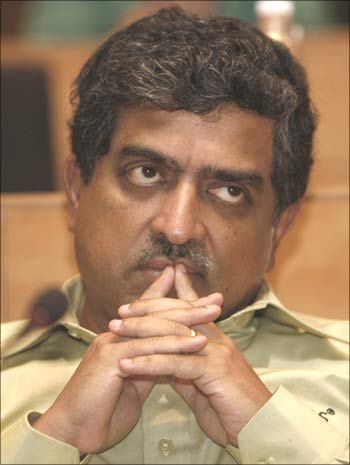 When Nandan Nilekani stepped down as the co-chairman of IT major Infosys Technologies to head the Unique Identification Database Authority of India, it made big news.

Everyone in India was curious to know what the Infosys co-founder plans to do.

It has been just over a month since Nilekani took charge of the UIDAI on July 13. And already Nilekani and his team are up to their neck in work -- setting up an office, building a team as also outlining the project.

In a candid interview, Nilekani spoke about the UIDAI project, what it plans to achieve, and more...

Why is it necessary to have these unique identification numbers?

The unique identification numbers will take into account the database of the poor and the marginalised people, mostly living in the rural areas.

The numbers will, for the first time, provide an identity to those who need it the most.

Do you think it is a significant step taken by the government?

Oh, yes! The project has great potential as it sets out to take within its purview the not-so-privileged residents of India.

The project is still in its first lap and it won't be proper for me to jump the gun. Yet, let me tell you if it achieves what it sets out to achieve, it will be a very important step into the future. 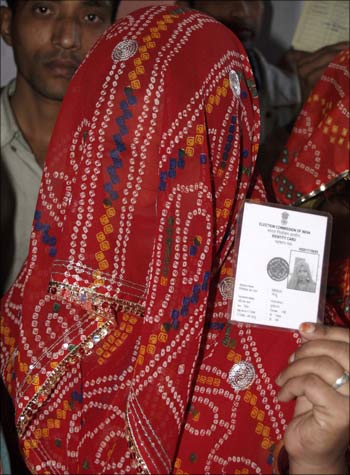 Image: A woman shows her voter identity card as she waits for her turn to cast her ballot at a polling station in Bikaner.
Photographs: Vinay Joshi/Reuters

The unique identification number will contain the full details about any individual. Won't it, therefore, affect the civil liberty? How can we be sure that the state won't misuse such information?

It will just authenticate certain facts about an individual. It will only verify if a certain person's claim for identity is true or not.

We are in constant touch with various government departments, civil societies at the moment. While compiling the database, we have to strike a balance between privacy and purpose.

The project is still at its initial phase. A lot of work needs to be done.

Have you zeroed in on the information that the UIDs carry?

Let me state once again, the project is still at its very first phase. It will take us a few more months before we arrive at a final structure. 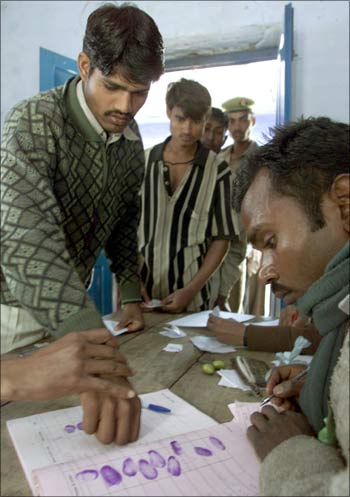 Is it similar to the social security number in the United States?

They are somewhat similar but unlike the social security numbers, the UIDs will have the individuals' photographs and the biometrics.

In short, UIDs will have unique information to identify the residents of India.

By biometrics, do you mean fingerprints?

We are still in talks with the Biometrics Committee. And the general consensus is inclined towards the fact that we would have fingerprints. Yet, no final decision has been taken so far. Only the process has been initiated.

When will be the first set of unique identification numbers issued? Has a date been set?

The first set of numbers, as was stated by the Finance Minister Pranab Mukherjee during his Budget Speech, will be issued in 12 to 18 months.

Are you sure you could meet the deadline?

Yes. The first set of numbers will be issued in 12 to 18 months.

How will the numbers be selected?

The numbers will be selected randomly.

You will not take the cue from data like someone's date of birth, etc?

No. If your UID has your date of birth in it, I will know your age. Would you like that (laughs)?

When will the exercise for registering the names start? Will it be online? How can people in rural areas get themselves registered?

We will have a central depository where we will keep the details of each individual. Then we have multiple registrars -- for example -- NREGA (National Rural Employment Guarantee Act), regional passport offices, income tax department, public distribution system, etc.

While delivering any service, these registrars will enroll the people into the system. And while being enrolled, people will be given their unique identification numbers. 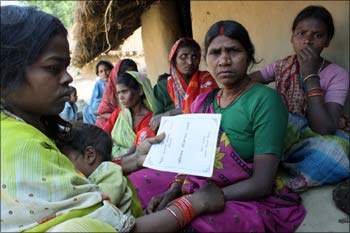 Image: A labourer displays her job card, given under the NREGA, plan at Korhar village near Patna.
Photographs: Stringer/Reuters

Basically, therefore, the UIDs will only ensure that there is no duplication in residents' identity data, right?

Yes. It will verify and authenticate those details.

Where will the project kickstart -- in Delhi?

It depends on our partners. We announced on August 20 that NREGA will be our partner. And NREGA, as you know, is operational across India.

Therefore, whichever state rolls out the list of the names first will have the UIDs first. The project can get initiated in any part of the country for that matter.

Please tell us more about your partnership with NREGA.

The process of enrolment for NREGA will have to be standardised the way UIDs will be given.

We are having discussions on how the address verification is to be done, how fingerprints are to be captured and how the standardisation can be percolated to the entire eco system.

Is Rs 120 crore (Rs 1.2 billion) sufficient for such an ambitious project?

We have just started working on the UID. A lot of work is still on our anvil. We have to get a new office, have to recruit staff, have to take care of the logistics. Therefore, the money that we have with us now is taking care of the work at hand.

But during the course of our journey, we can always go back to the government and ask for more.

How different will this UID be from Permanent Account Number (PAN)?

PAN will be one of our enrolling partners. It has been decided that the UID will be embedded in new PAN cards that will be issued once the UID project gets underway. We have had fruitful discussions on this with the income tax department. 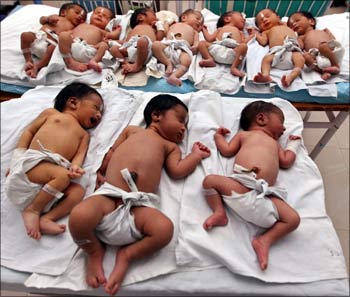 Image: Newly born babies rest inside a ward at a hospital in Lucknow.
Photographs: Pawan Kumar/Reuters

What about those people who already have PAN cards?

They will be issued a letter containing the UID. For those who will be getting new PAN or NREGA cards, passports, etc, henceforth, the numbers will be embedded in that.

These numbers, you have said, will not only provide an identity to residents but also help them in obtaining benefits of government schemes and undertake with ease activities like opening bank accounts, availing an electricity connection, etc.

Yes, these numbers will be unique in the sense that residents would no longer need to go to various government departments and prove their identity each time.

For instance, someone travelling from a village to New Delhi can prove his identity simply by mentioning the UID number.

How do you propose to update the information? For instance, when a child is born, he or she will mostly have the parents' details. . .

When a child is born, the parents will need to get the birth registered. And that data will reach us.

Do you think a villager will register the birth of a child?

Yes. For, we are working on a demand-based process. The villager will register the childbirth as he/she sees value in registration. Such registration will come with a lot of benefits. For instance, it will ensure the child's immunisation process.

Does India have the infrastructure to protect this extremely sensitive information from falling into wrong hands?

Though we are in the early stages of the project, we will take utmost care to make the database absolutely free from hacking.

We do assure you that once the project takes off, we will take all preventive measures possible so that it does not fall 'into wrong hands'. 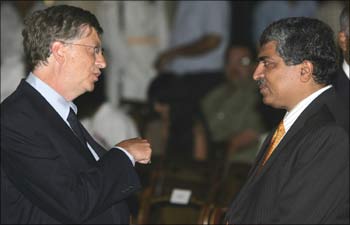 You had told the media soon after taking charge that you would be picking up best available talent from government as well as private sector, to prepare the database for every resident. Have you been able to build a good team?

Recently, IAS officer Ram Sevak Sharma joined us from Jharkhand. Mr Sharma has been appointed director general of the UIDAI. He is like the chief executive officer of the organisation.

I have also got Srikar Sridhar as my personal secretary. He is an officer of great capability.

I am in touch with some really good, qualified, competent people from the government. We are trying to rope in the best and the brightest from within the system and also from outside.

Bill Gates mentioned during his visit to India that he would like to be your partner...

It was just a conversation. He was here in Delhi and we talked.

There is no possibility, therefore, of a partnership with Gates?

As I said, it was just a conversation that I had with Gates. (Pauses) We are having meetings with personalities from across the world.

The UIDs will be created on the basis of the data available to the system. Numbers will only be given to those individuals who are in it.

Our mandate is to provide numbers to residents of India and no one else. 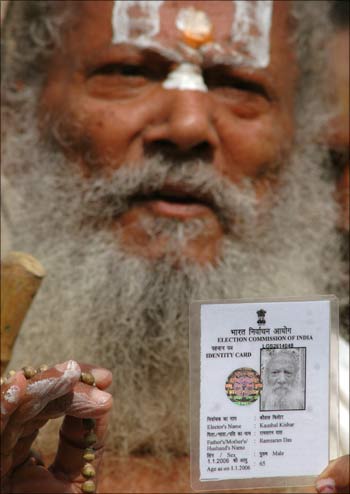 It is heard that for database, you are taking into account oil and cooking gas consumers, PAN card holders, Election Commission's list of voters and census figures. At times, media reports talk about false voter ID cards, fake PAN cards, etc. How will UIDs counter this?

As I said earlier, we are working with various partners like the NREGA, PAN, etc. Once the project is initiated, it will definitely be able to counter duplication.

For instance, once Indians are provided with UIDs, the same will prevent people from getting second 'fake' ration cards, voter ID cards or PAN cards as the case may be.

The government will thereafter decide what steps should be taken against those trying to obtain fake documents.

The project, we have heard, is based on computer application called SCOSTA. A recent PTI report also said C-DOT, a research and development organisation of the telecom sector, is studying if the unique identity number could be converted into mobile number. Your comments.

(Smiles). The project, as I said, is still in its initial stage. Its architecture is being built. Design will come much later. And the software belongs to the design part. 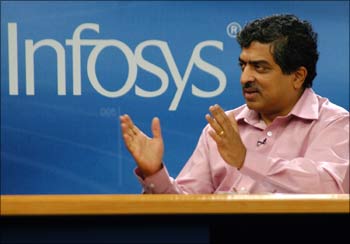 Don't you miss Infosys? What is it about Infosys that you miss the most?

It's difficult not to miss Infosys, having spent about 30 years there. And now I am in a different world. It's an entirely different path that I am walking on at the moment.

There are so many things that I miss about Infosys, the camaraderie, people around me, my colleagues, the ambience.

But then, I am very impressed with the people I am meeting now while working on the UID project. There are great talents within the government.

Also, we are getting e-mails from people all over the world. They are expressing their intent to work with us.

It's great to know that there is a sense of purpose in this project.

Could you please list five advantages and disadvantages of the unique identification numbers?

Let's talk about the advantages first.

As for the disadvantages, it is a large and complex project. We do have to take into consideration the fact that people have concerns about security and surveillance.

We have to pay attention to the fact that people are being sensitive about the state having key information about them. We have to see to it that people's privacy is not compromised.