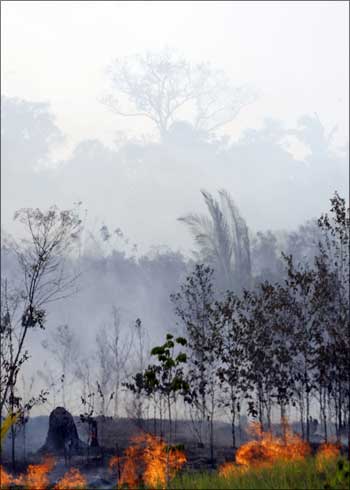 From December 7, 2009, environment ministers and officials will meet in Copenhagen for the United Nations climate conference to thrash out a successor to the Kyoto protocol. The conference, held at the modern Bella Center, will run for two weeks.

One hundred-and-ninety-two countries have signed the climate change convention. More than 15,000 officials, advisers, diplomats, protestors and journalists are expected to attend the meet, joined by heads of state.

Developing countries, including India and China, believe it is the responsibility of wealthy industrialised nations such as the United Kingdom and the United States to set a clear example on cutting carbon emissions.

It maybe mentioned that the US had rejected the 1997 Kyoto Protocol, with the then US President George W Bush arguing that the 5 per cent reductions required by Kyoto would 'wreck the American economy'.

However, Copenhagen sees a glimmer of hope on President Barack Obama's stated intention to achieve an 80 per cent reduction of greenhouse gas emissions by 2050. Some people have even named the event, the 'Hopenhagen' Summit.

Click on NEXT to read more about just what this is all about, and where does India stand on the issue. . . 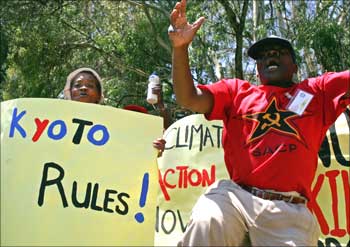 What is Kyoto Protocol?

The Kyoto Protocol is an international agreement linked to the United Nations Framework Convention on Climate Change. The major feature of the Kyoto Protocol is that it sets binding targets for 37 industrialised countries and the European Community for reducing greenhouse gas (GHG) emissions.

Emission limits do not include emissions by international aviation and shipping, but are in addition to the industrial gases, chlorofluorocarbons, or CFCs.

The Protocol was initially adopted on December 11, 1997 in Kyoto, Japan. As of November 2009, 187 states have signed and ratified the protocol.

The most notable non-member of the Protocol is the United States, which was responsible for 36.1 per cent of the 1990 emission levels. 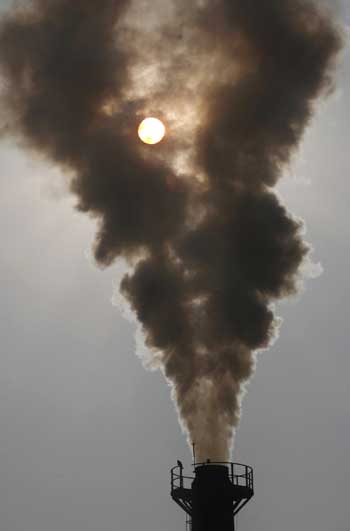 Of greenhouse gases and global warming

In our solar system, the atmospheres of Venus, Mars and Titan (a satellite of Saturn) also contain gases that cause greenhouse effects. Greenhouse gases greatly affect the temperature of the Earth; without them, Earth's surface would be on average about 33 degree centigrade (59 degree Fahrenheit) colder than at present.

Global warming is the increase in the average temperature of the Earth's near-surface air and oceans since the mid-20th century.

Global surface temperature increased 0.74 0.18 degree centigrade (1.33 0.32 degree fahrenheit) between the start and the end of the 20th century.

The Intergovernmental Panel on Climate Change (IPCC) concludes that most of the observed temperature increase since the middle of the 20th century was caused by increasing concentrations of greenhouse gases resulting from human activity such as fossil fuel burning and deforestation. 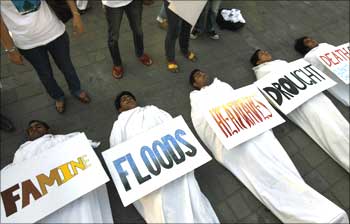 How will it impact India?

Asian megadeltas, such as the Ganga-Brahmaputra delta, are at risk because of large populations and high exposure to sea-level rise, storm surge and river flooding. Also, the Himalayan glaciers can melt leading to flooding, rock avalanches, disruption of water sources.

In tropical areas, crop yield is projected to decrease, even with relatively modest rises of 1-2 degrees centigrade in local temperature, increasing the risk of hunger. The changes in health will be most felt by those least able to adapt, such as the poor, the very young and the elderly.

What has India done till date?

India has also reportedly offered to cut energy intensity of its emissions by 20-25 per cent following similar moves from the US and China. Energy intensity means energy used per unit of income or output. This means that emissions will increase but slowly.

An emission intensity is the average emission rate of a given pollutant from a given source relative to the intensity of a specific activity. 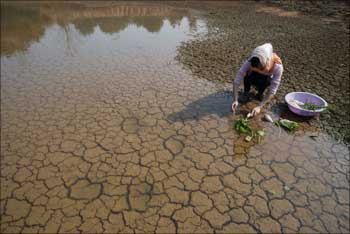 What do the US and China announcements on voluntary cuts imply?

The Centre for Science and Environment (CSE) said that for the US, the emission cap translates into a mere 3 per cent reduction below the 1990 levels while science demands that developed countries cut their emissions by 40 per cent below 1990 levels.

Besides, the US targets remain domestic and are not covered by a multilateral legally-binding agreement.

The CSE explains that China's emissions will continue to grow but at a slower rate. How much is actually achieved will depend on the rate at which the Chinese economy grows.

In other words, if the economy grows at 7 per cent per annum, then the emissions of China, after accounting for the 40-45 per cent energy intensity reduction target will grow by 50 per cent over 2005 levels.

If the economy grows at 10 per cent per annum, then the emissions will increase by 150 per cent over 2005 levels. 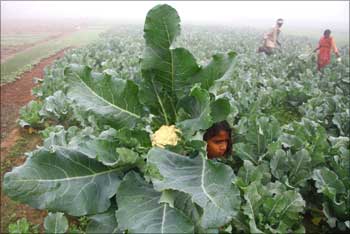 But why should India feel the pressure?

India's intensity of carbon dioxide or CO2 use is among the lowest in the world (and equal to that of Europe in 2007), and China's is among the highest.

India's trend decline in intensity is comparable to the world's average. However, the centre categorically states that in no way do these 'new' targets put pressure on India to commit to any reduction target. The current Indian per capita emission is 1.1 tonne. For the US, this figure is more than 20 tonnes.

India's energy intensity by unit of GDP has reduced from 0.3 kgoe (kilogramme of oil equivalent) per US$ GDP in PPP terms in 1980 to 0.16 kgoe currently. This is already lower than US and China and is comparable to Germany.

So, is the environment ministry moving away from India's stance on climate change and G-77 principles?

The government has to engage with all players across the spectrum. It is working on the principle of common but differentiated responsibility but in keeping with the G-77 principles, has not accepted any legally-binding cuts. 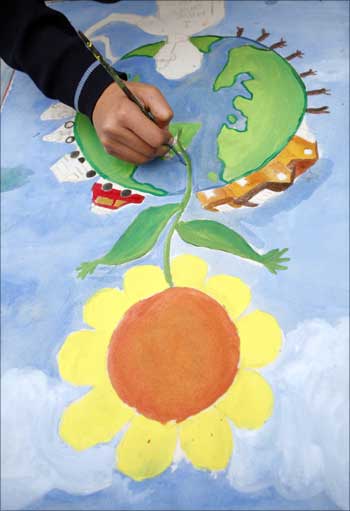 How climate change affects us

Among the trends already evident and which will accelerate if action is not taken, are: 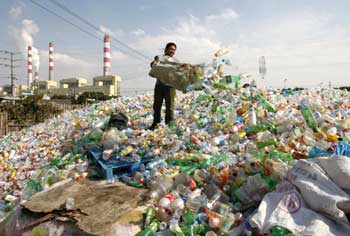 The major activities which are causing the greenhouse effect - the use of fossil fuels in the generation of energy (37.5%), transport (17.3%), industrial processes (22.2%) and agriculture (7.8%)2, provide the essential foundation of today's world economy.

It is these high emitting practices that must be replaced by new sustainable sources of energy, greater efficiency in the use of energy and more responsible land management.

Delaying action will only increase economic costs and physical damage from climate change in the long run.

Effective ways of generating, distributing and using energy must be developed and applied at scale. The world must assess the relative merits and importance of different transportable and non-transportable energy sources: cleaner coal, gas, nuclear, wind, solar, wave and tidal, geothermal and other sources of climate responsible energy.

New ways of fueling cars and other forms of transport must be developed and applied including the use of hydrogen fuel cells, sustainable biofuels, and electric engines.

Farming practices need to become more productive and sustainable. Other methods should be reductions through the sequestration of carbon in agricultural soils; the efficient utilisation of crop waste and understanding more ecologically complex interactions on farms.

Tropical forests are an indispensable element in earth's climate system. They not only hold large amounts of carbon, but through their transpiration create rainfall and actively cool earth. About half of the mature tropical forests that once covered the planet have been felled.

The interconnections between water, energy and climate are complex but essential to consider.

Climate change will lead to dramatic changes in the hydrological cycle, both in terms of water availability and quality, and in terms of intensification of extreme events such as floods and droughts. 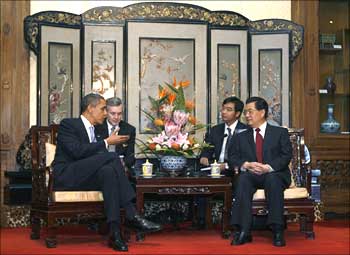 What Copenhagen Summit must achieve...

"The Copenhagen climate summit is not about a photo opportunity," said Kyle Ash, climate policy adviser for Greenpeace USA. "It's about getting a global agreement to stop climate chaos."

Officials will try to agree a new climate treaty as a successor to the Kyoto protocol, the first phase of which expires in 2012. According to Yvo de Boer, executive secretary of the UNFCCC, the four essentials needing an international agreement in Copenhagen are:

Developed economies must lead the way, with other countries becoming part of the system as soon as they are able.

Means to protect forests
Curbing deforestation and growing new forests, especially in the tropics, offers a way for the developed world to repay its historic carbon debt.

Promotion of sustainable agriculture
The new treaty must recognize the role of agricultural sustainability in addressing climate change.

Support for adaptation
It is critical that the new global treaty focuses resources on protecting people from the effects of global warming and climate change.

It is clear that improved energy efficiency can significantly slow emissions growth through employing existing technology. What is required now are the policy drivers to implement these efficiencies at scale. 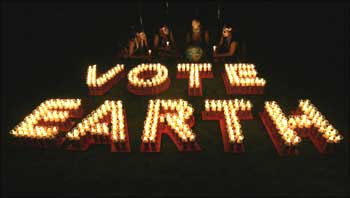 If the international community acts with urgency to establish a global treaty by 2012 which is fit for the purpose of limiting global warming to 2 degree centigrade, the task of achieving 450ppm (parts per million) of greenhouse gases in the atmosphere is both technically feasible and economically affordable.

It is a failure that is unaffordable - it could literally cost the earth.

The UN Copenhagen Summit in December 2009 is a key moment for our future. It must be the driver of this critical transformation.

Future generations are dependent upon us to safeguard the world they are born into. It is our responsibility and it is us who will be held to account. It falls upon us to make the difference.

Rich countries must put at least $10 billion a year on the table to kick-start immediate action up to 2012, the UN climate chief, Yvo de Boer, told reporters recently.