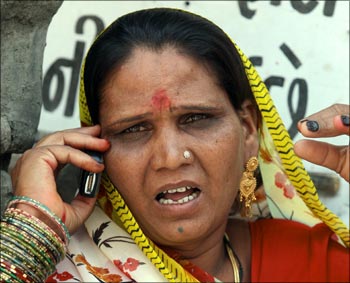 Two Indian-origin companies -- Gurgaon-based Vihaan Networks Ltd and Sunnyvae, California-based Bloom Energy -- along with Twitter, are among the 26 companies selected as Technology Pioneers in 2010 by the World Economic Forum on Thursday.

Technology Pioneers are chosen on the basis of six criteria: Innovation; Potential impact; Growth and sustainability; Proof of concept; Leadership; and the company must not currently be a Member of the World Economic Forum.

Mehrotra is working on the next wave: bringing mobile phone service to the more than one billion people who live in the world's poorest and remotest areas. VNL has developed a solar-powered GSM system specifically for remote and rural areas where people have less than US$ 2 a month to spend on their phone bills.

Bloom Energy aims to change the way the world generates and consumes energy by converting a wide range of renewable and traditional fuels into electricity through a highly efficient electrochemical reaction, rather than combustion.

If it works, homes, offices and factories could generate their own electricity and fuel their own vehicles, using local resources. In the developed world, this would help meet energy needs while reducing costs and the carbon footprint.

In the developing world, it would help give people access to power for the first time without huge investment in infrastructure or negative impact on the environment. Click NEXT to check out the other Tech Pioneers. . . 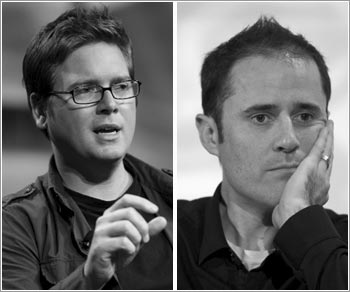 Twitter is a free social networking and microblogging service that enables its users to send and read others' updates, known as "tweets".

Tweets are text-based posts of up to 140 characters displayed on the author's profile page and delivered to followers who have subscribed to them. Users send and receive tweets via the Twitter site or via SMS.

Twitter sees mobile tweets as a real growth engine going forward. To that end, Twitter signed a deal in India with Bharti Airtel in October, allowing subscribers to receive tweets via SMS for free and send them for the standard text message rate.

Twitter has helped foster a unique form of information dissemination, changing the way individuals and companies share and get their information.

Aura Biosciences plans to commercialize powerful cancer drugs based on discoveries it has licensed from research institutions in France, Germany and the United Kingdom.

The firm's hollow particles, made of nano-sized protein shells, could radically improve delivery of approved cancer drugs, by keeping them stable as they travel through the body towards their intended target. By allowing cancer-killing drugs to go directly to tumour cells while avoiding healthy cells, the treatment could do away with the unwanted side effects of chemotherapy. The firm's technology will first be applied to pancreatic cancer.

Corventis makes a wireless cardiac monitor the size of a Band-Aid which has the potential to automate the provisioning of medical care in both developed and developing nations.

By allowing doctors to concentrate only on those patients experiencing problems, Corventis could lower the cost of health for everyone.

In emerging markets, it could make patient monitoring affordable in places where setting up expensive equipment is problematic. 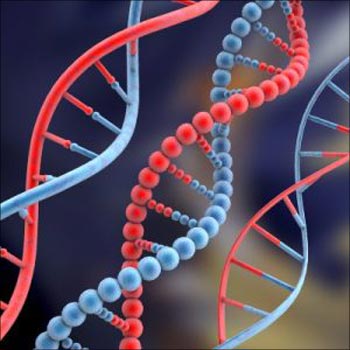 MicroCHIPS makes intelligent in-body devices for people who need treatments that are not orally available. The tiny chips allow drugs to be released in the right place in the body, at the right time and in the right amount.

MicroCHIPS' intelligent in-body devices have the potential to improve the health of millions of people with chronic conditions that require careful monitoring and precise therapy.

Pacific BioSciences' technology aims to eventually enable sequencing of an entire human genome for a few hundred dollars in less than 15 minutes. This speed and cost reduction could enable a new era of personalized medicine and molecular diagnostics, as well as giving scientists the ability to improve disease resistance in plants and potentially improve the world's food and energy supplies.

Until now, persistent blood vessel dilation was accomplished only through physical methods, including stretching, stenting and scraping, which often led to scarring and thrombosis.

Proteon Therapeutics' PRT-201 claims to be the first and only fully biologic method of persistent blood vessel dilation.

As such, PRT-201 has the potential to become the standard of care in reducing the failure of vascular access sites in patients with chronic kidney disease, helping to lessen morbidity and suffering. It could also save healthcare systems some of the billions of dollars a year spent treating vascular site failure and result in new and more effective treatments for patients with peripheral and coronary artery disease. 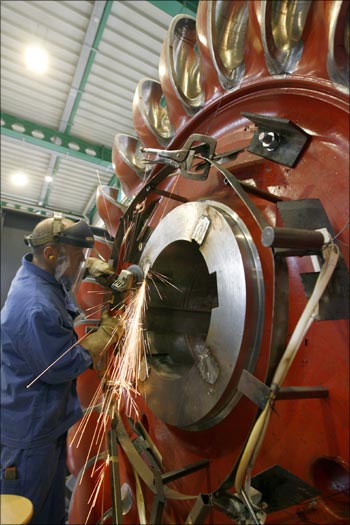 BioFuelBox enables communities to generate their own fuel while at the same time eliminating tens of millions of pounds of waste annually. The fuel that is produced classifies as an ultra-low emission fuel, as it has 85% less emissions than petroleum-based diesel, and can run in any unmodified diesel engine. Since the fuel is made from waste and is not a food crop, the resulting product is cost competitive with diesel, allowing for the possibility of widespread adoption.

Boston-Power is pioneering the use of lithium-ion and other materials capable of powering end applications ranging from portable consumer electronic devices to electric vehicles.

For portable power and transportation applications, such as notebook PCs and electric vehicles respectively, Boston-Power's cells promise to retain 80% or more of their capacity after thousands of charge and discharge cycles, offering reliable and sustained performance over an extended period of time. Its cells can be recharged to 80% capacity in 30 minutes -- up to 50% faster than conventional lithium-ion cells; produce less waste; and use fewer raw materials during manufacturing than traditional batteries.

Applying the technology to transportation and energy storage could help the world move away from its dependence on fossil fuels.

CARE has designed a turbine system that generates energy from the natural flow of a river, without any alternation of its natural state. 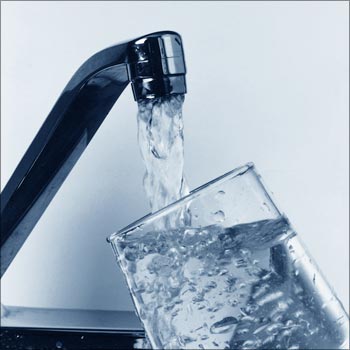 By greatly reducing the cost of wastewater treatment, more water can be recycled for drinking, helping the United Nations meet its goal to give 2 billion people access to clean water and sanitary facilities in the coming years.

eSolar aims to become the first solar electricity company to reach parity with the cost of fossil fuel. It hopes to achieve that goal with technology that concentrates the sunlight of one-square-meter mirrors to produce steam at centralized towers.

Gross, eSolar's founder, is confident that by obtaining 5% price reductions in six different areas, the company can reach parity with fossil fuels by 2015 and some day power all of Africa and Europe.

Lehigh's technology enables higher-value uses for end-of-life tires than burning or landfilling. Its engineered rubber powders can be used as a sustainable formulating additive for improving the environmental profile and performance characteristics of new tires, plastics and coatings. 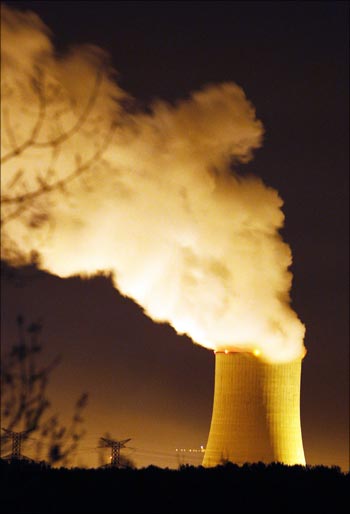 Metabolix aims to create a new class of materials that can serve as an alternative to petroleum-based plastics.

The bioscience being developed and commercialized by Metabolix is intended to lessen the world's dependence on oil, reduce CO2 emissions relative to traditional materials and address critical solid waste issues.

The construction industry is responsible for 52% of C02 emissions worldwide. Serious Materials is tackling that problem with high tech building materials that include super insulating products. It has reinvented drywall, replacing ingredients with 80% recycled content in a product it calls EcoRock.

Serious Materials is aiming to reduce world energy consumption by 75%, or by 12 terawatts, by the year 2040. If it works, these efficiencies will help reduce the world's energy needs while also saving businesses, governments and large organizations billions of dollars.

amiando is democratizing event planning, ticketing and promotion, disrupting traditional business models worldwide by providing professional, efficient online processes for the hundreds of thousands of small and mid-size events organized in Europe every year. It plans to expand beyond Europe beginning next year. 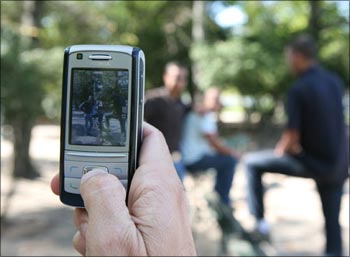 Amobee is reinventing the advertising model to make it work on mobile phones. Its technology allows communication companies to insert relevant, interactive advertisements into all types of mobile entertainment and communication channels, including videos, music, messaging and games.

CollabNet is transforming software development at companies around the world.

CollabNet is transforming the way in which leading organizations build software. Millions of users in more than 800 organizations, including Deutsche Bank and the US Department of Defense, use CollabNet, which enables geographically distributed software development teams to develop better software faster.

Dilithium's mobile video infrastructure solutions enable delivery of multimedia content over any mobile or broadband network and to any device, helping pave the way for mass market adoption of mobile video.

Dilithium's technology is already being used by operators in 60 countries, who collectively serve some 1.5 billion customers. 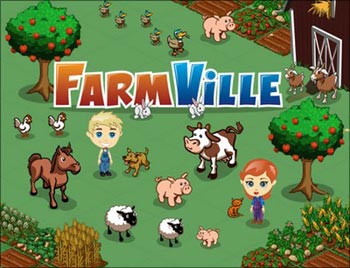 Innovid enables advertisers to embed their brands in the heart of video content and create a two-way communication between the viewers and the brand.

Advertisers and the tech industry have been searching for a way to make money from the massive amounts of Internet video traffic. Innovid can help them to do it.

Obopay is a mobile payment service that allows users to instantly get, send and spend money, top up their mobile, buy online, buy via mobile, pay bills and pay small businesses anywhere, any time, via text messaging and the Web.

Half the world, 2.5 billion adults, has no access to banking. Obopay's service, which looks set to transform the global banking industry, is currently available in the US and India, and will expand to additional markets in the near future.

Playfish, one of the world's largest and fastest growing social game companies, allows friends to play together over social and mobile platforms.

Playfish is changing the way the world plays games by creating more social and connected experiences. The traditional video game industry is currently worth  US$ 50 billion. Playfish intends to expand the game-playing audience beyond traditional video games to the 1.5 billion Web users and to the 3.5 billion mobile phone users, by focusing the entertainment experience on interaction between friends.

* Playfish was acquired by Electronic Arts in November 2009, one month after the Technology Pioneers selection process was finalized. 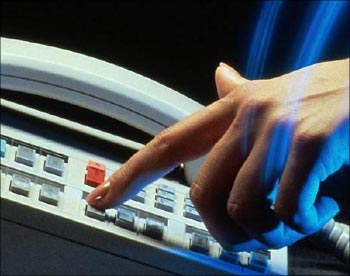 RingCentral has radically changed the cost structure for business phone systems from tens of thousands of dollars to as low as US$ 10 a month and is delivering these services in the US, Canada and the United Kingdom.

StreamBase's customers span government, e-commerce and capital markets. Competitors include substantial players such as IBM, Oracle, Microsoft and Sybase; however, StreamBase has already raised US$ 37 million in venture capital and is attracting marquee customers such as the Chicago Mercantile Exchange, the Royal Bank of Canada, the online travel agency Orbitz.com and the National Security Agency.

Ushahidi, which means "testimony" in Kiswahili, is a technology tool that facilitates the crowd sourcing of information during times of crisis, helping in disaster recovery or to draw attention to problems such as election fraud.

In a crisis, there is rarely a centralized point for reporting and searching for data. Ushahidi can help fill this gap by using Web 2.0 tools to gather reports from citizen journalists, governments, concerned outsiders and local organizations, and present it at a single location that is easily accessible to all.