Are Madoff's 150 years the most ever?

For much of America's history, white collar criminals considered themselves above the law. The right combination of top-tier lawyers and personal connections could get commuted even the most imposing of prison sentences.

And those who were sent away often went to so-called 'country club' prisons, which had all the amenities of fine hotel. They were, in fact, jokingly referred to as 'Club Fed' prisons, a pun on the 'Club Med', a chain of all-inclusive resorts.

But somewhere along the line, Americans because sick and tired of the double-standard. Why, they asked, were petty criminals locked up for years for their crimes of desperation, while calculating white-collar crooks generally avoided the long arm of the law?

In the late 1990s and early 2000s, judges began to hammer the most grievous of offenders with sentences of 30, 50 and even 100+ years. In essence, these were life sentences, and they were meted out as a way to make examples of criminals who flagrantly flouted the law.

The change has been enormous. Today, no other country approaches America in terms of stiffness of penalties for white-collar crime, save China, which routinely executes fraudsters and scamsters.

America's corporate crackdown culminated last week, in the sentencing of New York-based mega-fraudster Bernard Madoff, who was sentenced by Judge Denny Chin to 150 years for his massive $65 billion swindle in a dramatic and much anticipated hearing in New York federal court. It was the maximum allowable sentence.

Interestingly, Madoff's 150 year sentence is only the fourth longest given out for white-collar offences by US judges recently.

Here, a look at some other truly massive sentences. 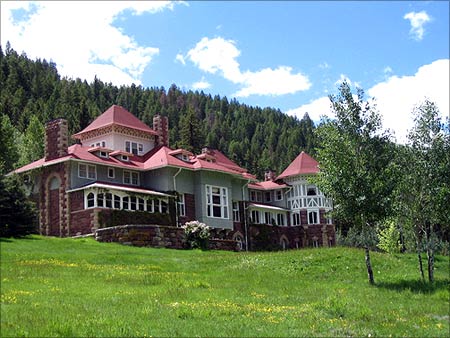 Talk about a life sentence. In 2000, racketeer maestros and general fraudsters Sholam Weiss and Keith Pound were handed the most devastating sentences in white collar history.

Weiss bore the worst of it, with an 845-year sentence from a Florida federal judge, plus nearly $300 million of fines and restitution, after being convicted on 78 counts in regards to the $450 million collapse of National Heritage Life Insurance.

In 2008, 72-year-old Norman Schmidt was made an example of, for running a fraudulent 'high yield' investment scheme that promised to double clients' money annually. In reality, Schmidt took tens of millions of dollars from his clients and used them for his own personal gain.

He bought the famed Redstone Castle estate in Colorado -- which is on the US's historic buildings registry -- and also scooped up at least NASCAR race cars.

To perpetuate the scheme, Schmidt would send investors fraudulent monthly statements which falsely reflected the growth of and earnings on their invested funds. In doing so, he'd discreetly request investors to refer new investors to his programme. He's currently serving a 330-year sentence.

Schmidt's right-hand man, Charles Lewis, got 30 years for his role in the $40 million Ponzi scheme.

His release date is set for 2032, but it's highly doubtful Lewis will to see it. He, like Schmidt, is in his seventies. 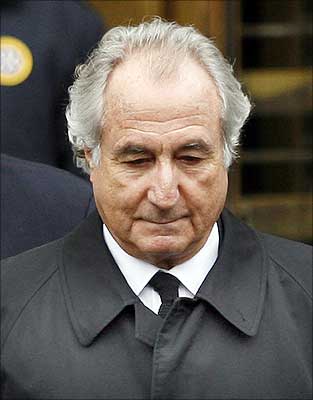 Financial whiz Will Hoover was one of Denver Colorado's top money managers until agents busted him on 44 felony counts of fraud, theft and racketeering.

He appealed after Denver District Judge Sheila Rappaport sentenced him to 100 years in jail for defrauding clients out of an estimated $13 million, saying his punishment was massively disproportionate to the crime. The Colorado Court of Appeals disagreed with Mr Hoover, who's currently serving his sentence.

In the Denver area, he's known as 'Hundred-Year Hoover'.

The infamous $65 billion swindler Mr Madoff comes next, with his whopping 150 year sentence.

The paper trail of money he'd established suddenly vanished, and left nothing but ruined fortunes in its wake. 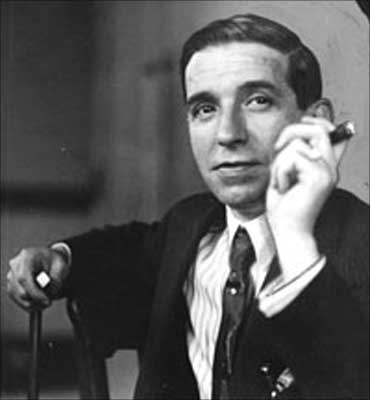 The so-called King of South Beach

We've moved out of triple digits, but still these sentences were used to make a point.

In 2001, Frederick Brandau, the architect of a $117 million Ponzi scheme was convicted and sentenced to 55 years.

As one of the early white collar criminals to be punished heavily, Brandau argued for leniency and plead for mercy, as he was in 60s during the sentencing process. But his sentence was upheld, and the judge made it clear: Brandau was being made an example of.

Garland Hogan, a co-defendant, had worked for Brandau for just 17 months when the whole thing collapsed. He got 28 years in prison and is first up for release in 2021.

For years Eduardo Masferrer was the so-called King of South Beach.

As one of Miami's most successful, and most visible, bankers, Masferrer lived the charmed life in one of America's high-flying cities. He was also one of the Hispanic-American community's big names in business.

But it all rapidly unravelled in the early 2000s, and culminated in federal authorities seizing his Hamilton Bank in 2002.

Turns out that Masferrer had been practicing accounting fraud for years inflating reports on the financial situation of his bank, thereby defrauding investors of at least $20 million.

Although a litany of charges, which included international offenses, added up to a possible 300 years in jail, notoriously tough US Federal District Judge Michael Moore, showed a modicum of mercy, and sentenced the then-57 year old to thirty years. 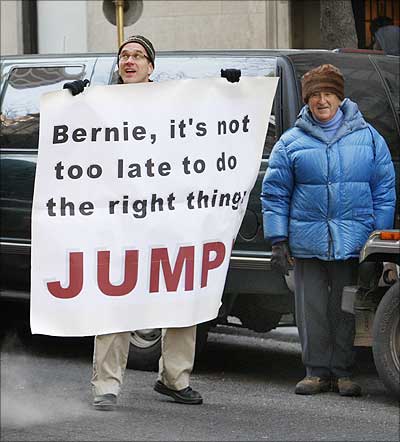 The Queen of Mortgage Fraud

A few years back, Chalana McFarland was a young and talented Atlanta-area attorney with a knack for closing real estate deals.

But when a mortgage fraud ring discovered in the area was traced back to her, McFarland was dubbed 'the queen of mortgage fraud', and sentenced to thirty years in prison, in one of the most controversial white-collar cases in recent memory. Although all her co-defendants plead guilty and received sentences of just a few years, Chalana refused to do so, determined to face trial.

She said that she had unwittingly fallen into a pre-existing trap, but didn't have the experience to get out and save herself. She also said she didn't want her young daughter to grow up without a daughter, a plea that gained traction with many in the Atlanta area. Because she is an African-American and had no prior criminal record, many accused the government of racism in handing her such a stiff penalty.

The prosecuting attorney, however, had a different interpretation of the case:

"The evidence in this case showed that Chalana McFarland was a master of mortgage fraud. As a closing attorney she had a responsibility to ensure that buyers, sellers, and documents were real and truthful, but instead she corrupted the entire system for her own profit. This is one of the largest cases of mortgage fraud in this district which devastated a number of local communities, and we believe the 30 year sentence in this case is entirely appropriate."

He went on to say that McFarland operated a scheme to falsely inflate property values using real-estate-flipping deals and straw buyers, which ultimately cost lenders about $20 million of defaulted loans.

When sentencing Lance Poulsen to 30 years, the 65-year-old former CEO of National Century Financial Enterprises, Judge Algenon Marbley of Federal District Court said Poulsen is "the architect of a fraud of such magnitude that it would make a sophisticated analyst shudder."

During the trial, others compared him to Ken Lay of Enron.

All told, most estimates of his fraud reach nearly $2 billion, with some accounts saying $3 billion.

Poulsen has always maintained his innocence, despite hard evidence that (in addition to the massive fraud) he offered a government witness $500,000 to keep quiet at his trial.

Interestingly, his co-defendant, Rebecca Parrett, left the country before she could be arrested, and has been on the lam ever since. She faces 60 years if and when she's caught. 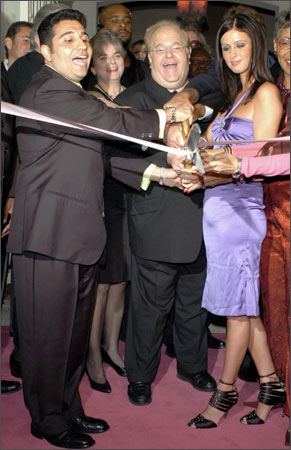 The man behind The Backstreet Boys

An African-American based in Texas, Robinson was given 27 years in jail for a mortgage fraud scheme that resulted in just $4.5 million in losses. The stiffness of the penalty did not match the severity of the crime, his supporters argued.

But the prosecution claimed that Robinson tactics were particularly nefarious, and had to be put to a stop. Robinson and his cohorts would buy properties at one price and turn around to sell them to straw buyers at higher prices, who would then intentionally default on their loans.

Lou Pearlman, whose trial made him perhaps the most famous Ponzi scheme 'artist' of all time before Madoff, managed the absolutely incredible: he created companies that existed only on paper, and got established and respected banks and individuals to invest in them.

He then pocketed the cash and used it however he saw fit. Pearlman, who also managed the US boy bands Backstreet Boys and 'N'Sync -- which gave him an air of respectability, as an entertainment mogul -- left behind more than $300 million in debts when he was finally nabbed.

He was sentenced to 25 years in prison in 2008, after pleading guilty to charges of conspiracy, money laundering and making false statements. 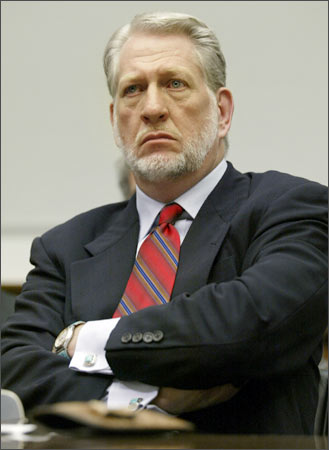 He drove to prison in his Mercedes

Worldcom co-founder and former CEO Bernie Ebbers, who was convicted in 2005 in the then-largest fraud case and accounting scandal in US history.

Although initially it was feared that over $3 billion had vanished, investigators were shocked to discover that, at the end of the paper trail, investors had actually lost $11 billion due to the telecom giant's false financial reporting.

Though the flippant Ebbers tried to separate himself from the situation by claiming ignorance of what happened directly under his nose, the justice system came down hard.

He is currently serving a 25-year prison term.

Ebbers famously drove himself to prison in his Mercedes.