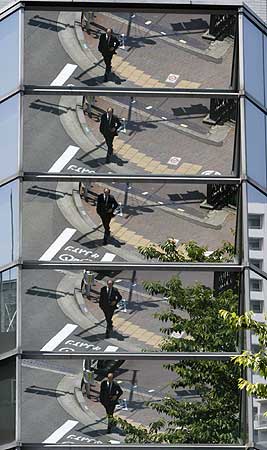 Image: A businessman is reflected on an office building in Tokyo.
Photographs: Toru Hanai/Reuters

Real estate, it is said, is heading south as direct fallout of the global economic crisis. Naturally, therefore, there has been a decline in rentals and Mumbai, known to be the most expensive city of India, has become lesser expensive for office space. However, the city remains at the sixth position among the world's costliest office markets, a report has said.

According to a report on global trends of office spaces by real estate consultant CB Richard Ellis, Mumbai fell to 6th position from 5th in the list of the world's most expensive office markets, which is topped by Tokyo.

"This ranking highlights the decrease in rentals we have witnessed in the last six months due to a reduction in demand. To reduce office occupancy costs further and facilitate more supply of office space, we need to urgently improve our infrastructure and amenities. This would bring our world rankings down further and make India more competitive," CBRE chairman and managing director (South Asia) Anshuman Magazine said.

Let's take a look at the world's 12 most expensive office hotspots. . .

Tokyo (Inner Central) bags the top position with office rental rates at $220.25 as of 2008. Market conditions in 2009 remained tight and the business prospects weak affecting rentals in the city.

However, Tokyo remains one of the three world finance 'command centres', along with New York and London.

Tokyo has the largest metropolitan economy in the world. As of 2008, 47 of the companies listed on the Global 500 are based in Tokyo.

Tokyo is a major international finance centre, is the headquarters of several of the world's largest investment banks and insurance companies, and serves as a hub for Japan's transportation, publishing, and broadcasting industries. 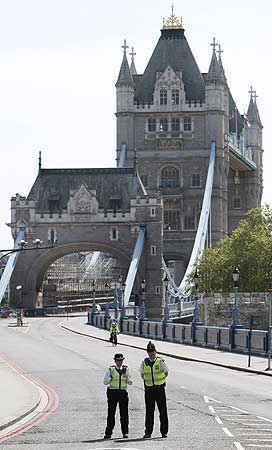 The elite West End of London has many of the city's major tourist spots, business headquarters and the West End theatres. 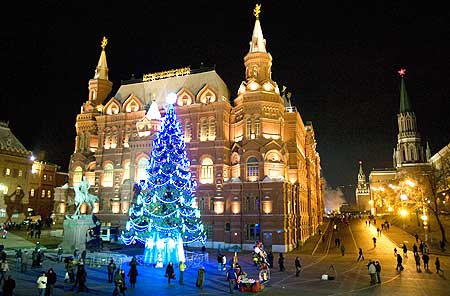 The capital of Russia is the economic, financial, educational, and transportation hub of the country.

At $180.78, Moscow joined the top five, jumping three spots to the 3rd rank. A major financial hub, Russia is also home to many billionaires. It is also known for many scientific and educational institutions.

It has an excellent transport system with the world's busiest metro system. 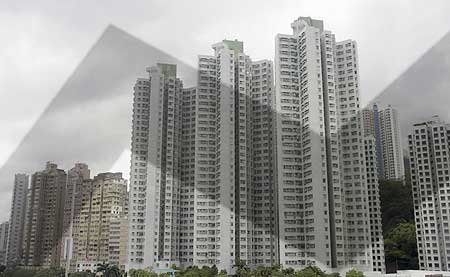 Image: A curve is seen through the window of a bus printed with an advertisement in Hong Kong.
Photographs: Aaron Tam/Reuters
Hong Kong (Central business district); Rank 4

Hong Kong is a global metropolitan and international financial centre and has a highly developed capitalist economy.

It is an important centre for international finance and trade, with one of the greatest concentration of corporate headquarters in the Asia-Pacific region, and is known as one of the Four Asian Tigers for its high growth rates and rapid industrialisation between the 1960s and 1990s.

The Hong Kong Stock Exchange is the sixth largest in the world.

Hong Kong's economy is dominated by the service sector, which accounts for over 90% of its GDP, while industry now constitutes just 9 per cent. 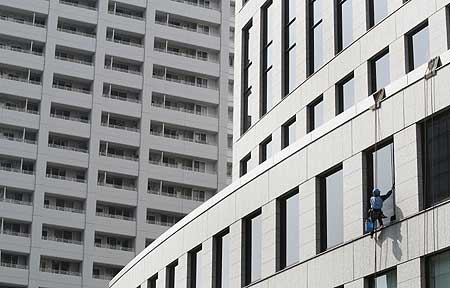 Image: A window cleaner works on a building of an investment bank at a business district in Tokyo.
Photographs: Kim Kyung-Hoon/Reuters

Tokyo was rated by the Economist Intelligence Unit as the most expensive city in the world for 14 years in a row ending in 2006.

Tokyo Bay was once a major source of fish. Presently, most of Tokyo's fish production comes from the outer islands, such as Izu Oshima and Hachijojima. Skipjack tuna, nori, and aji are among the ocean products. 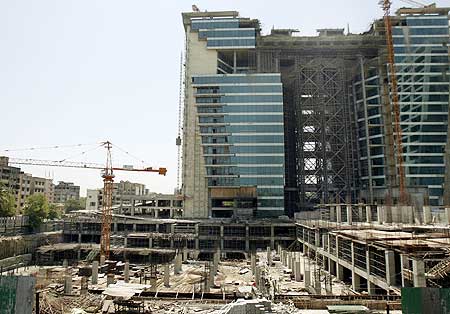 Image: The construction site of a building is seen in Mumbai.
Photographs: Punit Paranjpe/Reuters

With decline in rentals, Mumbai has become lesser expensive for office space, but remains at the sixth position among the world's costliest office markets, a report has said.

According to a report on global trends of office spaces by real estate consultant CB Richard Ellis, Mumbai fell to 6th position from 5th in the list of the world's most expensive office markets, which is topped by Tokyo.

Rentals at Mumbai's Nariman Point, zoomed to $189.51 in 2008. With a population of 13 million, Mumbai is the largest metro in India and the most populous city in the world.

Mumbai houses major financial institutions, such as the Reserve Bank of India, Bombay Stock Exchange, National Stock Exchange and is the headquarter to many Indian and multinational companies. 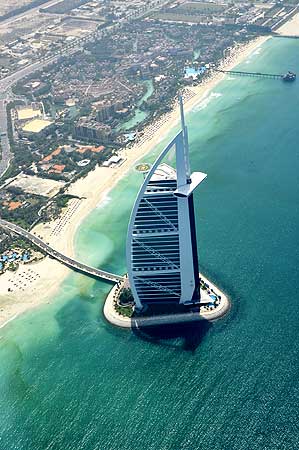 Image: An aerial image with the Burj Al Arab in the foreground, shows the approaching 'red tide', on the shores of Dubai.
Photographs: STR New/Reuters

Dubai is the most populous city of the United Arab Emirates. The emirate's main revenues are from tourism, real estate and financial services.

Dubai's economy is built on the back of the oil industry. It is estimated that Dubai produces 240,000 barrels of oil a day and substantial quantities of gas from offshore fields.

Dubai's real estate market has experienced a major downturn in the recent months, as a result of the slowing economic climate.

As of February 2009 Dubai's foreign debt is estimated at approximately $100 billion. 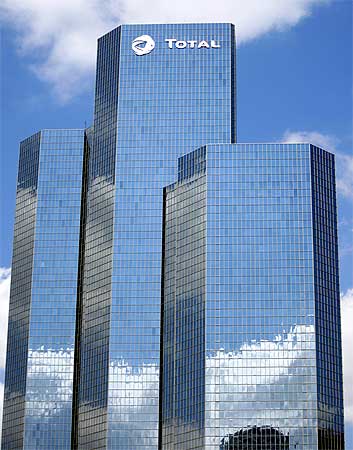 Image: Logo of French oil company Total is seen on a building in the financial district of la Defense near Paris.
Photographs: Charles Platiau/Reuters

Paris, the world's fashion capital, with rentals at $141.98 is at the 8th position among the most expensive office spots. A general slowdown was evident in the market by late 2008 and early 2009 with less business activity. 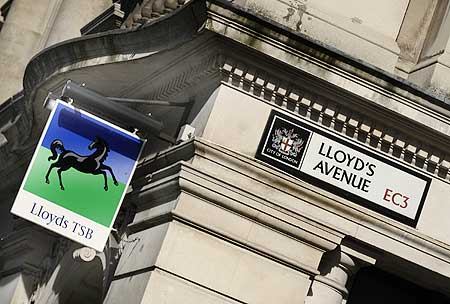 Image: A Lloyds TSB branch sign is seen next to a street sign in The City of London.
Photographs: Toby Melville/Reuters

London city's rentals are hitting $164.18 (approximately). However, the recent sub-prime mortgage crisis hit the financial activity in the UK.

This lead to a fall in business volumes and employment. Though rentals grew in the city, central London and other cities saw occupancy levels fall compared to 2007.

The central London prime index fell for the first time in 4 years by 2.1 per cent. 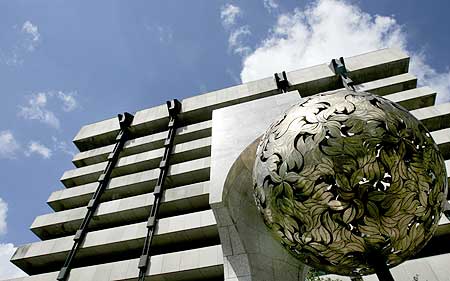 Image: A general view of the Central Bank and Financial Services Authority of Ireland in Dublin.
Photographs: Luke MacGregor/Reuters

Dublin meaning 'town of the hurdled ford' is both the largest city and capital of Ireland. Today, it is ranked 10th in the Global Financial Centres Index and has one of the fastest growing populations of any European capital city.

Dublin has been at the centre of Ireland's phenomenal economic growth and subsequent current economic contraction over the last 10 15 years.

In 2008, Dublin was listed as the fifth-richest city in the world.

However, it has the second highest wages for a city in the world, ahead of both New York City and London, though behind Z rich.

The city's economic boom led to a sharp increase in construction, which is now also a major employer. 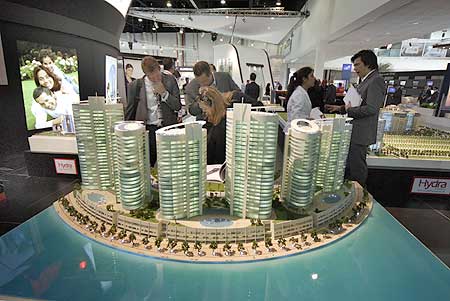 Abu Dhabi is the capital and second most populous city in the United Arab Emirates after Dubai.

One of the world's largest producers of oil, Abu Dhabi has actively attempted to diversify its economy in recent years through investments in financial services and tourism.

Abu Dhabi is the wealthiest emirate of the UAE in terms of Gross Domestic Product and per capita income. 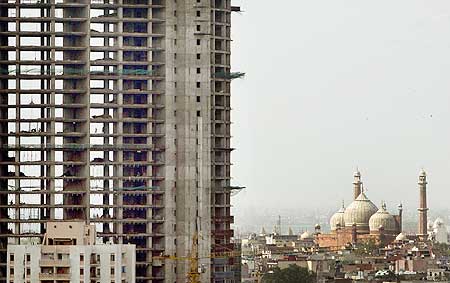 The national capital's ranking rose to 12th place mainly because of shortage of prime office complexes in Delhi.

It had occupied 13th position in the consultant's last findings in November 2008.

The office rentals are at $145.16. The occupancy rates in the Asia Pacific region are growing at an average of 37.6 per cent among the region's 11 places that have made it to the fastest growing rentals' list.