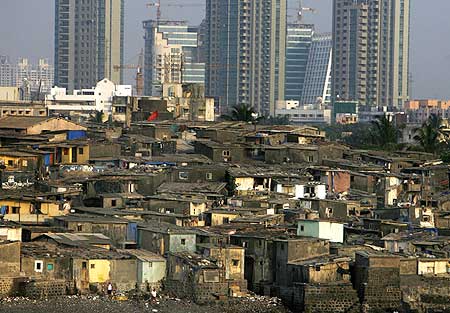 Does low-cost housing make economic sense? It seems to.

Developers believe the loss in margins (20 per cent in affordable housing, against 50-300 per cent in case of premium housing) can be made up somewhat by the sheer volumes of sales. Rajeev Talwar, group executive director of DLF, says: "Every group has to chart out its strategy. We have decided to take on the market by pricing our products 30 per cent lower than others, even if it means less margins."

In any case, as Rashesh Shah, chairman of brokerage firm Edelweiss points out, the days of making a killing are over.

"Sales weren't happening anyway and developers have finally realised that they would survive only if they brought prices down," Shah says.

That realisation has prompted developers to tweak their strategies and reduce apartment sizes to attract home buyers.

For instance, Unitech has stopped giving modular kitchens and is laying vitrified tiles instead of expensive marbles in its affordable housing projects, apart from cutting parking and basement space.

It also restricts the total floors in a building to three-four to save on construction costs. 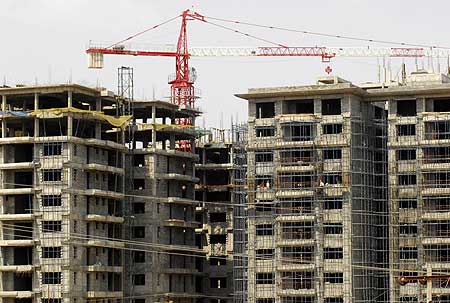 "The average cost of our land is Rs 200 a sq ft and construction cost varies from Rs 900-1,500 a sq ft. In affordable projects, we keep construction cost to the bare minimum. We design our buildings and use materials accordingly," says a Unitech official.

DLF, too, is changing its housing designs in Gurgaon to squeeze in more two-bedroom units.

While others, such as Unitech, Ansal API and Omaxe, import sanitaryware and fittings from countries such as China, Malaysia and others, as these are 10-15 per cent cheaper than Indian products. 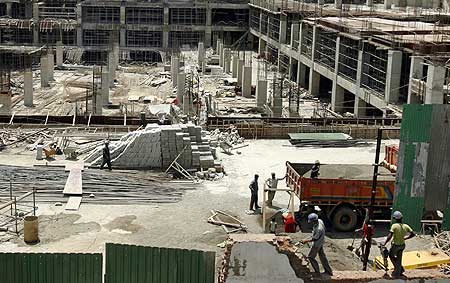 Image: Labourers work at the construction site of a building in Mumbai.
Photographs: Punit Paranjpe/Reuters

Most developers are also focusing on completing their housing projects in 30 months instead of the earlier 36 months, using advanced technology.

Tata Housing, which is building 15,000 low-cost homes in the country, is keeping construction cost to about Rs 700 a sq ft by sharing returns with the land owners, according to managing director Brotin Banerjee.

The company is in advanced stages of talks with the Delhi-based Raheja Developers (which owns the land) to initiate a similar low-cost project at Manesar near Gurgaon. The apartment size will range between 283 sq ft and 465 sq ft each.

Plans are on the anvil to start similar projects, called Shubh Griha, in Chennai and Kolkata and, subsequently, in other Tier-I and Tier-II cities.

A marginal part was also played by the lower input costs of steel and cement, which has seen some softening in the last 12-18 months. 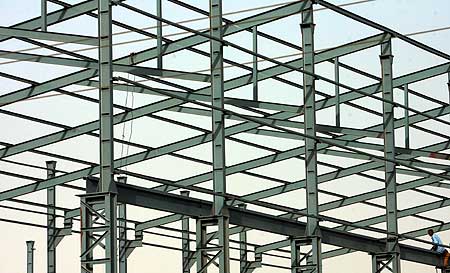 Image: A worker sits on a steel beam at a construction site near Bhavnagar, Gujarat.
Photographs: Arko Datta/Reuters

All's not over for premium

Unitech's GM (Corporate Planning) R Nagaraju could have been exaggerating when he said premium housing had become extinct. The fact is quite a few companies are still operating at different price-points and the real estate market has got segmented,though with a bias towards low-cost projects.

The complex would have about 180-200 apartments and is getting an encouraging response. For Tata Housing, too, Shubh Griha is just one of the eight projects the company is taking up. But, going forward, the company expects low-cost housing to have a 20-25 per cent share in the total mix, while another 25-30 per cent would be accounted by mid-income homes, with high-end products taking up the balance. 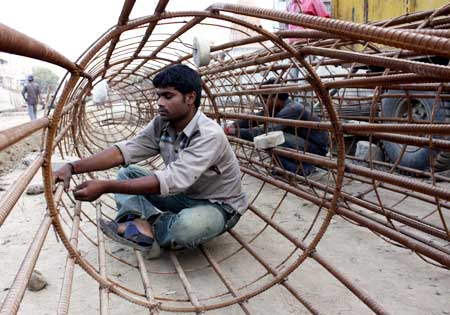 Abhishek Lodha, director of the Lodha group, says the company would build premium housing for margins, and mid-income housing for volumes.

The company has launched five mid-income housing projects in Mumbai and an equal number of high-end projects in South Central Mumbai. The Lodha Bellissimo in Mumbai's Mahalaxmi area, for example, is offering super-luxury apartments spread across 48 floors.

Or, take Emaar MGF, for example. The company recently launched 'The Terraces' with an aim to cater to the growing mid-market segment. Phase-I of the project is expected to be completed by 2010, with units priced at Rs 36 lakh (Rs 3.6 million) onwards.

It would house three independent dwelling units, with the ground floor priced at Rs 46 lakh (Rs 4.6 million), first floor at Rs 38 lakh (Rs 3.8 million) and the second floor at Rs 36 lakh -- not exactly low-cost, but affordable for the mid-income population.

The company, however, is also operating at a much higher price-point too -- Commonwealth Village, for example, despite the temporary hiccups.

Many also say it's just a matter of time before the premium housing market comes alive. Aditi Vijayakar, executive director (residential), Cushman & Wakefield, says: "In the future, as the demand for luxury projects gains momentum, big players will once again change their portfolio to high-end apartments."

Then there are, of course, recession-proof areas, like Mumbai's Bandra or Santa Cruz. Prices continue to rule high at Rs 20,000-40,000 a sq ft, mainly because of the demand-supply mismatch and the aspirational value.

Real estate developers all over the country must be hoping the tag extends to many other areas as well.