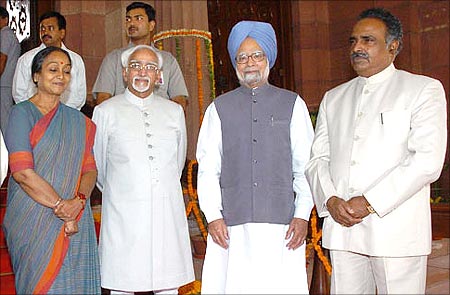 One of the cleanest politicians in India, the 76-year-old shone like a jewel as the country's finance minister in P V Narasimha Rao's government in 1991 when he took over while India teetered on the brink of bankruptcy.

Now, he has a task that is equally significant: the 100-day plan.

Even as the world struggles to find a way out of the recessionary vortex, India is thinking of keeping it blistering growth rate from flagging. And the prime minister has already made it clear that a 'mere 7 per cent' growth would be wholly unsatisfactory.

On top of the prime minister's 100-day plan to revive the economy are ways to ensure food security and better implementation of the rural employment guarantee scheme besides several measures to boost growth.

"There are about 27.5 per cent existing people below the poverty line, it is a matter of deep concern and it is our solemn duty to do everything possible to see that this poverty comes down and comes down steeply in the next five years so that within a single generation we should get rid of chronic poverty, ignorance and disease which still afflict millions and millions of people in our country," Manmohan Singh said.

The government is set to enact National Food Security Act as per its manifesto to provide 25 kg of rice or wheat per month at Rs 3 a kg to below-poverty-line households in both rural and urban areas.

Financial sector reforms and divestment in state-owned companies to save the cash starved economy are in the pipeline. Image: Dr. Manmohan Singh with President Pratibha Patil
Photographs: Prime Minister's Website
This ambitious strategy for growth was planned during the election campaign. From divestment to relaxation of foreign direct investment (FDI) norms to implementation of big infrastructure projects to providing of jobs for the poor and food for all, the plan is if implemented will boost growth and revive the economy.

The prime minister is aiming for a 9-10 per cent growth. "Since our savings rate is as high as 35 per cent. If all work together, we can achieve a growth rate of 9-10 per cent, even if the world economy does not improve," he said.

The issue of black money which was an election issue will be dealt with. The government has promised steps to bring back black money in tax havens,

"The yearning of our young people for inclusiveness - economic, social and cultural - and the rejection of the forces of divisiveness and intolerance that my government spoke of in 2004 continues as both its inspiring vision and unfinished business," said President Pratibha Patil in her address on the government's plans ahead. 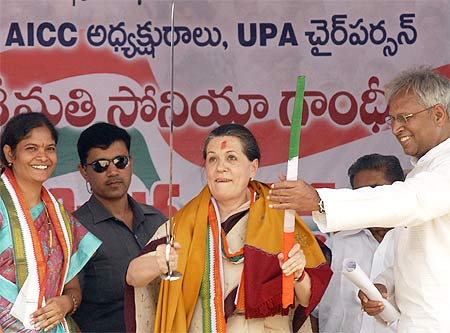 Image: Chief of India's ruling Congress party Sonia Gandhi holds a sword presented to her by a party member during an election campaign rally at Karimnagar north of Hyderabad.
Photographs: Krishnendu Halder/Reuters
Inclusive growth combined with fiscal prudence will be the mantra that the new United Progressive Alliance government will follow.

It plans to takes steps to boost foreign investment inflows and infuse more capital into banks.

The government will also look to easing the woes of the sectors that have been worst hit by the economic downturn, especially exports, textiles, housing, IT, automobiles, infrastructure, etc.

The textiles ministry, which has prepared a plan to train rural people in textiles processes, wants these trainees to be given work under the NREGS.

Meanwhile, industry bodies like the Confederation of Indian Industry and the Federation of Indian Chambers of Commerce and Industry have asked for cut in interest rates to spur the sagging economy while presenting their 100-day action plans to the government.

CII's key recommendations include monetisation of fiscal deficit and reducing interest rates to counter large government borrowings which are negating efforts of the Reserve Bank of India.

Ficci in its action plan asked the government to address the triple challenge of restoring economic growth to the 9 per cent-mark, ensuring national security and improving governance at all levels. 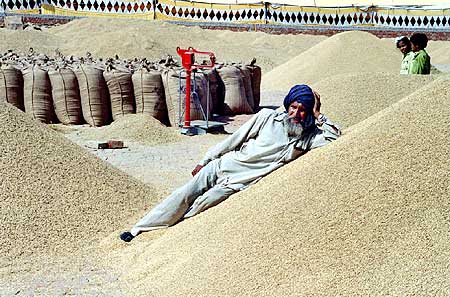 Image: An Indian farmer rests on the heap of paddy while awaiting for prospective buyers.
Photographs: Reuters
The National Rural Employment Guarantee Scheme (NREGS) will be expanded from 100 days work per family to 100 days per individual.

As a part of the ambitious Bharat Nirman project, roads, big infrastructure projects will be given speedy approval.

The government has set a 4 per cent growth for agriculture and a double-digit growth rate for manufacturing.

Farmers are among the worst hit in India. With prices falling for their products and a huge burden of debt, farmers are facing tough times. The government plans to ensure that farmers get a higher price for their commodities.

The government also plans to extend more sops to farmers who have repaid loans on schedule. Expanding welfare schemes for farmers are also on the anvil. 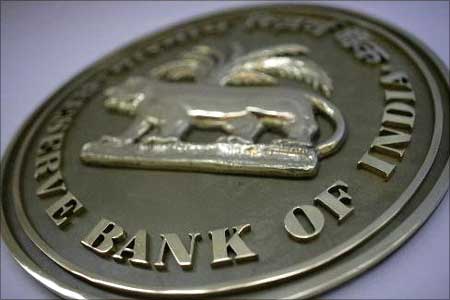 The power ministry will see more reforms, more capacity addition and big projects in Tamil Nadu, Gujarat and Orissa will get nod within 100 days.

The government will offer sops to exporters in the Budget. The exports sector has been hit hard by the fall in demand from various countries.

Focus on health of adolescent girls and universalisation of Integrated Child Development Scheme is also on the the PM's 100-day agenda.

The government also plans to set up a National Council for Higher Education in the first 100 days of its rule to create an autonomous education system.

The deregulation of oil prices is on the cards.