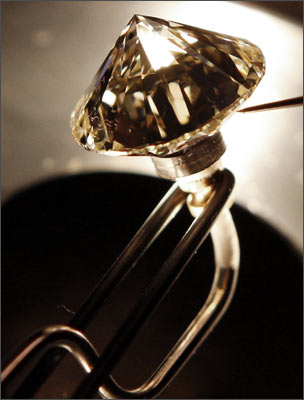 Image: A diamond is displayed at the certification level of the World Diamond Centre in Antwerp.
Photographs: Yves Herman/Reuters Rediff Business Desk

They are easily the world's most beautiful, and most envied, gemstones. They are used to express romance, flaunt one's status and even as insurance against bad times. Yes, we are talking about those scintillating stones, diamonds.

Many of the world's oldest diamonds have an incredible and, at times, bloodstained history.

Each of these magnificent gems is worth a fortune. Click on for a tour of the world's largest diamonds and the legends behind irresistible gems. 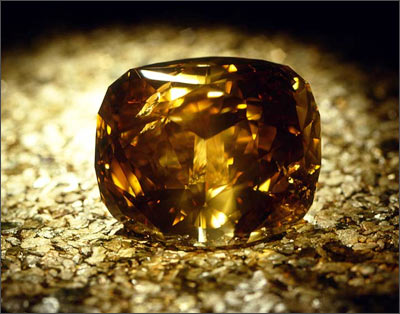 The USP of this diamond is its beautiful yellow-brown colour with a bright reddish hue at the centre. It is the largest faceted diamond in the word.

The Golden Jubilee weighed in at a whopping 755.50 carats when it was discovered in South Africa's Premier mine in 1986.

Considering its large size, as well as the fact that it had deep cracks from the interior and several inclusions, it was cut in a specially built, underground, vibration free room. The stone was finally ready in 1990, after two years of work. It now weighed an impressive 545.65 carats.

This stunning diamond was gifted to Thailand's King Bhumibol Adulyadej by his country's businessmen. In honour of the occasion -- the 50th anniversary of the King's ascent to the throne -- the diamond was named the Golden Jubilee.

The diamond is now on display in the Royal Museum at Pimammek Golden Temple Throne Hall in Bangkok. 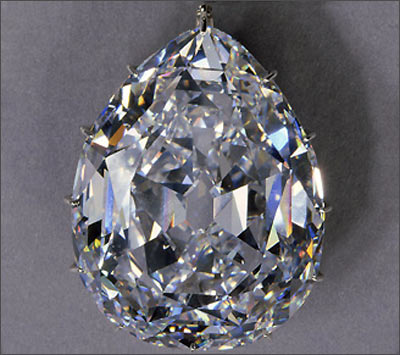 Accidentally discovered in South Africa's Premier diamond mine on January 26, 1905, the Cullinan was enormous. At 3,106 carats in the rough, it is the largest diamond ever discovered in human history. It was named after the mine's owner, Sir Thomas Cullinan.

The massive stone was presented to the reigning British monarch, King Edward VII, on his 66th birthday by the Transvaal government. In order to get the stone safely to England, a decoy was sent by ship; the original was mailed in plain box.

The cutting of the Cullinan, which yielded nine large pieces and around 100 smaller ones, began in February 1908.

The largest, a huge 530.20 carat stone cut in the shape of a pear, was mounted at the head of England's royal sceptre. It can be removed and worn as a pin or a pendant. 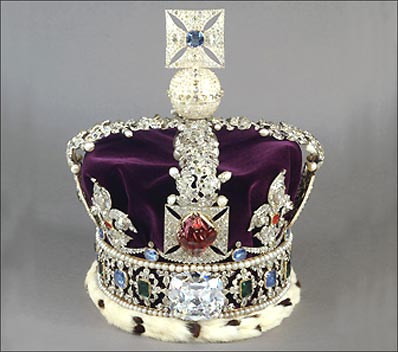 All the nine larger Cullinan diamonds are part of England's crown jewels.

The Cullinan II, also known as the Lesser Star of Africa, in mounted on the band of the royal English crown. It is impressively sized at 317.20 carats.

The Cullinan V (pear shape, 18.80 carats), originally made into a brooch for Queen Mary, later replaced the Koh-i-noor on the circlet of her crown.

The Cullinan IX, the smallest at 4.39 carats, was mounted as a ring for Queen Mary. Now, it is sometimes worn by Queen Elizabeth II. 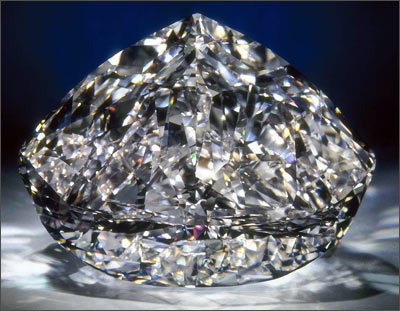 The original stone, which weighed in at a whopping 599 carats, was discovered in De Beers's premier mine in 1986. The rough shape of the stone, however, made it difficult to cut and there were even thoughts of cutting it into smaller stones.

In the end, Gabi Towkowsky, one of the world's most accomplished diamond cutters, said it would be made into one large modern-cut stone.

A special room, that took a year to construct, was prepared for the cutting of the diamond. After nearly a year of work, the Centenary, which weighed 273.85 carats and was shaped like a modified heart, was ready.

The Centenary's unique feature is its exceptional clarity; it has been graded as internally flawless. It is said to be the largest, faceted, D-colour, flawless diamond in the world.

While it has never been appraised for its value, the Centenary is known to have been insured for around $100 million at the time of its unveiling in May 1991. 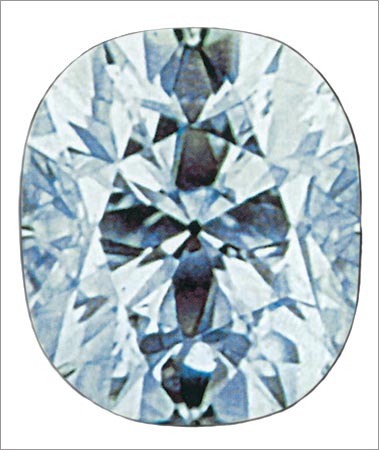 Discovered in South Africa, this rough 650.80 carat stone yielded a beautiful diamond of exceptional clarity and purity. Named the Jubilee in honour of the diamond jubilee of Queen Victoria's coronation, it is the fourth-largest, colourless, faceted diamond in the world.

It was purchased by Sir Dorabji Jamsetji Tata and was disposed off by his heirs after his death in 1932. Cartier's, who were to auction the diamond, put its sale tag at pound 75,000.

It was purchased by well-known French industrialist Monsieur Paul Louis Weiller, who allowed it to be displayed in several exhibitions around the world.

It is presently owned by Robert Mouawad, head of the international jewellery empire, Mouawad Jewellers, and a well-known collector of diamonds. It is the largest diamond in his collection and is known as the Mouawad Jubilee. 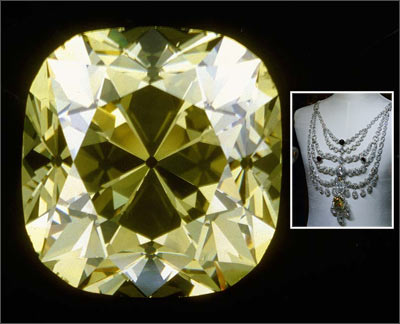 This enormous, light yellow diamond was discovered in the De Beers mine in March 1888. At 228.5 carats -- it shed 200 carats in the cutting stage -- it is the seventh largest cut diamond in the world.

It was bought by the Maharaja of Patiala and, in 1928, Cartier Paris set it as the centrepiece of a spectacular ceremonial necklace that came to be known as the Paitala necklace (inset).

With the dawn of India's independence in 1947, the necklace disappeared -- presumably, many of its famed precious stones, including the De Beers, were individually sold by family members. 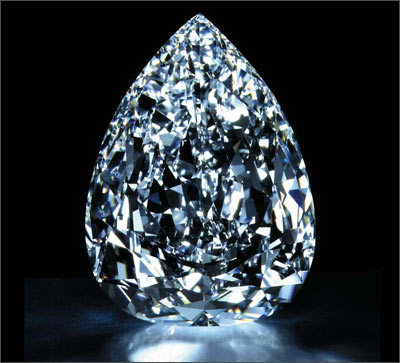 It is easily one of the most beautiful diamonds in the world, thanks to its clear colour and beautiful pear shape. It is also said to be the only diamond that is flawless both internally and externally.

The Millennium Star, which weighed 777 carats in the rough, is the sixth largest diamond ever discovered. It took three years to cut.

It was split in Belgium, polished in South Africa and finished in New York. The other diamonds it yielded included 11 rare blue diamonds with a total weight of 118 carats; the largest was the Heart of Eternity weighing 27.64 carats

Discovered in the in the Mbuji-Mayi district of Zaire in 1990, it was unnamed until it was unveiled to the world in October 1999 as the centrepiece of the De Beers Millennium Diamond Collection. Image: The Imperial diamond, now known as the Jacob diamond, is displayed in the National Musuem in New Delhi.
Photographs: Reuters

Cut to an impressive 184.75 carats (from a massive 457.5 carats in the rough), the diamond is known by various names -- the Victoria, the Imperial (both in honour of Britain's then reigning monarch) or the Great White diamond (because of its size and colour).

It was also known as the Jacob because of the famous gem dealer, Alexander Malcolm Jacob, who brokered its sale to Mahboob Ali Pasha, the sixth Nizam of Hyderabad, for pound 150,000.

The Nizam chose to keep the diamond in the sole of his footwear, where it was discovered after his death by his son and successor, Mir Usman Ali Khan. Khan, who was the last Nizam, was then one of the richest men in the world and used the diamond as a paperweight.

After the death of the Nizam's son, Azam, the family decided to sell some of the jewels to meet its huge tax liabilities. But the Government of India decreed the jewels a national treasure and said they could not be auctioned to foreigners.

After lengthy litigation that lasted years (1979 to 1993), the Indian government decided to buy the entire collection. It agreed to pay Rs 218 crores (Rs 2.18 billion), equivalent to about $70 million, for the entire collection; it was reported that the Jacob alone fetched $13 million. The deal was concluded on January 12, 1995.

The Indian government paid $71 million for the collection, which was valued by Sotheby's at $162 million and by Christie's at $135 million.

In 2001, when the collection was exhibited for the first time, it was valued at approximately $2.12 billion. The Jacob was valued at $85 million. 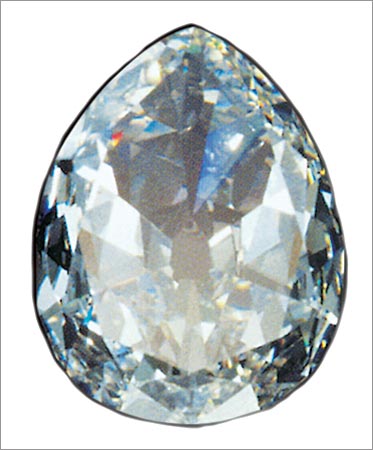 Like the Cullinan diamonds, the Centenary and the Millenium Star, the Premier Rose belongs to the 'purest of the pure' category; these extremely rare diamonds are flawless.

The Premier Rose was sold to an anonymous buyer for $10 million in 1979.

More recently, it was purchased by connoisseur Robert Mouawad for his collection of rare diamonds.

The Queen of Holland 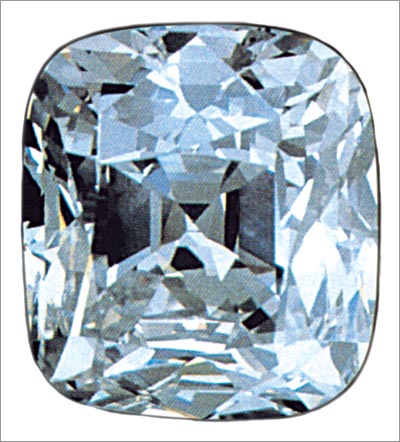 Nothing is known of the early history of this diamond. What is known, however, is that it made its appearance in Amsteradam, a renowned diamond cutting centre, in 1904 and was named after Holland's Queen Wilhelmina.

It weighs 135.92 carats and its exceptional quality, internal purity and D-colour, with a slight blue tint have led expects to speculate that it may have come from India's famed Golconda mines, which also yielded the Koh-i-noor.

It was purchased by the maharaja of Navanagar, famed cricketer Kumar Ranjitsinghji Vibhaji, who gave Cartier the responsibility of converting it into jewellery. Cartier set it as the centrepiece of a pendant to a magnificent ceremonial necklace.

The diamond remained with the maharaja's family until Cartier purchased it in 1960.

William Goldberg, who purchased the diamond, pared it from 136.25 carats to its present weight of 135.92 carats. He then sold it to his partner, diamond connoisseur and jeweller Robert Mouawad for $7 million. 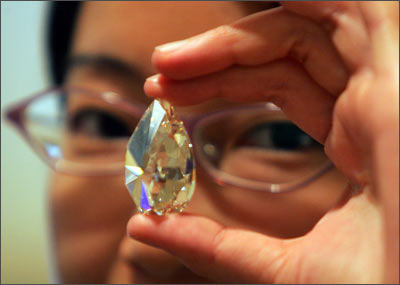 The diamond is the largest ever offered at an auction in Asia. 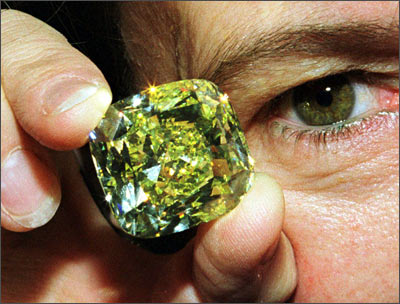 Named after its owner, French socialite Mouna Ayoub, the Mouna Diamond weighs 112.53 carats. It is said to be one of the largest fancy intense yellow diamonds in the world.

Mouna Ayoub is the jet-setting Lebanese former wife of Saudi businessman Nasser Al-Rachid and the Mouna Diamond was part of the collection called Mouna Al-Ayoub.

The cushion-shaped stone is 26 mm in diameter set in a baguette-cut mount pendant by Bulgari.

She got the diamond, and some of her other jewellery auctioned, to fund work on the Bernard Tapie Phocea, a boat she had bought. 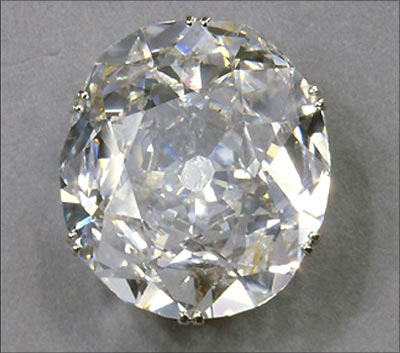 It's the most famous, and perhaps the oldest diamond in the world. Yes, we are talking of the magnificent Koh-i-noor, which now adorns the crown of the Queen of England.

The diamond belonged to the Delhi sultanate, then headed by Sultan Allaudin Khalji, in the late 13th or early 14th century.

It is believed however that, in the fifteenth century, the diamond belonged to Babur and was known as the Baburnama; it stayed with the Mughal dynasty until it was captured by Nadir Shah.

It was named the mountain of light (which is what Koh-i-noor means) by Nadir who took it from the Mughal Emperor Muhammad Shah after the capture of Delhi and Agra in 1739.

The Koh-i-noor originally weighed 186 carats but was cut to 108.93 carats when it became part of the British crown jewels. It was surrendered by its last owner, Emperor Ranjit Singh, to Queen Victoria in 1851.

The Koh-i-noor is said to bring misfortune or death to any man who wears or owns it; on the other hand, it bring good luck to any woman who does the same. 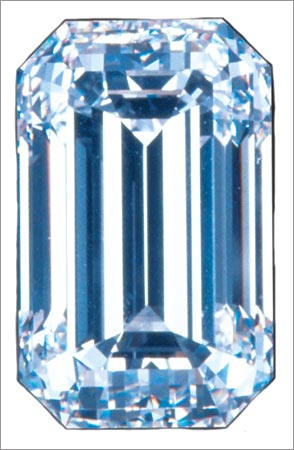 Weighing in at 108.81 carats, this diamond is named after famous Lebanese gem and jewellery dealer and diamond connoisseur, Robert Mouawad.

The diamond, which was discovered in 1991 -- the rough stone weighed 244.6 carats -- is a magnificent emerald cut and belongs to the 'purest of the pure' category.