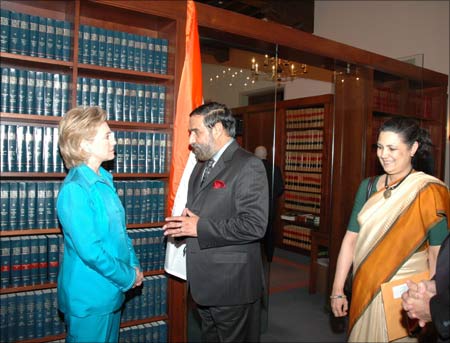 Commerce and Industry Minister Anand Sharma, the first Indian Cabinet minister to visit the United States after the 2009 election in India, has slammed the critics of outsourcing and said that India has invested more in the United States than then vice-versa, and created over 300,000 jobs in America.

At a press conference at the Willard Intercontinental Hotel in Washington after his meetings with US Trade Representative Ron Kirk and Commerce Secretary Gary Locke - whom he had also met on the sidelines of the 34th anniversary of the US-India Business Council along with Secretary of State Hillary Clinton, Sharma said, "When it comes to outsourcing, it is not the right thing to look at it negatively."

Stating that outsourcing generated more employment in America itself, Sharma pointed out that 'Indian foreign direct investment in the US is more than America's FDI in India.'

Sharma said, "When you look at the services sector, which is a major component of Indian exports, perhaps what is not fully appreciated is that our outflow of services is evenly matched by the inflow."

"About 100 Fortune 500 companies have their research and development hubs in India and 220 of them source their software from India. Don't forget India has a huge information technology industry, (so) where does the hardware come from?"

"That's why any protectionist barrier is dangerous," Sharma argued.

Sharma reiterated that this was why "any kind of protectionism will not only be counterproductive but also deepen the recession." He also said Indian investment globally had also been burgeoning over the past few years, and noted, "Globally, if you look at acquisitions and mergers in the last one decade, it is India who takes the lead."

Thus, Sharma said, with regard to outsourcing and the mere 24,000 to 30,000 maximum number of H-1 B visas provided to Indians was no match for the FDI brought into the US by Indian industry and said it is imperative "that things have to be put in the proper perspective and you in the media should help in communicating the correct picture, because sometimes we in politics, do not get it."

Earlier, Sharma bristled when a reporter asked if the fact that he was a Rajya Sabha member unlike his predecessor, made him less burdened to show more flexibility in the Doha Round of the World Trade Organization, which is currently comatose.

He immediately shot back, saying, "I think that's not a fair question at all."

When the reporter protested that he had not completed his question, Sharma said, "You made an observation. Now, let me counter that."

"For somebody who has been in public life for all of his adult life, I am rooted to Indian reality, sensitivity and national pride. No less, not more. It's not a question of individuals. A nation's policies are not determined by individuals, but yes by leadership of the country. Here, we have in Prime Minister, Dr Manmohan Singh, a leader who has the vision, comprehension, understanding of what the global situation is - where India's priorities are."

Sharma argued that India's statement that it is willing to engage and help resurrect the Doha Round and move it to a successful conclusion, "India has never said it should collapse. Yes, it had a logjam - that is part of history. Either we dissect that and keep on analysing or re-analysing or try to pick from where we had reached and move it forward." 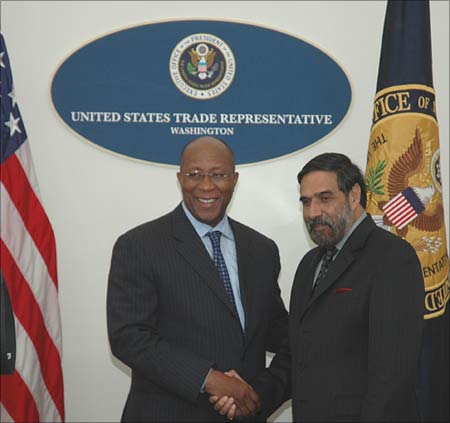 He said, "A practical and correct approach is not to let go waste what was invested over years, but to accept the progress, which is substantial."

Sharma said, "Flexibility has to be there in the first place. If you are inflexible, you cannot walk and sit on a negotiating table for a global treaty, particularly this one where three-fourths of the world was seeking correction for distortions, which were established and accepted.

Sharma asserted, "If you remain rooted and frozen in the pre-negotiating position, then no negotiation of global treaties is possible. What is the need of the hour is a rule-based multilateral trading regime which takes on board the developmental aspirations of the poor countries at the same time ensuring better access for all, and that's what we should be striving for."

He said, "My prime minister has a very clear commitment that this round being dedicated to development must be taken to its successful conclusion. That's the mandate which I have from my prime minister who feels that in the present economic crisis which the world is facing, this will be a positive message for global trade barriers to be broken down further and for global trade to move forward, which will help economies across the board."

Sharma said, he was sure "that President Obama wishes the same and that's the feeling I got from Ron Kirk."

The commerce minister was also in Capitol Hill along with Ambassador Meera Shankar and held meetings with the leadership of the subcommittee of trade of the House Ways and Means Committee.