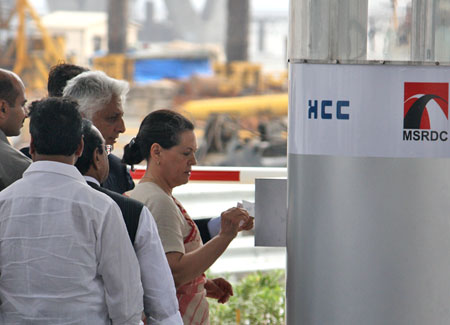 Hundreds, if not thousands, of Mumbai residents lined the streets of Bandra, a Western Mumbai suburb, hoping to catch a glimpse of India's most powerful politician.

She cut a ribbon in front of one of 16 toll booths on the Bandra side and was the first to slide a pass through the electronic sensor of the automated toll system, lifting the barricade so that she and her security detail could pass through.

They then drove the entire span of the sea link, all the way to Worli before turning around and driving back. 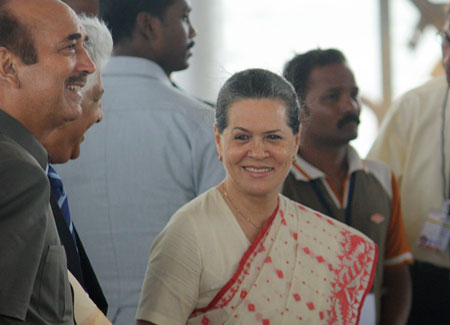 The Bandra-Worli Sea Link, originally scheduled to open in 2004 but pushed back because of delays, is India's first and longest open sea cable-stay bridge. It will open to the public on Tuesday, June 30, at 11 p.m., according to officials present at today's inauguration.

As part of a promotion plan, motorists will be able to use the sea link for free until July 5; after that, a fee system will be implemented, as follows:

'A monument worthy of Mumbai' 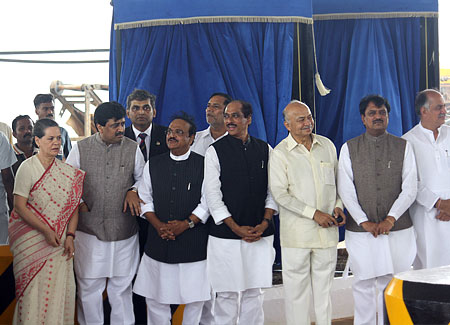 Construction of the Bandra-Worli Sea Link has been one of the most challenging infrastructure projects undertaken in recent times in India. Reflecting on the hard work of our engineers and over 3000 workers who have raised this sea link in rough open sea conditions, I am proud to say we have truly built a monument to human skills, enterprise and determination," Gulabchand said at the launch.

'The second carriage-way will open in December 2009' 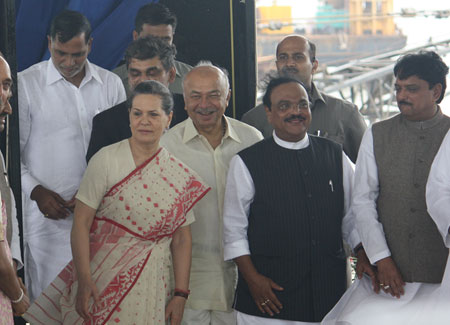 The highlight of the Bandra-Worli Sea Link are the two cable-stayed bridges - one a 500 metre span and the other a 150 metre span -- with the highest towers reaching a height of 126 metres, about the height of a 43-storied building.

The Bandra-Worli Sea Link is a pre-cast segmental box girder continuous bridge with twin carriage-ways of four lanes each. Immediately, one carriage-way will be opened to traffic with two-lane traffic in both directions. The second carriage-way is expected to open in December 2009.

Critics have said that traffic of Worli sea face will worsen considerably, if Mumbai's traffic police are unable to handle the heavy influx of vehicles. Yesterday, however, Mumbai Joint Commissioner of Police (Traffic) Sanjay Barve said that these rumours were unfounded, and that police were fully prepared.