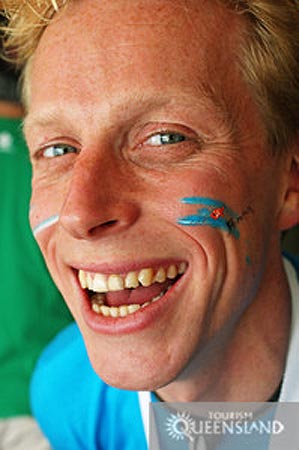 Image: Ben Southall is the winner!
Photographs: Tourism Queensland/Eddie Safarik/Handout
Ben Southall, a British charity worker has won the 'best job in the world'. He bags a $150,000 deal to work as caretaker of a tropical Australian island.

The 34-year-old beat over 34,000 applicants including an Indian RJ Anjaan to win this job.

According to Ben Southall, "The most important thing to me in life is to have an exciting job that makes me happy, put smiles on people's faces and achieves challenging goals!" 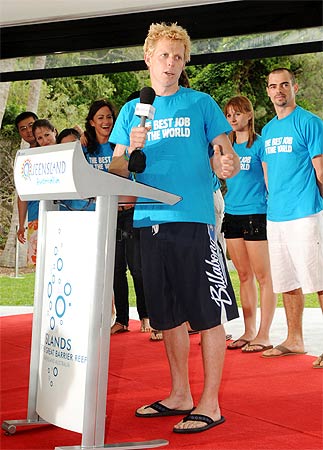 Image: Ben Southall
Photographs: Eddie Safarik//Tourism Queensland/Handout/Reuters
Ben has spent time in Africa working as a tour guide and driver and then returned to the UK to work as a charity events project manager. Ben loves adventure, keeps fit through running marathons and climbing.

Southall was selected by officials from the Queensland state tourism department. The finalists were asked to prove their blogging skills and take swimming tests.

Southall will need to post a weekly blog, keep photo diaries and create video updates to let the world know about the unique experiences available on the Islands of the Great Barrier Reef. 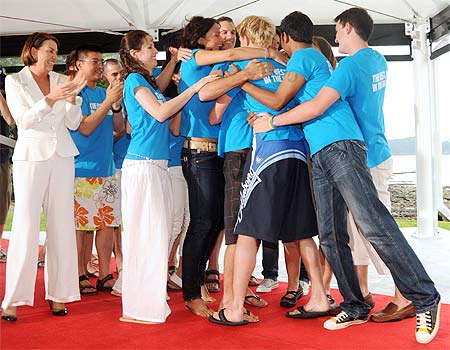 Image: Ben Southall (4th R) of Britain is mobbed by other contestants
Photographs: Eddie Safarik//Tourism Queensland/Handout/Reuters
Ben Southall's job will begin from July 1. He plans to live with his Canadian girlfriend in the three-bedroom sea-facing villa.

He will have to do interviews with the media. The contract involves spending six months on Hamilton Island, one of the Islands of the Great Barrier Reef.

The Island Caretaker will also travel to other islands and enjoy activities such as sailing, kayaking, snorkelling, diving, picnics, bushwalking and more.

Though a charity worker Southall is not laid back he enjoys bungee-jumping and Ostrich riding. 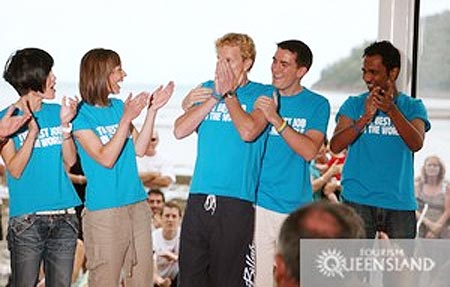 Image: Ben Southall with the finalists
Photographs: Tourism Queensland/Eddie Safarik/Handout
The job seekers raced to grab the so called 'Best job of the world' across the globe after its first advertisement appeared in the international newspapers and online on January 12.

The campaign attracted immense publicity globally and generated thousands of news stories in newspapers, on television, radio and the internet.

You couldn't get a decent mainstream national campaign for that amount of money, let alone a global one," Nancy Hartley, creative director of Brisbane agency CumminsNitro, which developed the project for Tourism Queensland, was quoted saying in a media report. 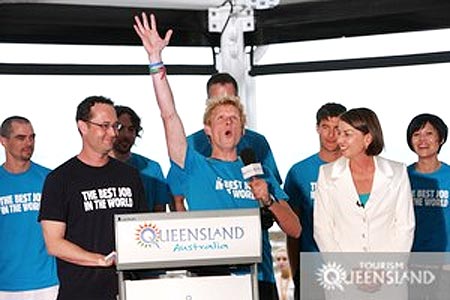 Image: Ben Southall is ecstatic after being announced the winner
Photographs: Tourism Queensland/Eddie Safarik/Handout
"Early on, we joked about being able to do a global campaign on a classifieds budget - well that's pretty much what happened. The fact that this was being picked up and run as news on CNN and BBC World - you just can't buy that sort of publicity" she said.

Tourism Queensland admitted it has kicked in an extra "two or three-hundred thousand" for media management since applications closed in January, but estimates put the value of the return at about $110 million.

That figure is expected to grow by a further $30 million dollars by weeks' end, when the island caretaker position will no longer be vacant.
More