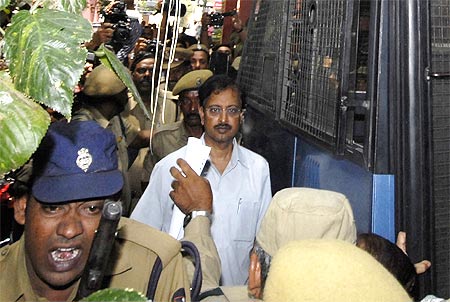 Image: Ramalinga Raju, founder and former chairman of fraud-hit Satyam Computers, is escorted from a court in Hyderabad on April 9, 2009.
Photographs: Krishnendu Halder/Reuters

The Securities and Exchange Board of India chairman C B Bhave said punishment should be quick for the perpetrators of fraud at IT firm Satyam Computer.

Bhave said that the Satyam issue had been tackled well by the Indian agencies, adding that they were still looking at the lacunae.

He said that if the fault was well within the system, then it would be definitely rectified. But if it was due to a particular individual, then the person should be brought to book.

Bhave said that four or five months' time was not sufficient to book somebody given the nature of our legal system.

"However it should not take 15 years also", he said. Satyam founder B Ramalinga Raju had been put behind the bars for confessing committing the fraud in the IT services major which shook India Inc.

Bhave said that the three checks, internal audit, statutory audit and endorsement of the audit panel where independent directors were the majority, had failed in the case of Satyam. Now it required to be seen whether more checks were required, he said. A city court in Hyderabad has adjourned to June 1 the hearing on a petition filed by the Enforcement Directorate seeking permission to record statements of Satyam's former Chairman B Ramalinga Raju and other accused in the Rs 7,800-crore financial fraud in the IT company.

The XIV Additional Chief Metropolitan Magistrate posted the matter for further hearing on June 1 after the case came up before him on Thursday.

The court also postponed hearing on a CBI plea, seeking its permission to conduct lie detector and brain mapping tests on Raju brothers and other accused, to June 1.

The judge postponed hearing on the ED's plea and CBI's application after the defence counsels informed him that one of their senior lawyers handling the case on behalf of the Satyam accused had been hospitalised and requested for providing more time.

On April 6, ED had filed an application seeking the court's permission to interrogate Ramalinga Raju, his brother and Satyam's former MD Rama Raju, former CFO Vadlamani Srinivas and former auditors of Price Waterhouse S Gopalakrishnan and Talluri Srinivas in jail, under the provisions of the Prevention of Money Laundering Act.

The directorate wanted to examine the accused to know how the money was generated from the Satyam fraud and how it was routed.  CBI, which is probing the Satyam scam, had filed a petition on March 24 seeking courts permission to conduct forensic tests on Raju brothers and Vadlamani Srinivas, saying that the accused did not fully share information about the fudging of the company's account books. 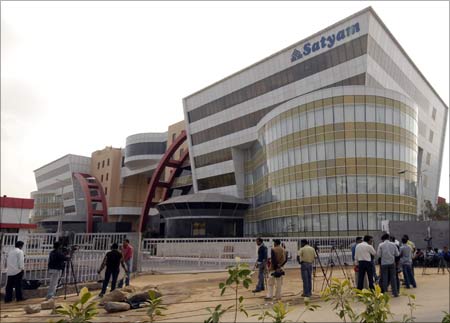 The six board members of the fraud-hit Satyam Computer Services met Prime Minister Manmohan Singh and Planning Commission deputy chairman Montek Singh Ahluwalia on Thursday and apprised them about the steps taken to revive the IT company.

"The government has been very very helpful and positive. . .it was a good day, we were all in town (and) so we just came to say thank you because we have reached a stage", company's chairman Kiran Karnik told PTI after meeting Ahluwalia.

The meetings with Singh and Ahluwalia have taken place just two days before the announcement of the results of the general elections for the 15th Lok Sabha.

Following Satyam founder B Ramalinga Raju's disclosure of the accounting fraud in January, the government disbanded the then board of the company and appointed six nominees, including chairman Karnik, to run the company.

Satyam is in the process of being taken over by Tech Mahindra, which emerged as the highest bidder in the auction to acquire the IT company.

Asked on how long the government nominees would continue on the board of Satyam, Karnik said, "It is up to Tech Mahindra to decide...They are the new owners." Image: The Satyam Campus in Hyderabad
Photographs: Rediff Archives
As regards the government-appointed board, he said, "We have finished our task and now we should move out ...We were appointed by the government to do a certain job. The company has now done well...it survived. It got a new owner. We should be out of it."

While paving the way for the takeover of Satyam by Tech Mahindra, the Company Law Board allowed the new owners to appoint four representatives on the board of the company.

On the strategy of the company to deal with class suits in the US and a similar one being tried here, Karnik said, "It is up to Tech Mahindra (to deal with them). They are not too worrisome. I think they can be handled."

The case, however, was not entertained by the Commission on the grounds that it did not have adequate infrastructure to deal with such suits. MTIA is reportedly planning to move higher court. 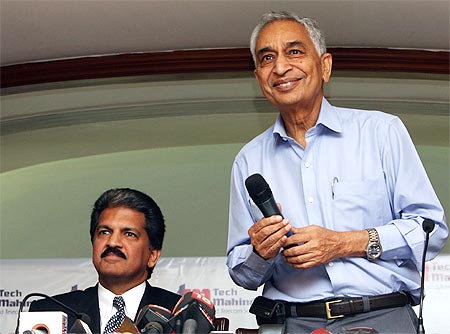 Satyam Computer Services is awaiting the nod of US authorities for inducting four representatives of Tech Mahindra on the IT company's board.

"From Indian context it is all clear....once the US approval comes, their (Tech Mahindra's) representative will be inducted into the board very soon", Satyam board member and ICAI's past president T M Manoharan told PTI when asked as to when representatives of new owners would join the board.

Paving the way for takeover of crisis-ridden Satyam by Tech Mahindra, the Company Law Board allowed the new owners to appoint Vineet Nayyar, C P Gurnani, Sanjay Kalra and Ulhas N Yargon on the board.

Manoharan, who is in the capital along with other board members to meet Prime Minister Manmohan Singh and Planning Commission deputy chairman Montek Singh Ahluwalia, said, "Many approvals have come... Satyam shares are listed across the globe in many stock exchanges...US approval is awaited."

Asked whether the statutory approval from Germany has been received, Mahoharan said, "I think all that has come. All others have come except US. This will happen by anytime."

Tech Mahindra, in its announcement of open offer to buy shares of Satyam, pointed out that approvals from the anti-trust authorities in the US and Germany are needed for completing acquisition of Satyam.

While superseding the board of Satyam, the Company Law Board (CLB) allowed the government to appoint ten nominees on the board of the IT company.

Having won the bid to take over Satyam, Tech Mahindra is in the process of acquiring 51 per cent stake in the IT company.