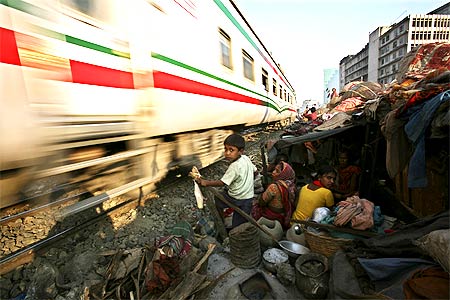 Image: A family takes shelter in their home next to a railway track as a train zips by.
Photographs: Andrew Biraj/Reuters

Travelling at a speed of 300 km per hour on the Mumbai-Pune-Nagpur route may not be a distant dream for train commuters as a pre-feasibility report submitted to Maharashtra Chief Minister Ashok Chavan has said it is a viable proposition.

"The report, prepared by a German company, suggests that it is viable to run the high-speed train on the 900-km long route," a senior official from Planning Department told PTI.

When the train service is launched, it would mean that the commuters can reach Pune from Mumbai in an hour and Nagpur in three hours. 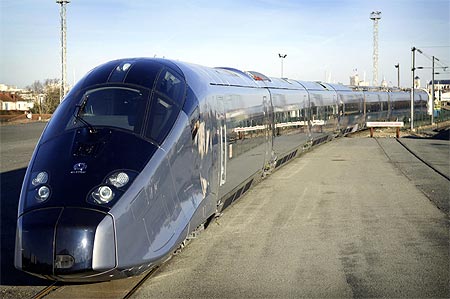 Vossing, the company that was working on the report since last year, has submitted it to the chief minister for approval, the official said.

The report said the short routes earlier proposed for the train, like those linking the proposed greenfield airport near Panvel to Khopoli (30 km), Alibaug (60 km) and Santacruz airport (45 km) and also route between Santacruz airport to Nariman Point (18 km), Goregaon (15 km) and Kalyan (50 km) were not viable.

The distance between these routes is less and it will not be feasible for high-speed trains to stop at such short distances, the report said. 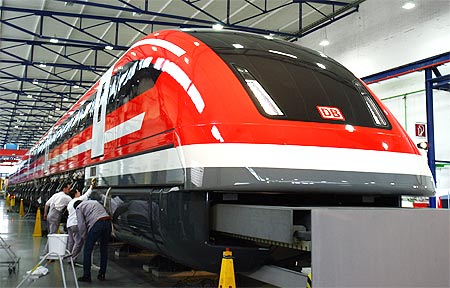 Besides, there are options like Metro rail and Monorail available for commuters on these short-distance routes, the official said.

The fare of the proposed trains would be "more than the current train tickets but less than air fare," he said. Finance Minister Jayant Patil floated the idea of high-speed trains on the Mumbai-Nagpur route and the state Cabinet approved the project last year.

The corridor was being planned as the government has undertaken the development of the multi-cargo hub Mihan at Nagpur, the official said.

Initially, the State government had suggested model of Maglev (magnetic levitation) as an option on the route, but the proposal was scrapped considering its high cost, the official said.