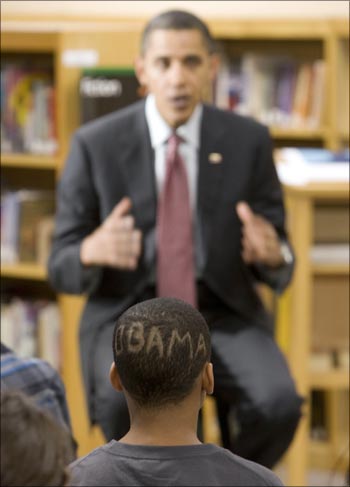 Obama said America's prosperity has long rested on how well its children are educated.

"In the 21st century, when countries that out-educate us today will out-compete us tomorrow, there is nothing that will determine the quality of our future as a nation and the lives our children will lead more than the kind of education that we provide them. Nothing is more important," he said.

He was speaking after announcing the $4 billion federal educational aid 'Race to Top' programme for students at a middle school in Madison, Wisconsin.

"I'm pleased to report that 48 states are now working to develop internationally competitive standards because these young people are going to be growing up in a global environment where they're competing not just against kids in Chicago or Los Angeles for jobs, but they're competing against folks in Beijing and Bangalore," Obama said. 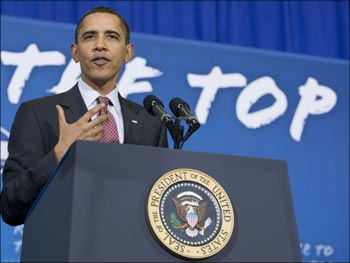 Without naming any country, Obama said the US, which had always led the way in innovation, is now being outpaced in math and science education.

"We used to rank number one in the number of college graduates and advanced degrees. That's not the case anymore," Obama said.

Obama urged States to raise their bar and upgrade their education to meet the international standards.

"I also challenge States to align their assessments with high standards -- because we should not just raise the bar, we should prepare our kids to meet it. There's no point in having really high standards but we're not doing what it takes to meet those standards," he said.

Emphasising on parent's role in this great effort, Obama said lifting up American education is not a task for government alone.

© Copyright 2022 PTI. All rights reserved. Republication or redistribution of PTI content, including by framing or similar means, is expressly prohibited without the prior written consent.
Print this
article
ALSO
READ
MOST
RECENT