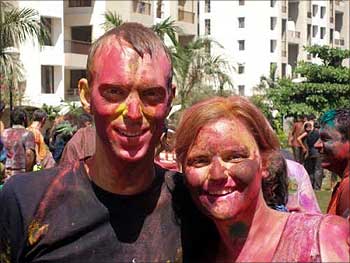 Canada is the world's best country for expats while United Kingdown is among the worst. India is ranked at the 25th position. Over half of all expats moving to India (60 per cent) noted a worsening of their working hours created deterioration in the quality of their family life.

"Locations where salaries may not be as high, such as Canada and Australia, are where expats are really enjoying not only an increased quality of life but are also finding it easy to fit in to their new communities," says a HSBC Bank International survey.

High salary doesn't always mean a high quality of life. Half of expats claim that the length of their employment contract (51 per cent) or career prospects (44 per cent) are the main reasons for staying in their country of residence.

For most expats, the biggest advantages of taking an expatriate posting are the financial benefits, such as tax breaks and the ability to save. Expats enjoy a better life in Germany, France and Thailand. 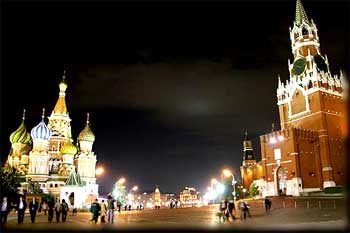 Asia is home to among the highest paid expats in the world; while their poorer counterparts can be found in Australia and Western Europe.

The lowest-paid expats live in Australia and Belgium, with the majority (63 per cent and 61per cent versus 35per cent overall) of expats earning under $100,000.

As well as commanding high salaries, expats in Asia further recession-proof themselves by scaling back on the luxuries. Expats in Japan (ranking first, 54per cent), Thailand (second, 51per cent) and Hong Kong (third, 49 per cent) scale down their spending on luxury items, such as holidays and leisure activities.

Here's a look at the world's 10 best nations for expats... 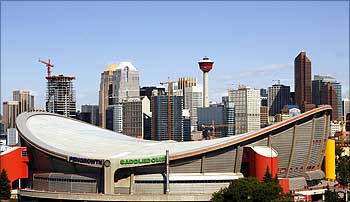 Image: The Pengrowth Saddledome stands as one of the icons of the Calgary, Alberta skyline.
Photographs: Todd Korol/Reuters

Canada has a high proportion of retired expats and a relatively older expat community, with 61per cent aged 45 and over. In addition, over two thirds own a property there, over double the global average (31per cent), and almost half own more than one car, far above the global average (29 per cent).

About 53 per cent of expats in Canada have noticed an improvement in the quality of their family life there, compared with under a third globally who can say the same.

Canada also ranks the best of all the countries surveyed on accommodation for expats, with over two-thirds (68 per cent) saying that it was easy to find a place to live.

Expats in Canada also point out that the quality of their accommodation is better there than in their home country, the best figure of all the countries surveyed. Getting utilities arranged in their new home was also no problem for most expats in Canada, with over three-quarters (76 per cent) finding it easy, compared with an average worldwide of under half (47 per cent). 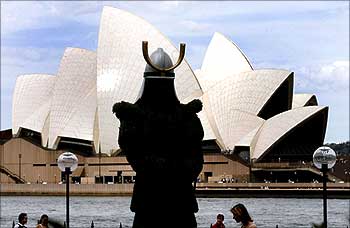 Image: A sculpture of a samurai warrior at the Museum of Contemporary Art in Sydney.
Photographs: Daniel Munoz/Reuters

Australia is among the top five countries in terms of quality of accommodation, entertainment and family life. About 83 per cent mention that the weather is one of the best reasons for living in Australia. Expats named the general environment and quality of life for their children for preferring to live in Australia.

About 91 per cent of respondents said their lifestyle was the reason for staying in Australia. Almost half (48 per cent) of expats living in Australia reported that the quality of their family life has increased. Australia is also classed one of the best places for ease of integration for expats, second only to Canada.

It is considered the easiest place for expats to organise their finances, but only ranks mid-table in terms of ease of finding somewhere to live (eleventh) and making friends (tenth). However, in terms of making local friends, Australia scores quite highly, placing sixth. Living in Australia also allows expats to make purchases that they may not be able to do elsewhere.

Over half of Australia-based expats claimed to own a property compared with one-third of expats globally. However, less than one-tenth of expats in Australia employed household staff, a much lower percentage compared with the global average of 48 per cent. 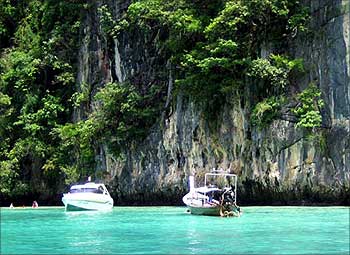 Expats also revealed that personal wealth and salary was, on average, much lower in Thailand than anywhere else around the world, but a significantly improved lifestyle was what kept them from leaving. Entertainment, food quality, accommodation, social life and health and well-being all rated significantly higher than the worldwide averages.

One in four expats in Thailand also say that they have their own swimming pool and almost half (49 per cent) own their own home compared with just 31 per cent worldwide. 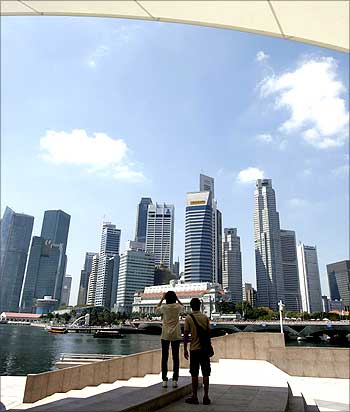 Singapore ranked highly in terms of quality of life (fifth overall) and was among the top six countries in terms of the quality of utilities, entertainment and healthcare.

Over half of respondents (51 per cent) also said that the quality of their accommodation had increased from their country of origin.

Its infrastructure is well regarded, with two-thirds (64 per cent) of expats living in Singapore reporting an increase in the ease of their commute to work, compared with 44 per cent globally; while roughly three-quarters said travelling was better, claiming a rise in general transport quality.

However, expats in Singapore did not prioritise socialising with local people and it came 24th out of 26th for expats choosing to join a community group and 18th in terms of the ease of making local friends 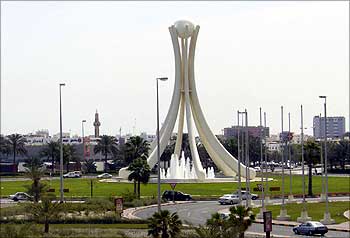 Bahrain and Netherlands offered its expat residents the greatest improvement in working hours, followed by Germany. 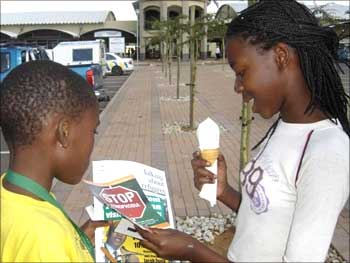 Expats based in South Africa feel that they have the greatest improvement in pursuing their hobbies, followed by Canada.

The top three countries for settling down are South Africa, Thailand and Canada, where 55 per cent, 53 per cent and 52 per cent of expats respectively have lived there for more than five years. 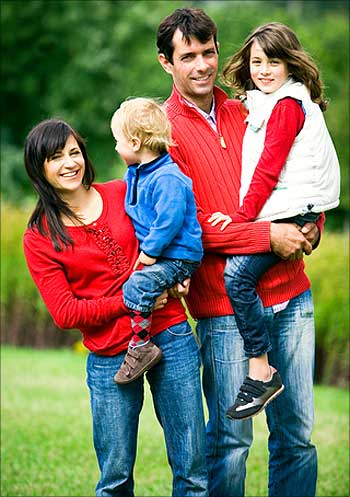 France is in the top three countries where expats report the greatest increase in quality of life (with the other two countries being Germany (1st) and Thailand (3rd).

France offers expats the highest quality healthcare, followed by neighbouring Belgium and Switzerland. However, over one-third of expats in France reported that they found organising their finances quite difficult. 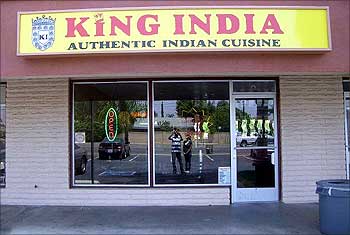 Image: Expats in the US were also more likely to own more than one property.

Expats living in the US reported that, in comparison to their home country, the quality of household products, accommodation and clothing had increased.

In comparison to other regions, expats in the US were also more likely to own more than one property and more than one car (53 per cent in the US compared with 29 per cent on average). Of the top 26 countries, the US was tenth in terms of the ease of integration.

It ranked fourth in terms of expats joining local community groups and was the seventh best country to make local friends. Nonetheless, expats also reported that setting up their healthcare was particularly difficult. Of all the countries, the US ranked 24th for this provision.

Organising one's finances was also seen as a challenge the United States ranked 20th out of 26 in this regard. 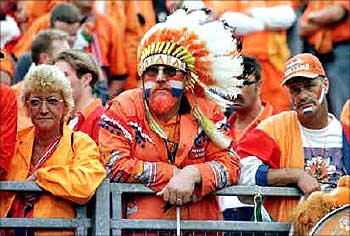 9. Spain Spain ranks as the second best country for expats in Europe. It ranks high on education and childcare. Spain is also among the most friendly places for expats to live. 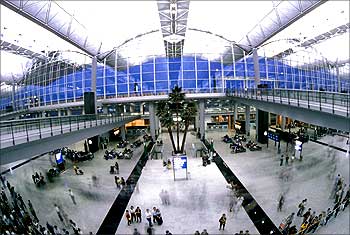 10. Hong Kong Hong Kong ranked third in terms of making friends and fourth when looking at the quality of social life and entertainment. It ranks seventh overall for ease of integration, with expats in Hong Kong making the greatest effort to fit in socially - particularly within the expat community.

Expats in Hong Kong also enjoy a number of other benefits. Like Singapore, expats in the country find the commute to work much easier and they have also noticed an improvement in transport generally.

Over one-third found organising their finances very easy. Similarly, setting up utilities posed no challenges to 45 per cent of Hong Kong expats (compared with 20 per cent overall). However, the country ranked second to last in terms of quality of accommodation and working hours which could also explain its lower rank in terms of the quality of family life (22nd).