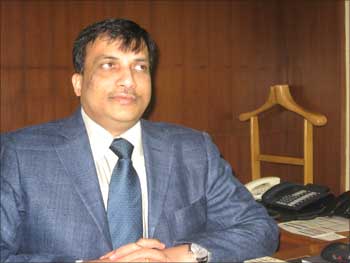 A consortium led by Vavasi Telegence is all set to buy a substantial portion in Zain, a Kuwait-based telecom company, with operations in 22 countries.

We read the news and reacted the same way -- Vavasi? who?

Vavasi is the dream child of Farid Arifuddin, a businessman from Karnataka. With less than Rs 150 crore (Rs 1.5 billion) of paid up capital in his company, Arifuddin's consortium roped in public sector telecom giants Mahanagar Telecom Nigam Ltd and Bharat Sanchar Nigam Ltd to stake a claim to at least 46% of Zain.

Zain's largest shareholders are the Kuwait Investment Authority, a sovereign wealth fund which holds a 24.6% stake, and the Kharafi Group who holds around 10.85%.

Arifuddin, who is said to have links with many members of the ruling Congress party, Telecommunications Minister A Raja of the Dravida Munnetra Kazhagam, BSNL and MTNL has successfully convinced Malaysian billionaire Syed Mokhtar al-Bukhary and some Indian private equity funds to invest in the deal.

Will Arifuddin accomplish what giants like India's Reliance Communications, French firm Vivendi, the United Arab Emirates's Etisalat (all tried and failed to buy Zain's pie), and Bharati (its botched MTN deal) failed to do?

After some dilly-dallying, both BSNL and MTNL say they are now ready to join the Vavasi-led consortium. They will bring to the table balance-sheets with mammoth cash reserves, which is what observers say Vavasi -- which itself does not have much revenue -- is angling for.

The deal raises much speculation about Arifuddin's money and clout. Who is backing him? What is his relationship with politicians? Is he merely a front man for big players in telecom?

In an exclusive interview with rediff.com's Sheela Bhatt and Krishnakumar P, maverick businessman Arifuddin speaks about his business, plans and politics.

'In the next 20 years, India's business order will mature' 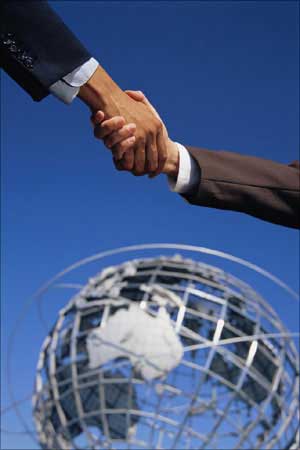 What is your take on politics and business being mixed up in India?

It varies from country to country, culture to culture. Ultimately in every social order, there is some kind of correlation. If you say it is seamless I would not agree.

How is it in India?

In India, it is in an evolutionary mode. Probably in the next 20 years, India's business order would mature. Currently some of the basic fundamental equations are coming under scrutiny and a stress test.

In India politics and business are mixed up. We are talking about the United Progressive Alliance....

We do not have any political support.

Please shed some light on your background.

I am from Karnataka. My father is a retired chief engineer of the state electricity board.

Was your family well-off?

You could say that, technically. I did enjoy certain privileges.

I did my schooling at different places. Since my father around that time held a district level posting, I went to English medium schools. I also have a brother and two sisters.

When they (his brother and sisters) were school-going children, my father was in a junior posting, so they had to go to Kannada medium schools.

I did my engineering from two different colleges. I had to because I was active in student politics.

Why did you become an engineer?

I think I always knew what I wanted to be right from the beginning. I went to an engineering college not to become an engineer, but to learn.

But politics was not big in professional colleges.

True. But I was active anyway. I came to Delhi in 1987, after I finished my engineering.

What did you come to Delhi?

I did not look for a job. That's for sure. I was just here for four, five years.

Why not a job? Were you ashamed of taking up a job?

Why should I be ashamed of doing a job? It was a period of learning for me.

What were you learning?

I was learning about everything -- from people to politics to economics.

'Rao was a smart politician. I thought it was better to leave' 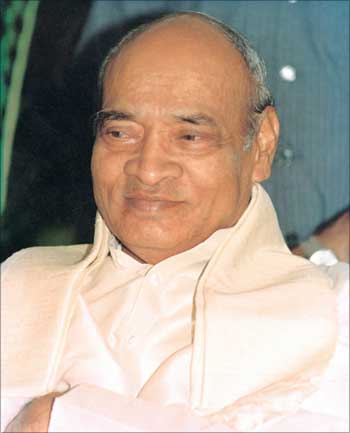 You must have been in the Congress.

Yes. I was in the Congress. Rajiv Gandhi was putting together a team, and I was part of it.

Were you in the Department of Telecommunication?

I was not in DoT. I was a national office-bearer. (Current Union Minister for Highways) Kamal Nath was my senior. I was absolutely clear about what I wanted to do and how I wanted to do it.

What was your vision about what you wanted to do?

(P V) Narasimha Rao became prime minister and many people were not wanted in the hierarchy of the party. Some wanted to wait and watch. But I decided to move on. Many of my contemporaries too did the same.

Among those who stayed back, very few achieved anything substantial in life. Rao was a smart politician. I thought it was better to leave.

Soon, I left India, and spent some time in the UK and US.

When did you earn your first million?

I have still not earned it!

However, along with a couple of friends, I hold patents for a few money spinners. We are extremely focused and deal in two types of businesses -- telecom and silicon.

In telecom we own the next generation access technology. Many of your readers may not understand the exact implications, but what we own is actually a lot of money. We also have other Intellectual Property Rights.

I myself hold several patents including the one for reactors used to manufacture silicon. We have also filed patents for some access devices and other systems that we have designed.

We have also developed a heat removal system for data centres. Let me explain this to you.

'Change is the only constant in life' 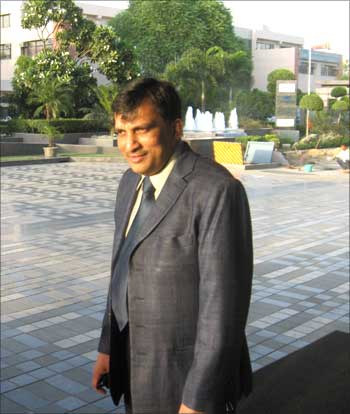 When and where did you work on these things?

But you needed to have started somewhere to get to this position.

That is your hypothesis. It is not true.

How did you grow?

Where have I grown?

From being a Congressman how did you get into the world of business?

During 1996-1997, I was in the oil and gas business. I was sitting on the LNG terminal in Gopalpur. When Reliance found gas, we exited.

Then, I ventured into a couple of other things -- none of which are of any consequence.

Then we entered the telecom arena. Basically we were looking at it from a technology perspective. The world moved from the analogous to the digital system; from the voice to the mobile system.

In mobile telephony we thought something is missing somewhere. We started working on the missing link.

We were working on Synchronised CDMA technology, and it took us a long time to get it tested. It also involved a lot of money, patience and perseverance.

We then acquired a small telecom network in Mongolia. We did a trial in India. It took us three years to perfect the technology. That band was open. The commercialisation, however, is pending with the telecom regulator, TRAI. It has to take a decision with regard to pricing.

We were simultaneously working on silicon. At that time, all this emphasis on clean energy was not there. (Then US President George W) Bush was there, and he was driving up the price of oil. We just believed that it (silicon) is the only way forward.

I am just giving you an anecdote. A senior Saudi minister invited us and asked one reason why he should do business with us.

Some 20 years back the wealth of your economy was determined on the basis of three, four parameters. How much of oil can you find? How much can you sell? What price can you sell it at? When will the price crash?

Today, the world really doesn't care about these parameters. Today the world cares how much of carbon dioxide the global environment can take. Change is the only constant in life.

'How the deal fructified is a secret between Zain and me' 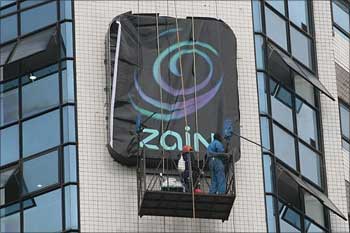 What is the paid up capital of your company?

We have two companies. NGTL India and Vavasi Telegence with Rs 150 crores to Rs 200 crores (Rs 1.5 billion to Rs 2 billion) of capitalisation.

Any plan to go public?

Those are all incidental issues. You should not count them as plans.

Who are the promoters of your company?

I have friends and well-wishers -- people who have faith in what we did.

Do you have any connection with Sam Pitroda? What is the connection of your company with former President A P J Abdul Kalam?

Sam Pitroda is not directly or indirectly associated in any way. Neither is Kalam.

Have you met them?

Why should I not meet them?

Are they advising you?

I know so many people. I have learnt a lot from them. I may have also contributed in an insignificant way. Here, you can't say people are advising...

Don't you think many changes are happening in India's business arena? How can a little-known company like yours bag such a big deal? MTNL and BSNL certainly could have found a better name or brand.

Do you mean I bribed someone?

Let me be very frank, clear and straight forward. I can show -- not now, of course -- it will be a little impolite -- that MTNL and BSNL took the decision. If they had not taken a positive decision, I still would have gone through with the deal.

I am a small company, and I have absolutely no compunctions about it. I am not seeking favours from anyone. I have aspirations to grow which in my view is not a bad thing. I may grow, again I may not... but to not make an effort is a bad thing.

Zain is not the only company in the world, there are at least 15 others.

I did not stop anybody from approaching Zain. I entered into a deal with them. How the deal fructified is a little secret between them and me.

'Why should I do business with Raja's family?' 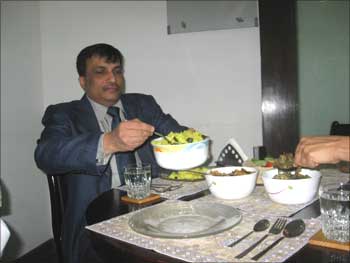 What is this deal all about?

Everything will be reveled in a public announcement.

What we achieve in life comes under scrutiny. You could always associate some motive or the other. If you are saying I got this because of my political background, then it is wrong.

There may be a few thousand people like me. You could attribute any reason for my achievements. But, I think ultimately, whatever a person achieves it is because of hard work.

How did you meet the Zain management?

If I were to share all that, it would not be appropriate.

What do you get from the deal?

Let us not get into that.

Who approached whom? How did the BSNL-MTNL-Vavasi collaboration happen?

Business doesn't happen like this. Business is not done because someone approached someone. Do they want you or otherwise? Business is done only for the sake of business.

Is Telecommunications Minister A Raja involved with you in any manner? Does he or his family have any interest in this deal?

You are asking me an absolutely ridiculous question. It is an insult.

As telecom minister, if he feels there is merit in my proposal, let him clear it.

If this deal materialises, what will be its business impact?

You have been in Delhi for 20 years, so you will be here for at least 10 more years. Time will speak for it. It won't be appropriate for me to say anything.

How will it benefit the country?

There would be significant benefits. The country will gain $20 billion to $25 billion out of this project. Now it is for them to decide whether they want it or don't want it. I think there cannot be a greater disservice (in opposing the deal).

Do you think your competitors can play spoilsport?

On a scale of ten what is the possibility of this deal going through?

Do you have political support in Kuwait?

I have political support all over the world.

When will this deal come through? Are you going to be celebrating Diwali or Christmas?

Definitely not Diwali... but soon after that.