India's longest flyover with a length of 11.66 km was dedicated to the nation by Andhra Pradesh Chief Minister K Rosaiah amid controversy over its naming after former Prime Minister P V Narasimha Rao with a Congress ally and powerful political group Majlis-e-Ittehadul Muslimeen boycotting the inaugural function.

Holding Rao responsible for the demolition of Babri Masjid in Ayodhya during his prime ministership, the MIM demanded that it should be named after Y S Rajasekhara Reddy, the man behind the project.

With thousands of Congress party worker thronging the venue of the inauguration near Sarojini Devi Eye Hospital in Mehdipatnam area, the starting point of the flyover, confusion and chaos prevailed as Rosaiah unveiled the plaque marking the opening of the PVNR Elevated Express linking one of the busiest areas of Hyderabad to the National Highway No 7, making it easy for the International Airport bound passengers to travel.

The flyover was built over a period of about three years at a cost of Rs 600 crore (Rs 6 billion), using the latest technology of prefabricated segment and overhead grid launcher, causing minimal disruption to the traffic along the route. 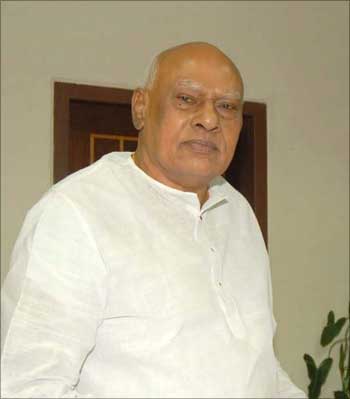 Chief Minister K Rosaiah hailed the construction of the flyover, believed to be longest in South Asia, as a major achievement which will go a long way in decongesting traffic on the busy route between the city and the international airport at Shamshabad. "The flyover was a dream of late Chief Minister YS Rajasekhara Reddy and it has been fulfilled today," he said.

The elevated expressway is expected to reduce the journey time between the city and the airport by half. "Earlier passing through this busy area would have taken half an hour but with the flyover, the 11.6 kms long journey will be over in less than 10 minutes," said Jawahar Reddy, commissioner, Hyderabad Metropolitan Development Authority.

"The world class fly over matches the world class airport reflecting the high class infrastructure development in Hyderabad:, said Vivek Deshmukh, chief engineer of HMDA. He pointed out that apart from the 17.2 meter wide four lane express way, the project also include a 62 meter wide under pass at Aramghar junction, the culminating point of the flyover to ensure uninterrupted flow of the traffic on to Hyderabad-Bangalore NH 7 and a Trumpet Junction at the entry and exit point of the Airport.

"This will make the journey for the internatioal and domestic passenger in and out of the airport a pleasure and will not waste any of their time," Deshmukh said. 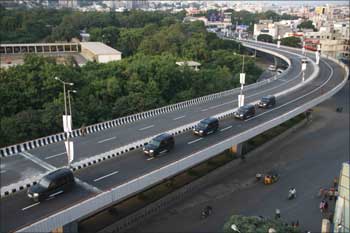 Image: The CM's covey after the inauguration.
Photographs: Snaps India

The flyover has 328 piers built over the median of the Inner Ring Road and 3500 block segments built using the pre-cast technology off site and brought to the site using heavy cranes and erected using the overhead launcher.

"This is the first time that this technology has been used in India for building a fly over and now other cities have also started using it," Deshmukh said.

The other long flyovers in the country are the ones at Panipat (10-km long) and Bangalore (less than 9 kms long).

At present a user, who gets on to the flyover, will have to cover the entire stretch of 11.6 kms because the ramps allowing it to exit midway are not ready. "The work is on the three intermediate ramps and they will take some more time."

To ensure a minimum speed of 60 kms per hour, authorities have decided to allow only cars and buses to use the flyoer. "Two wheelers, three wheelers and commercial carriers will not be allowed on to it to prevent accidents," said the municipal administration minister A Narayan Reddy. There will be no toll gate charges at present, he added.

Meanwhile several auto rickshaw unions held demonstrations against the decision of not allowing the three wheelers to the flyover. "This is an attempt to promote taxi services at the cost of auto rickshaws," said Amanullah Khan, an autorickshaw union leader.