Men in Delhi! Swati Piramal, Assocham's first lady-President in 93 years laughs as she the recounts the questions she's faced - and not at the first press conference she's just addressed in her new role - on her decision to choose 100 women to head an equal number of the chamber of commerce's sub-committees, on finance, on heritage, on R&D, design, animation...Aren't men good enough, she chuckles, was the most common question.

A perfect beginning, you'd think, to be able to launch into her particular brand of affirmative action.

But isn't it true, I ask with that particular brand of grace only a journalist and a male chauvinist at that can bring to bear, that you're all here, okay mostly, because you're someone's wife, someone's daughter, someone's mother?

Piramal doesn't flinch, just rattles off some names from her A-list - Renuka Ramnath, Kalpana Morparia, Kiran Mazumdar Shaw, Ranjana Kumar, Juhi Chawla, Durga Jasraj, Naina Lal Kidwai which one of these women, she seems to ask, isn't there in her own right?

I tick off a few daughters/nieces/wives, but Piramal counters with their work, the positives. "I don't know if that's strictly true", she says of one individual, sipping the Darjeeling tea she's just been served at the Belvedere in The Oberoi. 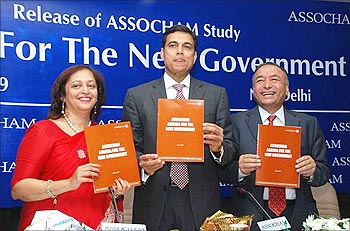 We're having a combination of Lunch and Tea with BS - Piramal's eaten at the press conference, I haven't. The salmon I'm having, somehow, looks a lot less appetising, my edge of superiority considerably blunted, and Piramal's just getting warmed up.

In Paris - Piramal got the Chevalier de l'Ordre National du Merite in 2006 - she says half-seriously, even a croissant is considered heritage, "here we have so much heritage but don't even care about it".

Piramal cites a Newsweek report on how sales of traditional sarees are plummeting - "I asked a sample of women in Mumbai, our generation, if they knew what the motifs in a Paithan saree were and they didn't know!"

So she's asked interior designer Raseel Gujral to be the co-chair of Assocham's Crafts and Heritage Committee. But isn't she just there because she's painter Satish Gujral's daughter, and I rattle off some other names (men!) I think would be more suitable.

Maybe they'd be good, Piramal says quietly but firmly, but I've seen Raseel's work and she's good - "all the women I've chosen are people whose work I'm familiar with".

We close the topic, both of us have our minds made up.But how will these committees be different from those in other talk shops like Ficci and CII, I ask, the salmon suddenly looking just that much pinker, the asparagus greener. 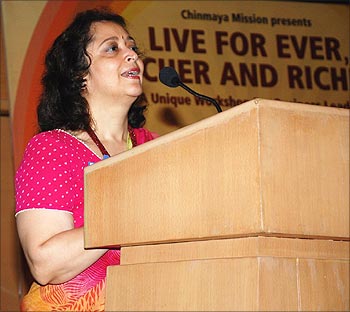 Piramal doesn't get into comparisons, but points out that she'll work on two fronts. One, Assocham will keep producing reports on market potential in collaboration with consultants like McKinsey - she insists the reports are top class and says a French firm called her up to collaborate with the Piramal group after an Assocham report talked of the size of the beauty business.

Two, her committee chairwomen will discuss ideas - so the lady in charge of animation, for instance, will talk of how we need to change the curriculum at schools if India is to emerge as a leader in the field.

The R&D committee, which Piramal chairs, she says could throw up new ideas for research - did you know, and I note the numbers down carefully, that when you purify 10,000 litres of water using reverse osmosis, you get just 3,000 litres of pure water?

The rest is pure solid waste. What you do with it has to be an important component of R&D, Piramal explains. Just as quickly, she cites a Californian experiment of solar grids (she promises to send the presentation she's just made to the media - most, by the way, report only on her views on interest rates the next day!) and says her energy committee will look at new ideas in this space... 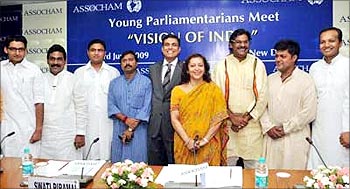 Image: Swati Piramal, a winner all the way.

What of Piramal herself? We know she's a scientist and has won many awards, and has been nominated a member of the Board of the Council of Scientific and Industrial Research - she's even written a book on the Bhagwad Gita and management, as well a dance opera telling the stories of ancient Indian science through dance.

But isn't it true that it is husband Ajay that runs Piramal Healthcare? Once again, Piramal doesn't contradict anything, but gently sketches the collaborative nature of the work.

After having practised medicine for a decade and having done a Masters in Public Health from Harvard, Ajay and she discussed the need to diversify from the family textile business which was a commodity business to one in the "knowledge area" - around that time, Nicholas Labs was up for sale.

They were, she recalls, nowhere in the reckoning since other suitors had a history of pharmaceuticals and deeper pockets, so Ajay went to meet Mr Barker, the owner, and told him his dream was to make the company one of the top five in the country.

You're mad, Barker responded, but something must have clicked since the Piramals got the company. Ten years later, husband and wife went to meet Barker in South Africa to share their triumph - Nicholas was number five in India's pharmaceuticals sector. 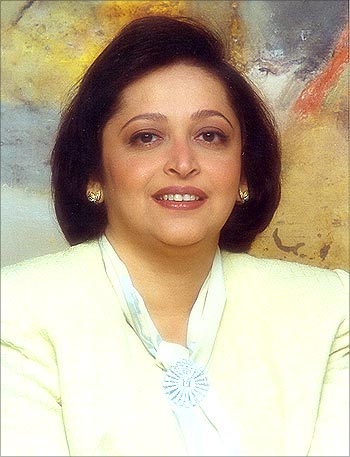 Image: Swati Piramal has 3 patents to her credit.

But we were still doing business the traditional way, she regrets. That's when Heochst Marion Roussel (HMR) called her up to say it was selling the R&D centre in India, would they be interested?

A quick consult and, five minutes later, she called to say they were. HMR's head came home to ask what they'd be willing to pay - "Ajay said, you tell me...this really floored them!" We got, along with 100 scientists, the best library of microbes in the country, she exults.

All Piramal Healthcare's R&D, all the patents, she says, come from this library - "there is traditional knowledge (bitter gourd juice to cure diabetes, for instance) but we are getting science to sit upon that knowledge". Fifty of the 400 scientists the group

Her own patents, she has three, are also based on this library. The first, for renal problems, has now been discontinued since its effect was too slow; the one for arthritis (it had to have potassium since existing drugs had sodium which aggravated hypertension) still nets around Rs 40 crore (Rs 400 million) a year for Piramal Healthcare; the third, a cure for malaria, went nowhere since the government which is the largest buyer of such drugs preferred to stick to chloroquine.

In a nutshell, all R&D (the group has a patent portfolio of 300 global patents and 14 more New Chemical Entities are in the pipeline) in the group is looked after by Piramal, as are strategic partnerships.

"I thought dermatology was a very big area...we've just got into a partnership and have released 15-16 products..." Piramal's idea of a National Diagnostic Network contributed Rs 169 crore (Rs 1.69 billion) to the group's Rs 3,281 crore (Rs 32.81 billion) topline last year.

In other words, Piramal's saying, neither I nor my women committee heads are there because we're daughters/wives/mothers.

As talk goes back to north Indian men, I make a strategic shift, saying all this stuff about a glass ceiling doesn't really apply to India or the sub-continent...we have a tradition of accepting women leaders...Indira Gandhi, Sonia Gandhi, Mayawati...Benazir Bhutto...Khaleda Zia...the list goes on.

In which case, Piramal ends with the question, why are women not doing as well in business, why is the idea of 100-women chairs so novel? Think about it.