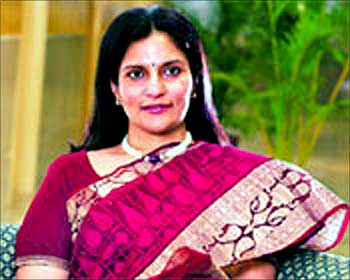 More and more daughters are taking over the family business from their fathers, not because they have inherited the empire by virtue of their birth, but because they have proved that they are qualified and competent to take charge of corporate affairs.

While some have just joined and are still helping the business grow, the climb to the top for most others has been tricky.

These women have thrown their entrepreneurial energy in to the family business and helped the firm stay ahead of the curve while taking on ever greater responsibilities on key accounts.

They have broken the psychological block that a son and not a daughter is a potential successor!

As, women continue to expand their role in the business world and show that they are as capable as men, fathers are giving key positions to their daughters in the family business.

Very recently a succession plan was announced by the chairman of health service provider Apollo Hospitals. Prathap Reddy said his eldest daughter Preetha Reddy will take charge of the group once he retires.

Reddy has four daughters and they have become the four pillars on which his pioneering enterprise stands today.

Reddy, in some of his recent media interviews, has said his daughters are brilliant and they are managing things beautifully.

With a health care empire that only seems to be growing, all thanks to the dynamic four daughters, Pratap Reddy is one proud father. 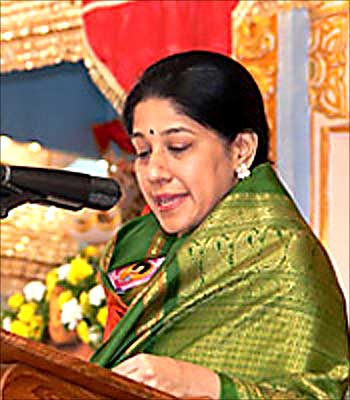 The eldest daughter of industrialist A Sivasailam, is the pride of her parents and a well known entrepreneur of India.

Mallika Srinivasan joined her father's Amalgamations Group in 1986. She was made the general manager of Tafe (Tractors and Farm Equipment) Company. She converted Tafe into a hi-technology-oriented company and increased the turnover substantially.

The company found a niche for itself as the leading tractor manufacturer, and expanded its area of operations under her guidance.

Mallika did her MA (econometrics) from Madras University. She then went abroad to pursue further studies. She did her MBA from the Wharton School of the University of Pennsylvania.

Married to Venu Srinivasan, the chairman and managing director of TVS Motor, she is one of the most successful women CEOs in India. She was Economic Times Businesswoman of the year 2006.

Interestingly, Lakshmi Venu, daughter of Venu and Mallika Srinivasan, was recently inducted as a director on the board of auto-component maker Sundaram Clayton Ltd, TVS Motors' holding company.

This move was viewed as a succession plan for TVS Motor, India's third-largest two-wheeler manufacturer by sales.

Besides having successful industrialist parents, Lakshmi has impressive educational credentials.

The school topper from Sishya School in Chennai, Lakshmi joined Yale and graduated in economics and is a doctorate degree-holder from the University of Warwick in the United Kingdom. 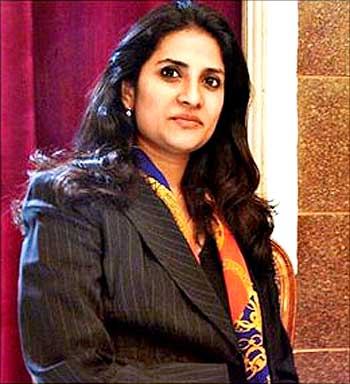 Sulajja Firodia Motwani is the joint managing director of two-wheeler firm Kinetic Motor Company, a position she inherited from her father.

Being at the helm of Kinetic, she faced the challenge of leading a company after their joint venture partner, Honda, moved out. She had to deal with the market when scooters were not in fashion and motorcycles were the rave.

Kinetic had to make its debut in the motorcycle business and tied up with overseas manufacturers to bring in modern scooters to lure back customers.

Sulajja coped with this difficult part, made her parents proud and paved way for her siblings.

Sulajja did her MBA from Carnegie Melon and worked in California for a couple of years before heading back home to join the family business. 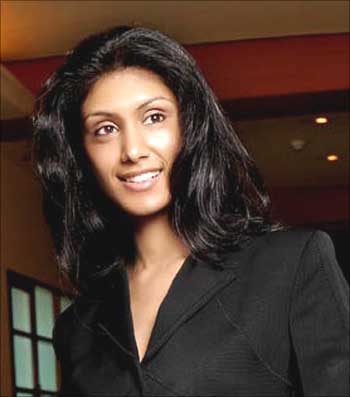 Roshni Nadar, the only daughter of tech billionaire Shiv Nadar, took over as executive director and CEO of HCL Corporation at the age of 27.

This young heiress did her MBA in social enterprise management and strategy from the Kellogg Graduate School of Management.

After completing her education and returning back home Roshni kept herself involved in brand building and social initiatives of HCL.

As her degree suggests, she has her skills set in the social enterprise management, and therefore in her role at HCL she is involved only in the development side of business, while her father and founder of HCL, Shiv Nadar has full discretion to take key decisions in the interest of the company.

Roshni is involved only in the investment company HCL Corp, and not in either HCL Infosystems or HCL Technologies - both managed by a group of professionals.

Interestingly, this young lady had her interests in media and had changed her major from Economics to film. She majored in radio, television and film and did internships with CNBC and CNN before she went to pursue a career in management. 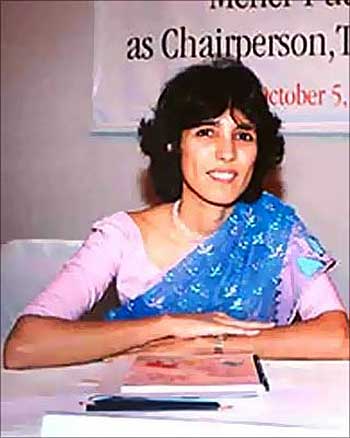 Another great example is Meher Pudumjee. She took the chair once occupied by Thermax founder and her grandfather AS Bhathena, nurtured by her father Rohinton Aga and preserved by her mother Anu Aga.

Meher joined Thermax as a trainee engineer in August 1990. In a year's time, she was given the responsibility to manage the company's overseas operations in the UK. She returned to India in 1996 and became a member of the board of directors.

After her stints with the treasury and working capital management functions, she moved to corporate strategic planning. In 2001, Pudumjee was appointed non-executive director of Thermax and became vice-chairperson in 2002.

She learned the ins and outs of the business for 14 long years before succeeding her mother in 2004. Along with her husband (Pheroze Pudumjee), Meher has put Thermax on the path to success.

Meher, is a postgraduate in chemical engineering from the Imperial College of Science & Technology, London. She was the Business Standard CEO of the Year for 2007-08. 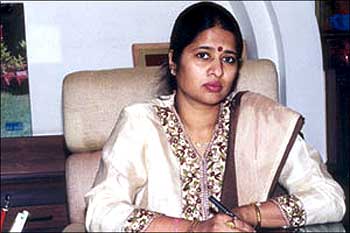 Although Anuradha Desai may have inherited her father's empire by virtue of her birth, she has strived hard to expand into newer areas of poultry business and survived bird flu outbreaks.

Anuradha has fine tuned the vision she inherited from her father and is today the voice of the Indian poultry industry. She has increased the turnover of her father's business manifold.

She also added the export initiative of Venky's Chicken to her success story.

Shefali Munjal was inducted into father Sunil Kant Munjal's Hero Group to explore the company's greenfield projects. Where others failed, she kept the IT and ITeS businesses afloat, and added new ones to the portfolio.

Besides these projects, she has been an integral part of the business development and strategic decision making team at Hero Corporate. Shefali is actively involved in strategic reviewing of operations and is a good team player.

She is currently doing a senior management program at Harvard Business School, and is expected to graduate in 2011.

She is also a member of the Confederation of Indian Industry's National Committee on Insurance and Pensions, a founding member of the CII Young Indians Council, the Entrepreneurs Organization (Delhi Chapter) and The Art of Living Foundation. Shefali is also a trained pianist, adventure sports enthusiast, amateur artist and is fluent in French. 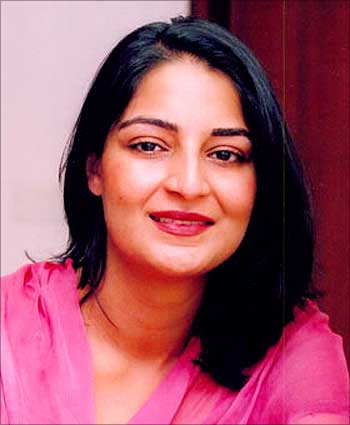 This multi-tasking persona worked with GE Capital in risk underwriting before joining the group.

Interestingly, Pia's inclination towards films was not newfound. During her academic days she pursued a short term film-making course from New York University after graduating from the Wharton School, University of Pennsylvania with a major in finance.

Priya gave a new dimension to the Park Hotel chain. Priti took over the creative side, and looked after the Oxford bookstore, the Cha Bar chain and the real estate division. Brother Karan Paul is now chairman and handles other businesses. 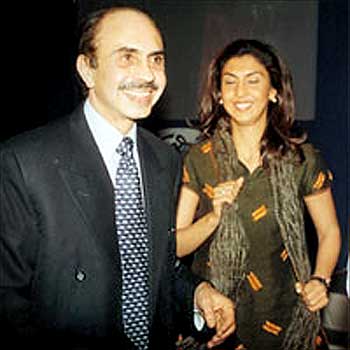 For Godrej daughters it was tough, the kids had to join as interns, prove themselves, and move ahead.

When his son, Pirojsha, started work at Godrej properties after a three-week induction programme like all others, all his father had to say was that Pirojsha's career would depend solely on his performance, as it would for any new entrant in the group.

Same was the case with Shalaka Gulabchand, daughter of Ajit Gulabchand, chairman and managing director of Hindustan Construction Company, and the man behind Bandra-Worli sea link.

She joined the company in September 2000 as an executive (planning and business development). There was no time frame for the only daughter as to when she will be part of the board. It was performance based. 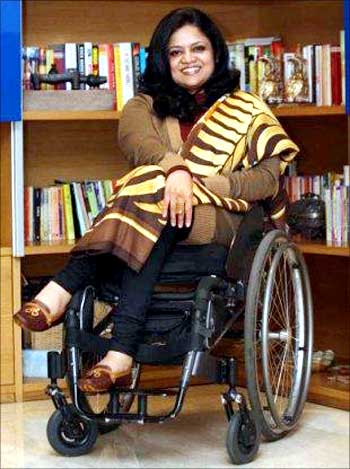 Sminu Jindal, daughter of Prithviraj Jindal and granddaughter of OP Jindal, joined the family business as a trainee at the fag end of her teens in Swastik Foils, a unit of Jindal SAW.

She turned around the sick unit into a profitable venture in the very first year of joining by pioneering the production of ultra thin gauge steel that was unheard of in that era and time.

She then trained her sight on Jindal SAW in 1997. Soon she was at the helm of affairs as the managing director.

In spite of being confined to the wheelchair due to an accident at the age of 11, she never allowed her spirit to be chained.

She initiated environment protection steps like effluent treatment plants and environment friendly processes much before the government regulatory authorities' drive. Jindal SAW Ltd was one of the very first companies to be awarded all environmental clearances. 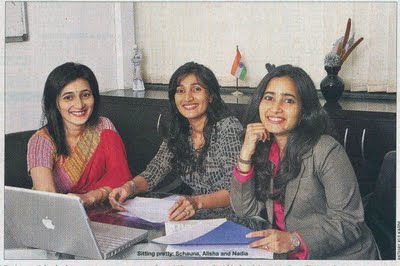 The eldest, Schauna Chauhan did her B-schooling and joined the Parle Agro in 1999 and by 2002 she was running the business. She is now the CEO, while daddy remains the chairman.

Alisha Chauhan was passionate about fitness and opened 'V3' a chain of health and fitness centres. She diversified the business through this venture.

Meanwhile, the youngest, Nadia Chauhan, started to attend marketing meetings with her dad at the age of 11. Officially though, she joined the business in 2002.

A commerce graduate, Monica explored her passion for publishing by joining the family business as a trainee in the MBD group's publishing and printing wing at the age of 16. She is now the senior executive director of MBD.

Meanwhile, Sonica, executive director at MBD and an MBA in finance from International Management Institute France, handles key projects in hospitality and real estate sector, right from project planning to execution and is also responsible for branding, positioning and assisting in expansion plans of the group. 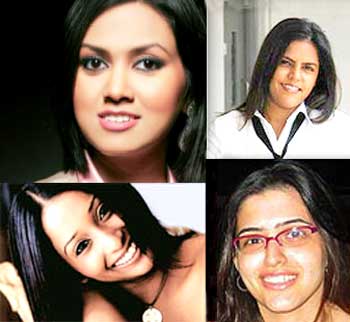 Lara Balsara, joined father Sam Balsara's Radison Communication at the age of 26. Lara did her BA from St Xaviers College in Mumbai and went to the UK to pursue her masters in marketing from Bristol University.

She came back and joined Madison as a trainee in 2003. She diversified the business further and was responsible for the success of Madison Teamworks and Entertainment, Madison Retail Paradigm and Madison RKD retail/iq.

Rangita Nandy joined father Pritish Nandy's PNC as a management trainee and has progressed to creative head of the company.  She has been a producer of bollywood films like Chameli, Jhankar Beats, Shabd and Pyar ke Side Effects.

Meghna Puri has been a part of dad Subhash Ghai's Mukta Arts from the age of 16. She helped her father fulfil his dream of setting up an institute to teach film making. Today, she is the president of the institute--Whistling Woods International. She did her business management from King's College in London in 1999.

Devita Saraf joined her father's Zenith Computers while she was a student. The Topper Laptop, Power of Seven Laptop range, Infotainer II, Multiply and the Topper Desktop are some of Zenith's products launched under her leadership.

She currently spearheads Vu Technologies, the pioneer in the concept of 'Luxury in Technology'. She is also executive director of Zenith Computers.

Ashni Biyani, daughter of Kishore Biyani, got herself involved in the innovation and incubation division of Future Group at a young age of 22. She did her schooling at Queen Mary, studied at HR college in Mumbai, and did a course in textile designing and design management.