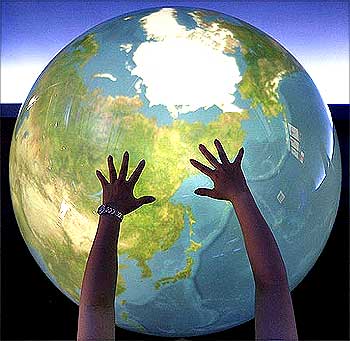 Image: A visitor places her hands on a "Tangible Earth", a digital globe which real time global metrological data is fed through the Internet from about 300 places in the world in Japan.
Photographs: Yuriko Nakao/Japan.

It may sound surprising, but the Internet is actually 40 years old today. Len Kleinrock, a computer scientist and his team at UCLA began experiments, laying the foundation of what later became the Internet.

On September 2, 1969, two computers send out meaningless test data at Kleinrock's lab at the University of California, Los Angeles. In the present day, it is well nigh impossible to imagine a world without the world wide web.

And which are the countries with the best Internet connection speed? No, it's not the United States.

South Korea, Singapore, the Netherlands, Denmark and Taiwan are the top five countries listed in terms of access to high-speed Internet.

The United States ranks 28th in the world in average Internet connection speed according to a report by the Communications Workers of America (CWA).

The average download speed in South Korea is 20.4 megabits per second (mbps), four times faster than the US average of 5.1 mbps. 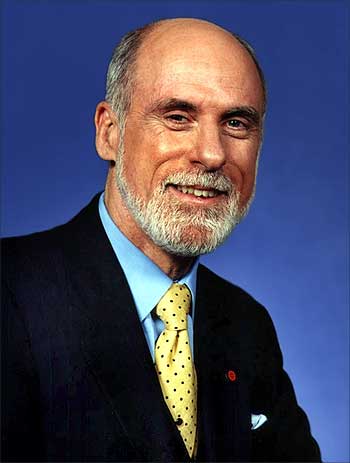 The Advanced Research Projects Agency Network (ARPANET) created by the United States Department of Defense during the Cold War, was the world's first operational packet switching network, and the predecessor of the global Internet.

ARPANET became the technical core of what later turned to be the world's favourite 'Internet'.

The Internet and Transmission Control Protocols were initially developed in 1973 by American computer scientist Vinton Cerf as part of a project work of the Defense Advanced Research Projects Agency (ARPA) and directed by American engineer Robert Kahn.

Vinton G. Cerf, known as the 'father of Internet', is now the vice president and chief internet evangelist for Google.

He is responsible for identifying new enabling technologies and applications on the Internet and other platforms for the company. 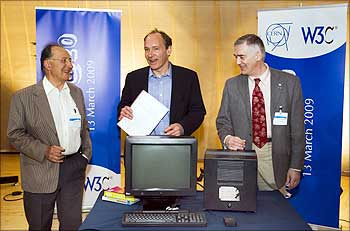 The birth of www

The design of the Internet was done in 1973 and published in 1974.  The roll out of Internet took place in 1983, after ten years of research and hard work.

Later, the domain names system was proposed. This was followed by introduction of suffixes .com, .gov and .edu in 1984.

He came up with the idea of a project based on 'hypertext' while working at CERN, the European Organization for Particle Physics Research.

Berners-Lee's aim was to enable sharing and updating of information among researchers.

He joined hands with Robert Cailliau to build a prototype system named Enquire. This programme formed the basis for the World Wide Web. 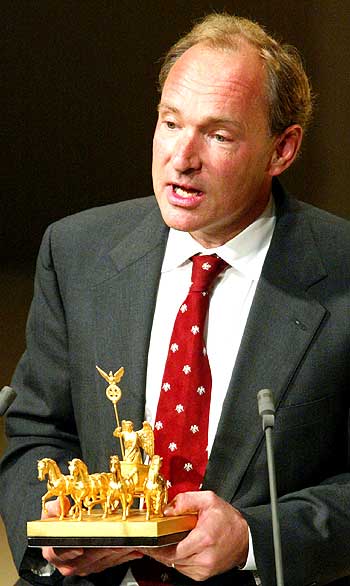 By December 1990, WorldWideWeb became the first successful demonstration of Web clients and servers working on the Internet.

The first Web site built by Berners-Lee at info.cern.ch went live on August 6, 1991. Berners-Lee also made his site the world's first Web directory, adding a list of other sites.

The most remarkable fact about Berners is that he gave it away, without any patent and royalties. 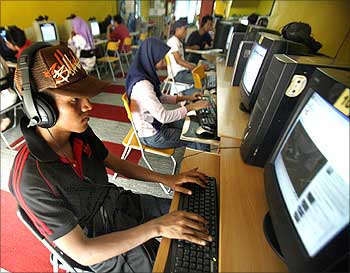 With the introduction of the World Wide Web, the Internet gained popularity. It enabled the internet to store text, images, sound and video.

It used a system of hyperlinks (links) using a web browser. The earliest web browsers were Mosaic, Netscape Navigator and Microsoft's Internet Explorer.

In 1993, Marc Andreessen and his colleagues at the University of Illinois created Mosaic, the first web browser that combined graphics and text on a single page. 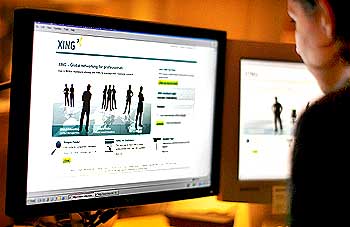 E-mail started in 1965 for multiple users of a time-sharing mainframe computer to communicate. MIT first demonstrated the Compatible Time-Sharing System (CTSS) in 1961.

It allowed multiple users to log into the IBM 7094 from remote dial-up terminals, and to store files online on disk.

This new ability encouraged users to share information in new ways. E-mail started in 1965 for users of a time-sharing mainframe computer to communicate. 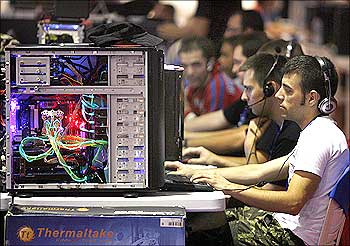 Image: People surf the web during the annual
Photographs: Heino Kalis/Reuters
Addicted to the Net

The Internet has hooked billions of people in its web. According to the latest figures, the number of internet users in the world is whopping -- 1,596,270,108. 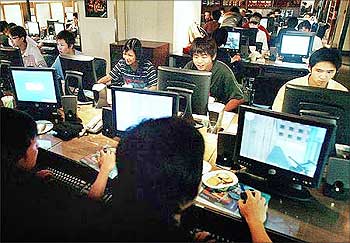 IPv4 addresses are likely to run out by 2011. This will affect the connectivity of the internet and curb its further growth.

The answer to this crisis is Internet Protocol version 6 (IPv6) which will provide an unlimited number of addresses. It will also enable efficient rollout of broadband, Internet-connected mobile phones and sensor networks.

Many existing networks would need to be upgraded to accommodate the new protocol to growth further and make better and faster technological advances in a medium that unites the world.