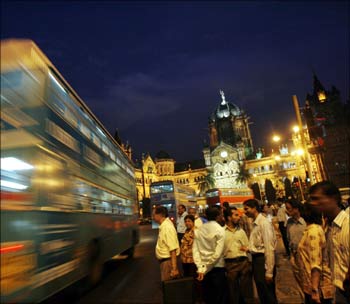 India's financial hub Mumbai is emerging as one of the 'world capitals of the future', with an expanding industrial base, the world's largest movie industry and a burgeoning middle class making the city globally prominent, a latest study has said.

Other Indian cities, Bangalore and Hyderabad, also find mention along with Mumbai with the two cities having 'leveraged software and business services into a seemingly unstoppable growth engine,' according to a Forbes.com report.

"Mumbai's prominence rests not just on an expanding industrial base, but also on the illustrious Bollywood, the world's largest movie industry. The bust of Mumbai's ridiculous housing-price boom has actually seemed to help the economy," the report by Forbes columnist and presidential fellow at Chapman University, Joel Kotkin said. 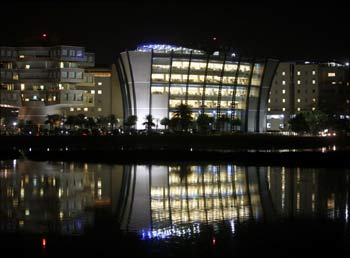 Image: A view of the Bhagmane Tech Park in Bangalore.
Photographs: Stringer/Reuters

While the gulf between the extremely wealthy and destitute remains deep in Mumbai, a burgeoning middle class is helping reshape the economy, Kotkin said, adding that 'sales of small vehicles, motorcycles and modest apartments are all the rise.'

'India's major cities, which still have some of the world's worst slums, may have built the broadest economic base out of the cities on our list. Other cities making the cut are Beijing, Calgary, Dallas, Dubai, Houston, Moscow, Perth, Sao Paulo and Shanghai.'

"In less than a lifetime, we have seen the rapid rise of a host of dynamic new global cities -- and the relative decline of many others. The world capitals of tomorrow may largely be not in the Western world, but in countries such as China, Russia and Australia," the report said. 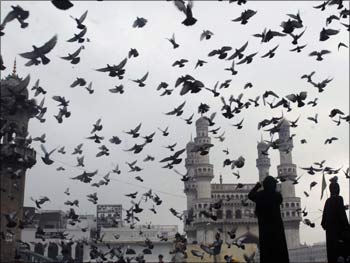 Image: Pigeons fly against the backdrop of the historic Charminar monument in Hyderabad.
Photographs: Krishnendu Halder/Reuters

Terming as 'remarkable' the rise of cities like Mumbai, Bangalore, Hyderabad, Beijing and Sao Paulo, the report said a quarter century ago these cities were either obscure or better known for their destitution than their rapid construction.

While they may not have yet surpassed current leading global centres like Tokyo, London, Paris, New York, Chicago, Singapore and Hong Kong in wealth or economic power, they are 'clearly gaining on them, and with remarkable speed. What these places do with their new wealth will ultimately shape this first urban century'.

Over the past 25 years, most of the biggest rail, road, airport and sanitation systems have been built not in Europe or America, but in East and South Asia, the Middle East and Brazil. Even as the West tries to work through its housing crisis, residential real estate prices are on the rise in cities like Mumbai, Bangalore, Beijing and Shanghai, it added. 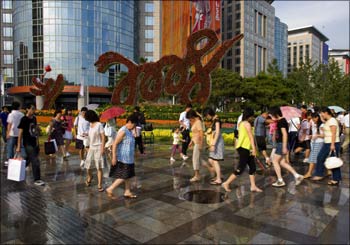 Manufacturing has propelled the rise of Chinese cities, while Sao Paulo's growth spans everything from shoes and aerospace to technology.

Fossil fuel, has powered the rise of Moscow and Dubai, while Calgary, now boasting of the highest per capita income in Canada, has become Toronto's main challenger for corporate headquarters in the country.