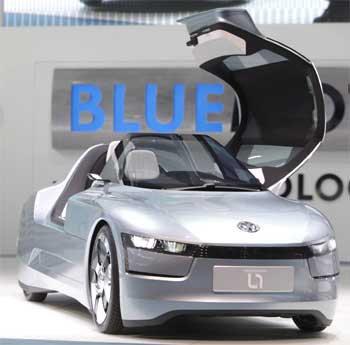 Putting aside the financial woes that threatened to engulf the automobile industry in a post-Lehman Brothers world, 753 manufacturers are back at the Frankfurt Auto Show 2009 to flaunt their wares. From compacts to super-premium vehicles, the companies have new models to offer. Crisis in the automotive industry is not over yet, but there are increasing signs that the bottom might have been reached.

Volkswagen L1: The most fuel-efficient car

The new 1-litre concept car -- so named because it consumes only 1.38 litres of diesel per 100 km. It features a carbon fiber/plastic body and weighs just 380 kg.

Top speed is 100 mph. The tandem seats are accessible from a hinged roof cover.

The L1 has two driving modes -- eco and sport. 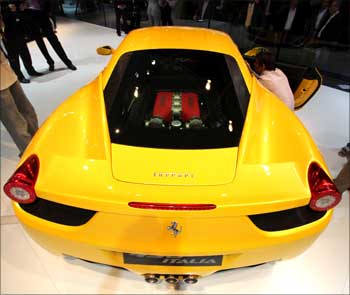 It's a whole new look for Ferrari's mid-engined supercar, combining aerospace alloys with a Pininfarina design.

The nose and the small 'aeroelastic' winglets deform as the Italia's speed rises, shrinking the size of the radiator inlets and lowering drag.

The interior has an upmarket feel and there's even power adjustment to the steering wheel. 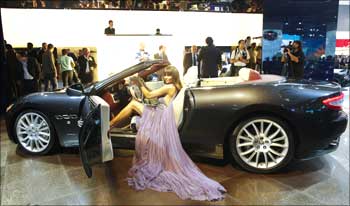 The GranCabrio represents the very essence of Maserati in terms of open-top cars.

It is powered by a 4.7 litre V8, 323 kW engine and is the convertible with the longest wheelbase in the market.

The GranCabrio's roof is strictly canvas-made, emphasising the Maserati tradition.

The Maserati GranCabrio will be marketed starting next winter. 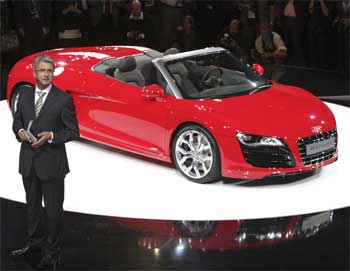 The top-of-the-line R8 Spyder 5.2 FSI quattro features a V10 engine outputting 525 horsepower and a zero-to-100-km-an-hour time of just 4.1 seconds, according to the automaker.

The two-seater has a cloth top weighing only 30 kg and it features the aluminum Audi Space Frame, giving the car a weight of just 1,720 kg.

The R8 Spyder has a top speed of 313 km per hour and it features plenty of safety items, including quattro permanent all-wheel drive, rollover protection in the bulkhead, air bags in front and head and thorax side air bags in the backrests.

The new R8 Spyder will be available next spring. 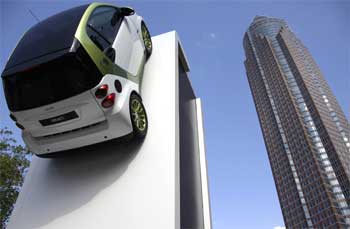 Held once every two years, the Frankfurt Auto Show IAA (Internationale Automobil Ausstellung) is the largest in the industry.

From Volkswagen to BMW, Mercedes to Porsche, the German automakers take centerstage at the Frankfurt Motor Show. 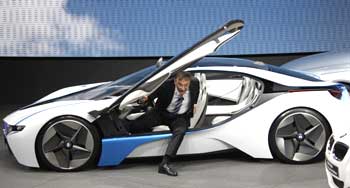 The Vision concept is powered by three sources

The interior of the car has a flowing instrument panel and a seating arrangement designed to give passengers a floating-in-air feel.

The upholstery is mostly made with natural materials although Kevlar is used for the seats. New technology such as a 3- dimensional head-up display and BMW night vision is included.

The chassis of the Vision EfficientDynamics Concept is constructed mostly from aluminum, with the roof and the exterior body made almost entirely from a special polycarbonate material. 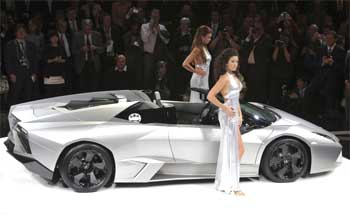 Only 15 Lamborghini Reventon Roadsters will ever be built

It ranks as the most powerful and expensive Lamborghini to date, costing Euro 1 million.

The exterior styling was inspired by the 'the fastest airplanes'. The Reventon is named after a fighting bull in keeping with Lamborghini tradition. 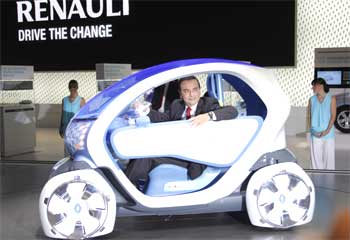 Twizy Z.E. Concept is an all-electric vehicle aimed primarily at busy city dwellers who need to pick their way through the urban jungle.

The ultra-compact dimensions of Twizy Z.E. Concept (2.30 meter in length, and just 1.13 meter wide) ensure that it is nimble enough for urban use.

The four-wheel arrangement, open bodywork and a seat format which puts the driver and passenger behind one another express Twizy Z.E. Concept's distinctive character. 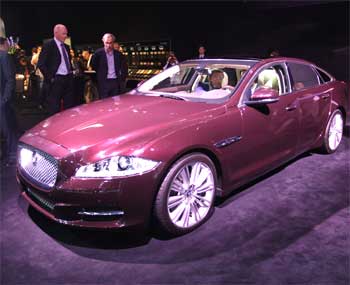 The new XJ hits showrooms in Europe early next year with a choice of V8 petrol and 3.0 diesel engines.

All models come with a panoramic roof and virtual instruments as standard. 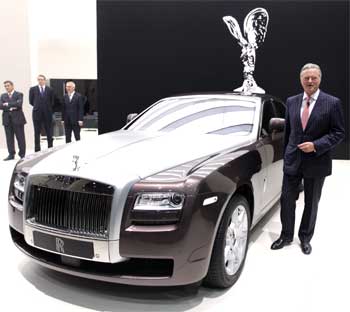 Each Rolls-Royce Ghost is hand-built to order

The Ghost is built around a steel monococque chassis and suspension system including Dynamic Stability Control and Anti-Roll Stabilisation to create a more dynamic drive.

Powered by a new twin turbo 6.6-litre V12 engine, it is virtually silent, with 80 per cent of its torque available from idle.

Coupled with the 8-speed ZF gearbox it accelerates from 0-62 mph in just 4.9 seconds and has a governed top-speed of 155 mph.