Villagers on how SEZs will affect their lives 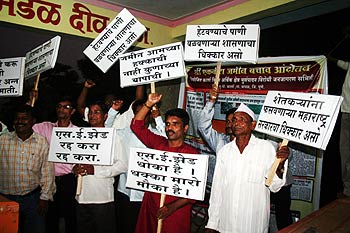 Image: Protesters raise anti-SEZ slogans in Div, Raigad
Photographs: Uttam Ghosh
Fear of being displaced, fear of being uprooted from their native culture, fear of being exploited by shrewd politicians in connivance with developers of Special Economic Zones is the common strand that binds Sunil Bhaskar Naik from Dheran village in Raigad district, Uttam Bodke from Sinnar in Nashik, both in Maharashtra, Tulasi Kenchaguddeand Jayanth Suvarna Banghi, both from Mangalore in Karnataka.

What also binds them together is their steely resolve to fight the forces that have aligned against them, with help from a motley group that includes the National Alliance of People's Movements, the National Campaign for People's Right to Information, the Tata Institute of Social Sciences, the India Centre for Human Rights and Lawyers' Network, the National Centre for Advocacy Studies, and the Jagatikaran Virodhi Kriti Samiti.

While none of these villagers are opposed to the development of their respective regions, they say they abhor the way in which politicians and industrialists are exploiting them and their environment for huge profits.

They are all victims of the Special Economic Zone Act passed by the Lok Sabha in 2005 in "just two days without much debate," says Aruna Roy, winner of the Magsaysay Award in 2000. The Act deems SEZs as 'public purpose' and envisages acquisition of land either by the government or its affiliated agencies or by private developers directly from landowners.

rediff.com's Prasanna D Zore and Uttam Ghosh spoke with Sunil, Uttam, Tulasi and Jayanth to find out why they are opposed to SEZs.

We also spoke to Vishwas Mahadev Patil, a maverick villager who sold an acre of his land to Mumbai Special Economic Zone Private Limited, a company promoted by Reliance Industries Chairman Mukesh Ambani, for Rs 10 lakh (Rs 1 million), who believes that all farmers who are opposed to MSEZPL will line up at Ambani's door if his company offers them Rs 80 lakh (Rs 8 million) per acre. Vishwas represents farmers who have part sold their land to MSEZPL and can sell the remainder if the price is good. 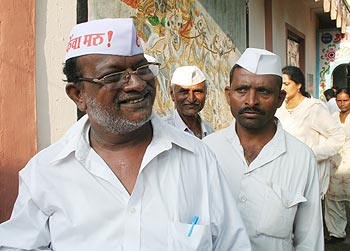 This 51-year-old is a maverick like Vishwas, but one opposed to Tata Power's and Reliance Power's (owned by the Reliance Anil Dhirubhai Ambani Group) 2,400 MW and 4,000 MW coal-based power plants being set up near his village.

He contested the 2009 Lok Sabha election from Raigad constituency, polling 22,000 votes against veterans like the Shiv Sena's Anant Gite and the Congress's A R Antulay.

A fine orator, he understands the pulse of the people who he is addressing as he asks them if the incumbent state government 'has the brains to let SEZs rape their fertile land' and gets a loud 'no' in response from his audience.

An active social worker for the last 30 years, Naik, a resident of Sion Koliwada, north-central Mumbai, began to organise villagers in his native Dheran after Tata Power and Reliance Power proposed their coal and gas-based power plants.

"Can't they produce power using wind energy, solar energy and tidal energy?" he asks. "The smoke emanating from these power plants and polluted water released from them will only make our lands infertile and kill fish in the adjoining area tremendously," he argues, explaining why he is opposing two of the biggest power producers in India.

Tata Power, he says, wants to acquire 1,200 acres while Reliance Power wants to buy some 3,500 acres. "Both these companies put together will burn 5.5 lakh (550,000) metric tones of coal to fire their gas plants," he says, explaining what he means by environmental disaster.

He contends villagers in Dheran currently earn an annual income of Rs 50,000 per acre. Naik says no amount of compensation can make these villagers part with their land. The Rs 700,000 to Rs 800,000 per hectare that the two companies plan to give the villagers for their land will get over one day, he adds, but the Rs 50,000 they earn per acre will last them and their children for ages to come.

Displaying his maverick side, he says: "We can buy out the Ambanis and Tatas in five years time from the wealth that we generate from our lands."

He rattles off the numbers: "Multiply Rs 50,000 by 4,700 acres. Multiply that figure by five and you will see how much money we can generate in five years." He continues with his rhetoric even if the numbers don't add up to the net worth of the Tatas and the Ambanis.

Naik says the struggle against these powerful business houses will continue in a non-violent manner. "We have been fighting them for the last two years and we will continue with our agitation till our last breath. Even if we die, we have prepared the next generation to carry forward the fight against injustice done to us."

'We're prepared to do or die' 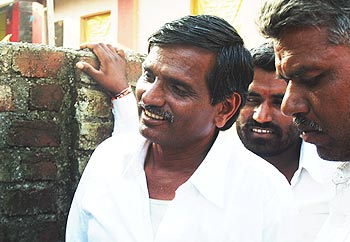 Unlike Naik, Bodke is an exasperated villager.

The patience of villagers in the area where he lives, he says, is growing thin with local government officials and managers at IndiaBulls Industrial Infrastructure Limited which plans to set up a multi-product Special Economic Zone in Nashik.

"If they don't understand the language of peace then we can teach them a lesson in the language they understand," warns Bodke who had travelled from Sinnar to put forth his case before a panel who plans to collate the documentary evidence provided by farmers in eight states and put forth their cases to the Union government who they hope will see reason and scrap the SEZ Act 2005.

"The state government paid farmers only Rs 140,000 per acre for a piece of fertile land that produces onions, sugarcane, tomatoes, cauliflower, corn and bajra," says Bodke.

"The farmers of Gulwanch and Musalgaon were told by local tehsildars that the SEZ Act has given the government the power to acquire any land for 'public purpose' and if we didn't take the money they would confiscate our land by force," explains Bodke why farmers accepted the offer.

The government machinery, alleges Bodke, was so efficiently utilised that the farmers were asked to sign on the agreement at night in the local tehsil office where provisions were also made for registering the agreements. The district collector and a local Congress leader, he claims, were present to pressurise farmers to sign on the dotted line.

The state government gave the same land to IndiaBulls on a 95 year lease for double the amount it paid the farmers, says Bodke.

After the incident Bodke and other like-minded farmers decided to launch an agitation against such misuse of State power. Bodke, who owns 7.5 acres of land in Sinnar, is now determined to wage a do or die battle against the government and IndiaBulls.

"We will teach them a lesson in the language they understand if they ever try to set foot on our land now," warns Bodke. Every villager in the area, where he is based, has posted a notice on their farmlands that warns government officials of dire consequences if they try to force their way.

'It will be a tragedy for us' 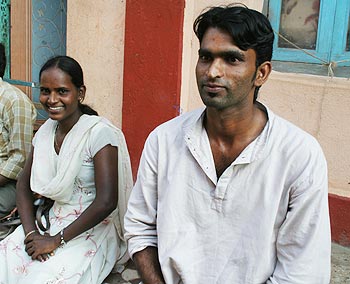 Image: From left: Tulasi and Jayanth

Tulasi, 21, and Jayanth, 24, from Mangalore, though separated by 6 kilometres of land between their villages, share the same story: Both their families face the grim reality of falling prey to a development project that needs their small parcels of land, their sources of livelihood, so that a gas line corridor can pass through.

The Karavali Karnataka Janabhivruddhi Vedike (Coastal Karnataka People's Development Forum), a Mangalore-based organisation, is now helping these young people and other villagers in adjoining areas in their fight against the government-owned Karnataka Industrial Areas Development Board Oil and Natural Gas Corporation, which wants to lay a gas pipeline criss-crossing their land.

Most of this land is so fertile that the farmers grow crops thrice a year. Tulasi and Jayanth's families grow paddy, sugarcane, coconut and chilly that helps them earn Rs 10,000 and Rs 300,000 per year respectively.

Tulasi, whose family includes her two siblings apart from her parents, says the Rs 10,000 they earn is enough to sustain all of them through the year. That is, Rs 2,000 per head per year. At times when her father does not till the land he works as a coolie to supplement his family income.

She fears all that will change soon if the government has its way. A miniscule parcel of land that her father owns -- 0.15 acre -- is in danger of being bought by the KIADB. "It will be a tragedy for us," says Tulasi, a graduate who is currently training to be a nurse.

Tulasi has travelled all the way from Mangalore to Div, a village in Raigad, Maharashtra, so that she can present her case to the panel of eminent persons who she hopes will help her.

A few years ago, Jayanth's family sold 1.75 acres of the 3 acres it owned to Elf Gas (now taken over by Total Gas of France) for Rs 300,000 and an assurance that his elder brother would get a job with the company, which he eventually did.

KIADB now wants to buy the remaining land so that a gas pipeline can pass through. His family is being offered a large amount, but does not plan to sell.

"If they take the remaining 1.25 acres of land that we own we will lose our house as well as the coconut trees that help us earn a livelihood," says Jayanth.

Both Tulasi and Jayanth and their families, assisted by the Karavali Karnataka Janabhivruddhi Vedike, are offering a united resistance against the Mangalore SEZ which is what connects the dots from Mangalore to Raigad. 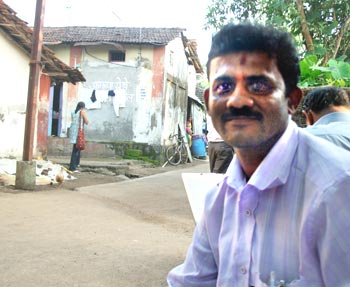 Patil, 32, is a maverick who differs with Naik, Bodke, Tulasi and Jayanth.

He sold a little less than an acre of his land in lush green Raigad to the Mukesh Ambani-owned Mumbai Special Economic Zone Private Limited for Rs 10 lakh (Rs 1 million). He feels he was underpaid and explains why.

First, MSEZPL bought some land for Rs 400,000 per acre, then hiked it to Rs 700,000 per acre and then paid farmers like him Rs 10 lakh per acre, he says. "Had I waited for some more time (what he means is as the agitation against MSEZPL intensifies, the value of land in the area will only get higher) I would have got a higher price."

He believes every villager in Raigad district will line up at Mukesh Ambani's door if the tycoon pays Rs 80 lakh (Rs 8 million) per acre, offers guaranteed jobs and offers every villager an equity worth Rs 20 lakh (Rs 2 million) in MSEZPL so that their children can earn dividends ten years from now when the project starts making profits.

Rs 80 lakh per acre?! Patil smiles at you when you give him that look.

"My estimate is that MSEZPL will make a profit of Rs 5 crore (Rs 50 million) per acre once the project becomes functional and paying Rs 80 lakh now (he suggests staggered/part payments) should not be too difficult for the company."

Patil has plans for all those farmers who would -- if at all -- get the amount he demands. "We will form a company like Magarpatta and enter the real estate business, open five star hotels that will cater to people who come to work in the SEZ," he chuckles.