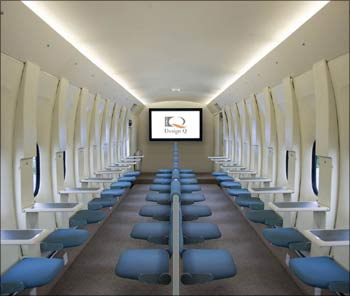 Design Q, a British design firm, has proposed a radical change in the manner in which you sit inside an aircraft.

The company has come up with an innovative, high-density configuration for new sideways seating on airplanes to cut airlines' costs by maximising the number of passengers on board.

If the new design is implemented by cash-strapped airlines, you will see a row of seats facing inward (with your backs to the windows) on each side of the plane and two rows running back-to-back all along the middle of the aircraft. This will be for flights of one hour duration or less.

Military aircraft carrying soldiers already have such a seating arrangement.

You have a choice though: if you want to face forwards (in the traditional form of seating onboard aircraft) you will have to pay more.

The company's co-founder Howard Guy was quoted by the media as acknowledging that people might not be happy with the new seating plan, but if airlines are able to carry more passengers, air fares could drop!