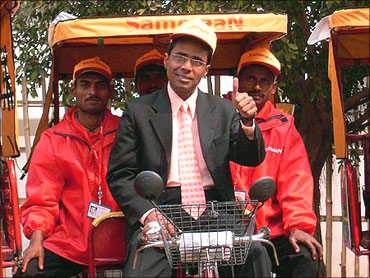 If India's queen of herbal beauty products Shahnaz Husain was the most conspicuous at the Presidential Entrepreneurial Summit hosted by President Barack Obama, Irfan Alam, popularly known as the 'rickshaw man from Bihar' and 'Business Baazigar' for his innovative idea of empowering rickshaw pullers all across India and transforming it into a business model, was the most garrulous.

Always dressed in traditional Indian clothes during the conference and outside, Alam was always ready to provide a treatise of his business concept to anyone among the more than 250 delegates from nearly 60 countries who showed any interest.

When word got around of his innovation, there were plenty who were simply amazed at what he had achieved.

Alam, an alumnus of IIM Ahmedabad, who founded Sammaan Foundation, came up with the idea of making a rickshaw ride pleasurable, equipping the vehicles with music, magazines, newspaper and even first-aid kits in addition to refreshments -- be it fruit juices or mineral water -- and advertisements in the front, rear and the sides, all as a value-add to enhance the lot of the indigent rickshaw-pullers. 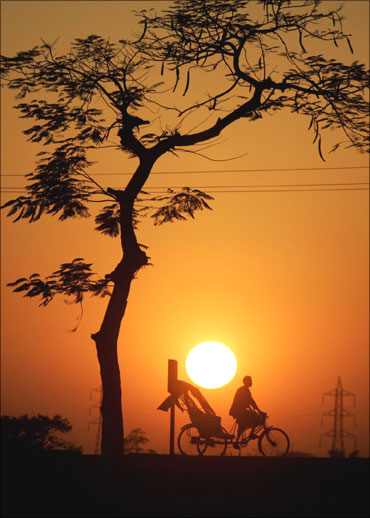 Image: A rickshaw puller on his way home.
Photographs: Reuters

Established in Patna in 2007 with 300 rickshaws, today more than 500,000 rickshaws across India were registered with his company -- community-owned foundation as he would say -- and growing with each passing day.

Chatting animatedly with rediff.com on the sidelines of the conference at the Ronald Reagan Building in Washington DC, Alam said, "Being an entrepreneur, this (the summit) was just a great platform to connect with like-minded people from all over the world. It was a great experience, especially to be in the domain in which you are working."

"You got to know there are people all around the world, who are doing something, somewhere that is entrepreneurial, which is making a difference in the lives of people in the world," he said.

Alam said, "Before coming here, we had been exposed only to our country, but now when we met all these people -- the other delegates -- we got to know that we are not alone, that we are not the only ones making a difference to the lives of people. There are other people who are doing such a great job to alleviate the lives of their own people." 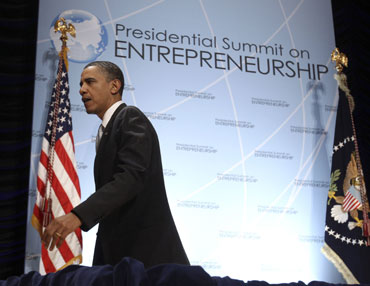 Image: US President Barack Obama at the Entreprenerial Summit in Washington.
Photographs: Reuters

He acknowledged that "as I was amazed with the innovative initiative of so many of the delegates I interacted with, they too were quite taken with what I had done," and went on to explain that "in India, there are 10 million rickshaw operators and each one feeds a family of five or six. . . So it becomes 50 million or almost 5 per cent of the Indian population and they are people who survive on bare minimum resources."

But now, he said, through his venture, "we have made them owners and in penetrating the bottom of the pyramid, made it very interesting for the corporates, because rickshaws have got reach to the rural masses. We have made it a marketing engine and we have designed it in such a way that we have space for advertising as well as space to so many products, product distribution, sampling, and so forth."

Alam said, "Today, we are a family of half-a-million rickshaw operators in India. We are operating in almost 11-12 states and in more than 30 towns, and we can say that if anyone wants to launch a product, I can give you access in more than 10 states, and especially in small town, overnight." 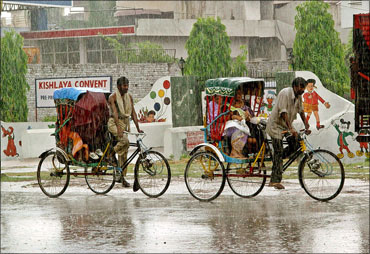 He said in the three years since he put in business model into action, "the foundation has not received any government funding or any grant. For the first year, we not only sustained ourselves, but we have made a little profit. In the third year, we grossed Rs 4 crore (Rs 40 million), out of which some Rs 42 lakh (Rs 4.2 million) was profit. And the organisation is owned by the community -- they are the stakeholders."

At an embassy reception for the Indian delegates, hosted by Deputy Chief of Mission, Ambassador Arun Kumar Singh, Alam said he had very much wanted to gift a rickshaw to President Obama but was not allowed to bring one in time for the summit.

He said, "I would request the Ambassador to help me out to bring that rickshaw for President Obama."

Alam also proudly said how the US Ambassador to India Timothy Roemer, when he visited Patna recently, had driven a rickshaw he had developed. "He ran it for about 200 meters and he said, 'It is good exercise, I would love to do it again'."