Tata Group's flagship property, Taj Mahal Palace and Towers, that is scheduled to reopen formally on August 15, almost two years after the 26/11 attacks, was described as a venerable old lady by its chairman Ratan Tata.

"I won't burden everybody with a speech but say a few words on this special occasion. This flagship property is a venerable old lady and is going to reopen with the splendour that it has enjoyed for over a century," Tata said while addressing a select gathering of hotel staff, reporters and guests at the formal announcement for the opening, in Mumbai on Thursday.

The new and renovated Taj will open its doors to its guests this Sunday when the country celebrates its 62nd Independence Day.

Tata was composed yet delighted when he said that the restoration of the iconic building was possible due to the dedication and commitment of a a team.

"It (restoration) was all possible due to the dedication and commitment of having worked as a team which I think the world has come to recognise," India Inc's senior statesman said.

While he garlanded and paid homage to the hotel's founder and his great grand-father, the staff and crew, showered rose petals from the top floor, just behind the red dome, and pledged that they would reinvigorate their resolve, rekindle their spirit and reinvent the magic to maintain and keep alive the beauty of the "old lady". 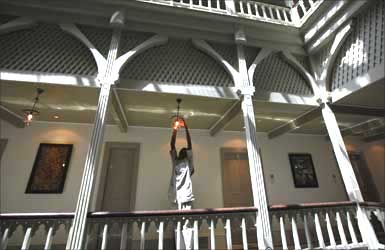 The "old lady" is still strong and standing tall, 20 months after a few Pakistani terrorists damaged it severely on November 26, killing 36 people, he said.

The terrorists had blasted a 10 kg RDX-laden IED following which the red dome was engulfed by fire as also some portions of the building.

Ratan Tata, had then, vowed to build the Taj brick by brick. "We will rebuild every inch," is what he had said on the reopening of the tower wing of the hotel.

The 73-year-old industrialist called on the hotel's most senior and junior staff to express their feelings on the occasion.

It was a heart-touching moment when the senior staff Vijay Pratap Singh, overwhelmed with the opportunity, asked Ratan Tata to pose with him.

The heritage wing will open with 280 rooms, including 42 grand suites, initially. The rest five such as the Pt Ravi Shankar and Tata suites, will open in September as they have not been refurbished completely.

The Ravi Shankar suite is the same room where the sitar maestro used to teach Beatle-member George Harrison. In the room is a prized possession, a sitar, which was donated by Ravi Shankar.

The Tata suite, with markrana marble flooring, will be kept reserved for the chief captains of states and countries. While the executive suites have a tariff of    80,000 onwards, the theme suites' prices are on request. Legend has it that it was not a very enjoyable experience that made Tata foray into the hotels arena.

Somewhere towards the end of the 19th century, Tata is said to have taken a foreigner to dine at a hotel, only to be stopped at the entrance by the doorman.

The reason? Only Europeans were allowed in, not Indians.

That rebuff was enough to make Jamshetji decide to build a grand hotel in India that would be a matter of pride and awe the world over. 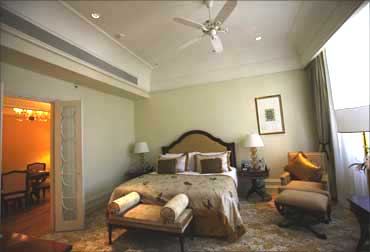 Legend has it that scores of people gathered for the opening ceremony; some as invitees and others as curious onlookers to see the majestic, illuminated edifice that has since been a symbol of India's hospitality across the globe.

When it began, the hotel had only 30 suites and four electric elevators.

It had just 17 guests when it opened, but since then it has played host to Pope John Paul, Queen Elizabeth, former US President Bill Clinton, the Aga Khan, Shah of Iran, George Bernard Shaw, Sir Richard Attenborough, and former member of The Beatles Paul McCartney, Mick Jagger, Jacqueline Onassis, Yehudi Menuhin and Prince Charles among other global celebrities.

The Taj is an architectural marvel and brings together Moorish, Oriental and Florentine styles of architecture.

From Belgian chandeliers to Goan Christian artifacts, the Taj incorporates a myriad artistic styles and tastes. 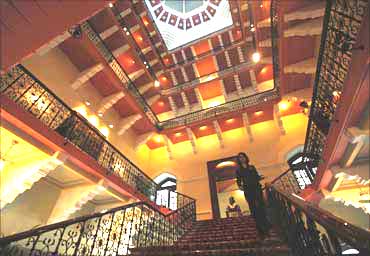 The 280-room flagship hotel has been undergoing extensive renovation post the terror attacks. A total of    175 crore ($37.3 million) has been spent repairing, restoring and upgrading the wing, Anil Goel, executive director of finance at the Indian Hotels Company, which owns the Taj, told a news conference.

The hotel will feature one of Asia's most up-to-date luxury suites christened the Tata Suite among a host of other impressive facilities.

While the restaurants - Wasabi, Harbour Bar and Golden Dragon - have already started receiving guests, the ultra luxury rooms and suites will be officially launched on August 15.

Ratan Tata, head of the Tata Group parent company, posed with staff on the grand cantilever staircase under the hotel's iconic red dome, said it was a very special occasion.

Consultants from Britain, Italy, Singapore, the United States and India helped restore the artwork and antique furniture damaged in the attacks, as well as redesign and upgrade fixtures and fittings.

The 280-room Palace wing will include 42 suites of which 19 are themed, such as the Coral, Maratha, Dutch and Dolphin. 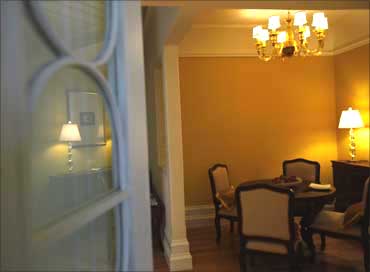 'Second to none, east of the Suez'

The imposing structure, with a large central dome and two wings crowned with smaller domes, stands on a foundation that is 40 feet deep.

It cost Tata a staggering   25 lakh (  2.5 million) to construct the princely marvel. His intention was that the hotel should be 'second to none, east of the Suez.'

It had all the facilities one could imagine - and many one couldn't - for a hotel of its time: power laundry, electric irons, Turkish baths, a chemist's shop, post-office, and more. 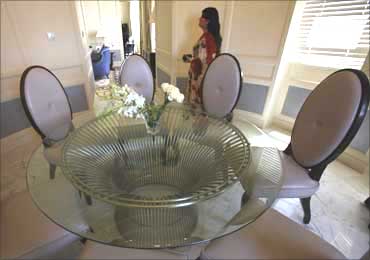 Tata had toured many countries in Europe with the expansive plan for the hotel meticulously sketched in his mind.

He visited London, Berlin, Paris and other cities to make many of the purchases, while his sons, Dorab and Ratan, put their hearts and heads into ensuring that the hotel's interiors were moulded according to their father's desire.

Thus the premium hotel grew in stature and grandeur. By 1906, the Indian Hotels Company, the Taj's proud owners, had a capital worth   30 lakh (   3 million).

The Taj holds the distinction for achieving many firsts, among them India's first air-conditioned restaurant and ballroom and Mumbai's first licensed bar, the Harbour Bar, both built in 1933. 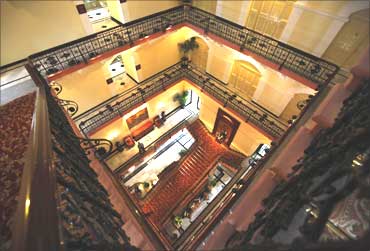 Further expansion of the hotel started in 1968, when a new tower, designed by Rustam Patell, was added to the heritage wing.

The hotel has been continuously evolving ever since its birth, adding new facilities and expanding its physical properties.

It's a member of 'the Leading Hotels of the World', and it has 582 rooms, including 49 spacious suites uniquely decorated with original artefacts and antiques.

'The symbol of India's warmth and hospitality'

On the occasion of the completion of 100 years of the Taj hotel, Tata Group chairman Ratan Tata said that the hotel will continue as the symbol of India's hospitality and warmth.

Speaking at a prayer ceremony marking the centenary of the Taj, Tata said the hotel had drawn up plans that provided immense possibilities of growth.

The Taj Group also announced 100 centenary scholarships for underprivileged children in Mumbai and said all the Taj hotels would plant 100 saplings to mark the event.

Ratan Tata said the Taj Group, which set the standards in the hospitality industry a century ago, will keep offering the best service to all.