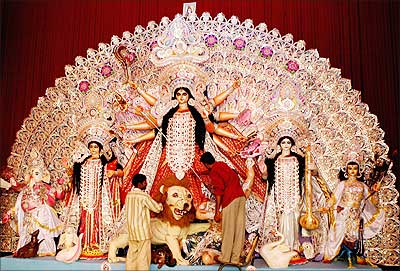 Down the narrow lanes of Kumartuli, the ancient potters' district in Kolkata, the government's flagship employment programme is leaving the gods bereft of their makers.

The successful implementation of the Mahatma Gandhi National Rural Employment Guarantee Act in parts of West Bengal has meant that fewer hands are available today to craft mud and straw into the idols that are central to goddess Durga's homecoming every autumn.

Historically, districts such as Nadia and Burdwan have sent many of the thousands who create the effigies of deity and her four children for what is probably the biggest annual festival in eastern India: Durga Puja.

But the emergence of alternative employment opportunities in the hinterland, along with other generational changes, has translated into a paucity of workmen in Kumartuli. And that, in turn, is resulting in diminishing profits for artisans. 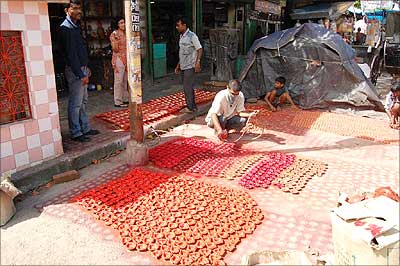 For most in Kumartuli, the Durga Puja is the single most lucrative period in a year, with the district churning out over 3,000 sets of idols.

Preparations, though, start months in advance.

The 200-odd artisans here usually work on an annual bank loan, the size of which is determined by the number of idols each can produce for the festival.

The cost and availability of labour are important factors in this calculation of production capacity.

Upwards of 4,000 migrant labour arrive at the district to work every year.

The more experienced tend to finer work such as sculpting, while the novices may have to start with splitting bamboo and are expected to learn on the job.

This year, however, the district is approximately 1,000 workmen short, which is allowing those present to charge higher than norm. If a few years ago, apprentices were paid about Rs 2,000 per month, the present asking rate has gone up by at least Rs 1,000.

"Most of the craftsmen come from either Nadia or Burdwan, and have been coming here for generations.

"But now, because of this 100 days work, they don't want to leave home to come here and toil for this money," explains Babu Pal of the Kumartuli Mritsilpi Sanskiti Samity, which acts as an umbrella organisation for the artisans.

The 100 days work, as the MGNREGA is known here, is doing particularly well in these two districts, according to government data.

In Nadia district's Krishnanagar I and II blocks, 16,781 households have been given employment this fiscal, out of the 16,789 households that had made the demand. Statistically, that means 99.9 per cent of the demand has been met in the two blocks.

Similarly, in the Kalna I and II blocks of Burdwan district, of the 36,989 households that have demanded work this financial year, 35,760 households have already been provided employment.

The resultant manpower crunch is forcing artisans to pay more for less.

Narayan Chandra Pal, a third-generation artisan in Kumartuli, claims to pay as much as Rs 400 per day per labourer now, compared to half that amount a few years back.

"So I can only do 13 or 14 idol sets every year in this situation. I borrow about Rs 50,000 from the bank every year, which I just about manage of pay off. But if I had more people and more space, I could make even 30 sets," says Pal.

Although the business remains profitable, the bottom line of artisans is being eaten into by the cost escalation of other inputs such as straw and paint.

The human resource problem at Kumartuli is being aggravated by the fact that few of the new generation want to remain in the business of making idols.

Narayan Chandra Pal's two sons, aged 19 and 21, have decided to enter the jewellery business instead of continuing with their fathers' profession. 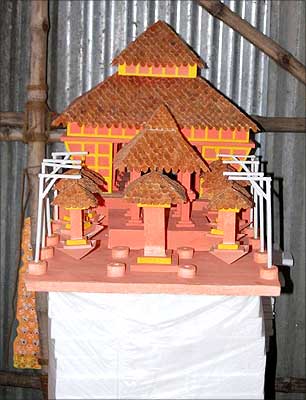 "They have grown up amidst the mud and filth, and after getting their education, this is not a place where they would like to work. The lack of space is a huge problem here," he laments.

Though the West Bengal government is in the process of relocating the idol-makers of Kumartuli into a refurbished complex in the vicinity, many like Pal feel that a generation of artisans has already been lost.

Another Narayan Pal, an artisan from Nadia who has worked at the district for the last 40 years, says he brought his son and nephew here to introduce them to the art. But both left soon after.

"In our times, there were hardly any jobs. I came here to work at my uncle's shop because opportunities in my village were limited. It's not the same anymore," he adds.

But around him, the cramped alleyways continue to throb with activity under the afternoon sun.

Aging craftsmen, interspersed with young blood, continue the intricate tradition of building gods and goddesses, many feet high, by hand.