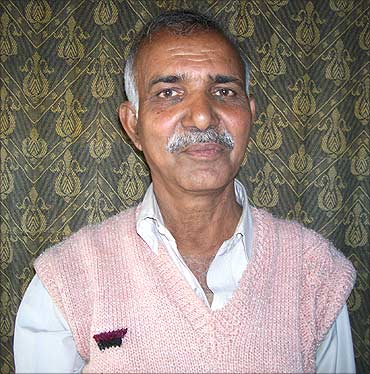 Even as the world craves a cleaner and greener environment, a small device from East Champaran in Bihar could go a long way in making a big difference by reducing carbon emission from generators and diesel engines.

Virendra Kumar Sinha's pollution control device can be attached to generators or other diesel engines, to bring down noise and air pollution.

A patented device, it allows carbon deposits to get collected periodically. This can be reused as raw material for shoe polish and local small-scale industry units.

Virendra Kumar is now fine-tuning the device to further reduce noise emanating from engines. His next project is a pollution control device for four-wheelers.

Just like most other innovators in India, Virendra Kumar faces a severe fund crunch. Most of the work is now done manually but if machinery is in place, he can manufacture the device faster and more cost-effectively.

"There has been no recognition for my innovation even in my home state. If the government does not take interest in such innovations, how can we grow? This device can reduce pollution considerably. My dream is to make this device available to people across India," says 62-year-old Virendra Kumar.

Click NEXT to read more about Virendra Kumar's trials and tribulations... 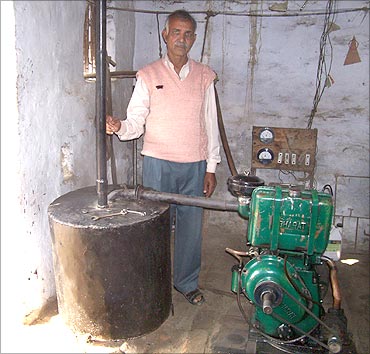 Being the eldest among six children, Virendra's father, a government employee, had high hopes for his son's future. He wanted Virendra to study hard and get a good job as the family had financial problems. But studies never interested Virendra.

"I loved mechanics. Whenever I got time, I played with some equipment or the other. I liked to open devices and check how they worked even during my school days."

After he completed his tenth standard, he left studies for good. His primary objective was to earn money and help his family. He started working as a building contractor in his early twenties. Later, he tried his luck in cloth exports but it did not work out as he had expected.

Finally, he decided to open a fabrication workshop after working with a friend for about two years. 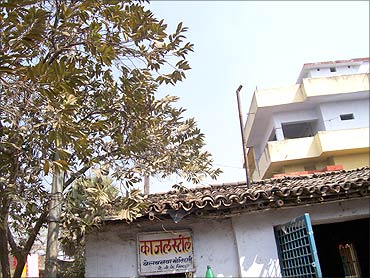 In 1981, Virendra borrowed Rs 15,000 from a bank to start his own workshop. He started by manufacturing iron gates and grills.

Initially, he faced several problems. It was difficult to get many orders to make the workshop sustainable but over a period of time he succeeded. He paid off the loan and was doing reasonably well.

A decade later, Kajal Steel, the workshop named after his elder daughter, faced a major problem. 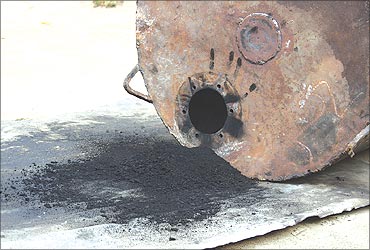 "With many workshops being set up in the vicinity, we had to face tough competition. We were losing business so I started making innovative designs to keep going," says Virendra who has six employees at his workshop.

But that was not the end of his troubles.

"My workshop was just opposite a school. Since we faced frequent power cuts, I had to install a generator. This resulted in noise and air pollution, which affected school children and neighbours. Everyone was up in arms against me. They even filed a case against me in the court."

"It was difficult to move to a new location for me so I started thinking about ways to control this pollution," says Virendra.

This was in a way a blessing in disguise for Virendra. 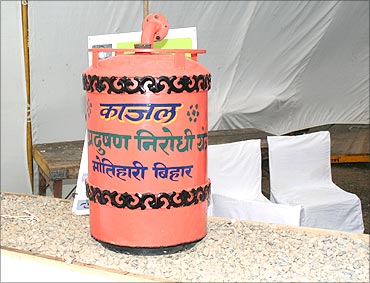 Making of the device

The pressure was building up in the community against his workshop. Finally, he thought about designing an attachment that would minimise the noise and smoke.

He started experimenting with a special chamber that could lessen the noise and break down the exhaust components.

"Money was always a big problem. I did not have access to many accessories that I needed, as I live in a remote village. Patna is about 200 km from here. There was no one to guide me either," says Virendra.

So he had to use materials that were readily available at his workshop like the iron drum, perforated iron pipes, steel channels, baffles and soot collecting tray, et cetera.

It took him six years of experiments to build the first device. Initially, what started as a mission to carry out his work smoothly, turned into a successful innovation with universal appeal and value. 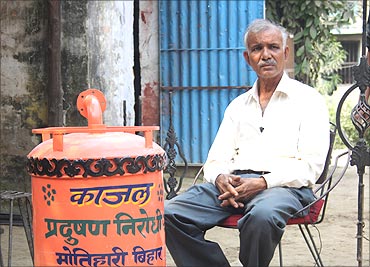 This unit was fitted to the 10 HP engine used in his workshop. He found that the noise levels could be brought down considerably. He continued to work on it to make it more efficient. And he managed to get the desired results.

It was a breakthrough, a great innovation, which could win the appreciation of his rivals as well.

The attachment consists of a cylindrical drum having concentric perforated screens and a few long perforated tubes having equally spaced mesh linings.

The cylindrical drum is placed between the generator and the exhaust pipe. The exhaust gases, which enter the unit, strike against the array of protruding fins and perforated tubes continuously. The vortex results in the dissociation of carbon monoxide and carbon dioxide into carbon particulates and oxygen. 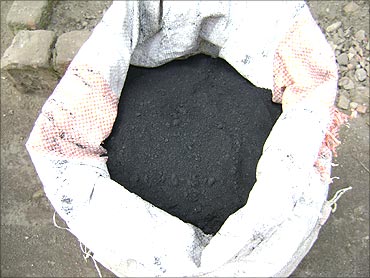 The innovation also works as a silencer by internally cancelling out sound waves as they pass through a series of concentric channels. The carbon-based effluents are removed as soot and solid deposits. As a result the exhaust gases are very clean.

On an average, after 3,000 hours of engine operation, about 5 kg of soot gets collected at the bottom of the drum. In about six to eight months, it collects 12 to 14 kg of carbon, which can be easily taken out.

"The testing of the device was done in BIT Mesra, Ranchi. The officials appreciated my work," says Virendra. The institute also observed a reduction in carbon monoxide and carbon dioxide up to 30 per cent and considerable reduction in temperature.

While it takes one day to make a small device, a bigger one would take two days. 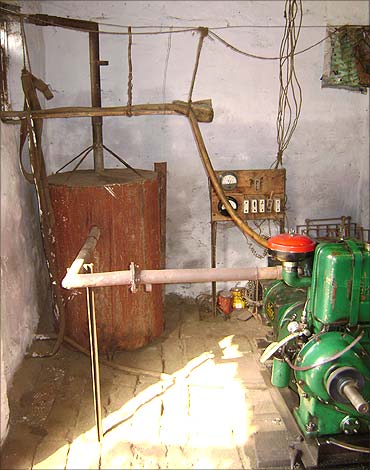 Virendra Kumar has sold about 40 pollution control devices for different types of engines so far. "I charge Rs 2,500 to Rs 10,000 depending on the type of engine. I have got a good response from people. They are pleased with the performance. I am trying to make it as cost-effective as possible. I hope more people come forward to buy this device," says Virendra.

While Virendra takes just 5 per cent as his profit, this innovation can turn out to be very profitable for small factories and households that use generators.

But no company has come forward to help Virendra. "This is a solution that can solve pollution problems across the world in the most cost-efficient manner. Yet, our government does not care to promote these innovations. The science and technology officials in Bihar were also contacted but nothing has happened so far," he says.

He laments the lack of marketing in popularising this device. 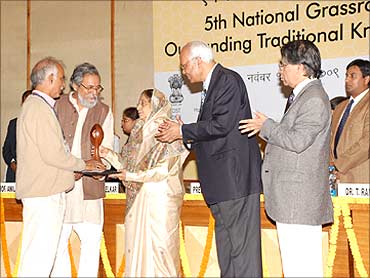 "After I got introduced to the National Innovation Foundation, I have received a lot of exposure," says Virendra.

Getting the patent for this device in 2008 was the crowning glory for him. In 2009, Virendra won the NIF's award for innovation from President Pratibha Patil.

"Last year during the NIF-led Shodh Yatra, many people including foreigners visited my factory and were impressed with my work. The village folks who used to dislike me now praise me," says Virendra.

Unfortunately his father passed away in 2002, so he could not see what his son had achieved despite not joining college for further studies as he had wished.

Virendra has got enquires from some companies but none of them have placed an order so far. If the machinery is put in place, he can meet bulk demand as well, he says. 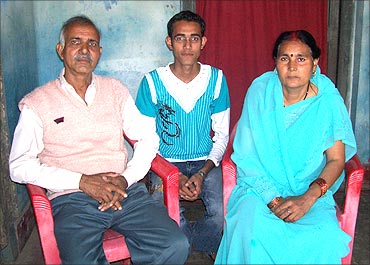 Despite the ups and downs in his life, Virendra Kumar never lost hope. Self confidence helped him stay ahead.

"I have married off my daughters Kaajal and Priti. My younger son, Vivek is studying for BBA. I hope he does well in life. I have not thought about his career. It is up to him. He is too young to take a decision now. It will be good if he is able to take over my work but right now his focus is studies," says Virendra.

Virendra does not regret not studying further. "Whatever I have achieved is through my hard work, determination and perseverance. And I will continue to work hard," he says.

His advice to budding youngsters is never fear failures. "Only if you fail, will you succeed. You should work hard and everything else will fall in place. Don't get discouraged. If there is no risk, there is no gain," he says.