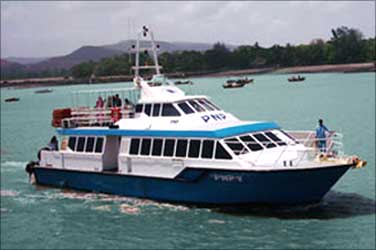 Image: A catamaran that plies between Gateway of India to Alibaug.
Sanjay Jog in Mumbai

Forget the traffic snarls or the crowded local trains. Mumbaikars staying at Borivali could take the waterway and reach Nariman Point in 45 minutes flat while enjoying the Arabian Sea breeze.

This will become a reality, provided you don't mind the extra burden on your wallet. A one-way trip on the 40-km stretch will set you back by Rs 250.

The process has been set in motion with the Maharashtra State Road Development Corporation selecting a consortium led by the Rs 4,000-crore (Rs 40 billion) Pratibha Group for the ambitious passenger water transport project.

It entails an investment of Rs 1,200 crore (Rs 12 billion) and the other consortium members include Kakade Infrastructure and Malaysia-based Inai Kiara. 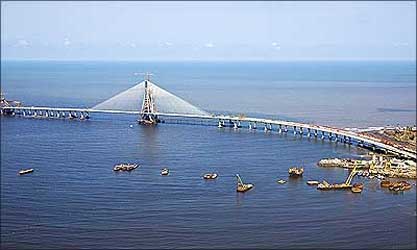 MSRDC officials said the project, which will be developed in four phases on a build-operate-transfer model, will now be referred to the infrastructure committee headed by Maharashtra Chief Minister Ashok Chavan for approval.

Thereafter, a formal letter of intent will be given to Pratibha Industries that proposes to complete the first phase - Nariman Point- Bandra-Varsova - in 22 months to carry 30,000 passengers daily. Subsequent phases would be completed in another 40 months.

The consortium would run the project for 29 years and hand it over to MSRDC.

Rahul Katiyal, Pratibha Group director, said the consortium would bring in a host of global consultants to implement the project.

"The group, which has constructed the tallest building in steel in south central Mumbai and three airport terminals among other infrastructure projects, has adequate project management experience to implement this project within a stipulated time schedule," he said. Katiyal, however, admitted that the immediate challenge is to seek necessary clearances from the Mumbai civic body for the construction of terminal buildings at Nariman Point, Bandra, Varsova, Juhu, Marve and Borivali.

"The financial closure will be done after all clearances are in possession. We do not see any problem in financing the project," said Katiyal.

According to him, efforts will be made to put in place modern vessels, especially all-weather ones which can continue their operations even during the monsoon.

The company will throw in a sweetener by launching door-to-door services whereby passengers will be picked up from their houses to the terminal.