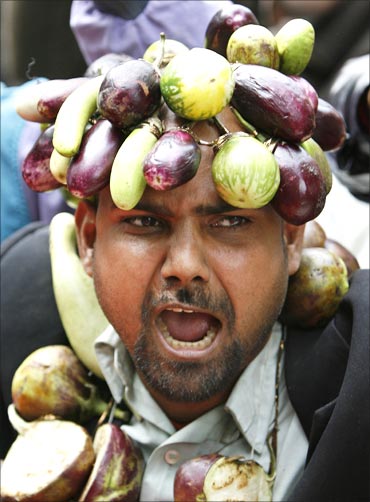 Gadkari led the charge against the Manmohan Singh government, especially on Pawar, saying that the party will intensify the fight against UPA on the issue with a gherao of Parliament on February 22 when the Budget session starts.

He said the government was presiding over a Rs 2.8 lakh crore 'big scandal' by allowing commodity exchange and snatching food from the 'mouths of poor people'. He also invited 'all parties' to fight 'shoulder to shoulder' against the government on the issue of price rise.

"The prices are rising and our agriculture minister is not concerned about it. He is concerned about IPL matches. Is he the civil supplies minister or the cricket minister, I don't know. The prime minister should appoint him as cricket minister," Gadkari said in a veiled reference to Pawar's visit to Shiv Sena chief Bal Thackeray urging him not to disrupt Indian Premier League matches.

"Price rise is like one-day match. The price of sugar has crossed half-century while price of 'daal' crossed century. Pawar is the coach of the team," he said. . . . 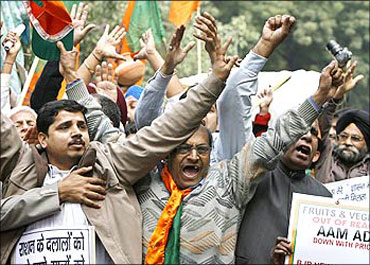 Announcing the nation-wide agitation, Gadkari said 25 lakh (2.5 million) people will reach the capital on February 22 to protest against the government.

"Today's protest is just a trailer and film is still to end. If this situation continues, it will be difficult for UPA ministers to travel on road. We will ensure that," he said.

Gadkari, who was formally elected as BJP president yesterday, also took potshots on Pawar for the NCP mouthpiece's suggestion that people should not take sugar as it increases diabetes.

"There is a big scandal (created) by allowing commodity exchange. The trade is only on paper. In the commodity exchange, 1.22 crore (12.2 million) tonnes of turmeric were sold while the actual delivery was only five per cent of it.

"Similar is the case with other commodities also. It is a big scandal of Rs 2.8 lakh crore. In the name of commodity exchange, the UPA government is looting people," he claimed.

Addressing protestors, Opposition Leader in Lok Sabha Sushma Swaraj said, "The rise in onion prices cost BJP the government in Delhi in 1998. I was the Chief Minister then. It brings tears to my eyes whenever I think about onions. Now everything is very costly and people should not take it lightly." ... 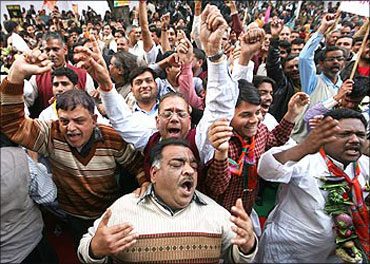 Swaraj said rise in prices was a common feature during all Congress-led governments. "Whenever Congress comes to power, they break the shoulders of common man. They bring the 'bhoot' (ghost) of price rise with them.

"In 1977 during Morarji Desai government, for the first time people came to know that prices could be brought down," she said.

Senior leader Murli Manohar Joshi said if BJP is on warpath, the price rice as well as the 'useless' government will also go.

Joshi said he did not buy the UPA argument that state governments are responsible for the price rise. "The government has no action plan to tackle the issue," he said.

Senior BJP leader Ananth Kumar said, "We will take this agitation against to another level. Price rise is now a big scam. Price of everything is shooting up. Ministers are involved in this. We have to expose this."

BJP has launched a nation-wide campaign against price rise. Gadkari had said in his press conference earlier this week that instead of GDP, food inflation was rising and hinted that such a 'scam' was not possible without the support of politicians in power.

"Prices are rising due to wrong economic policies of the government," he said.