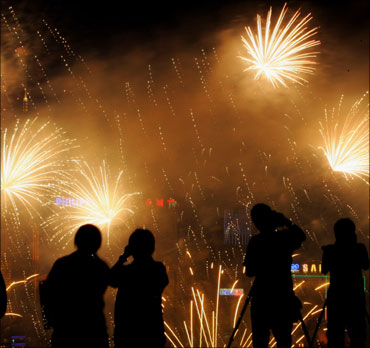 In the first two quarters of the current fiscal year (FY10), Indian companies successfully cut down costs. As a result, they managed to grow net profits. However, investors had a major concern -- sales were not growing, and it would become tough to grow profits after a point.

However, these fears subsided somewhat following the results of the December 2009 quarter. Sales have now picked up and the cost-cutting measures taken earlier are helping companies report higher growth of profit than sales.

About 632 companies with a market cap above Rs 100 crore (Rs 1 billion) have announced their results for Q3FY10. Together, these companies have reported year-on-year (y-o-y) growth of 13.28 per cent and 43.32 per cent in total income and net profit, respectively.

Sequentially, total income and profit grew 6.27 per cent and 3.53 per cent, respectively.

Below, we have focused on the results of companies from five different sectors:

Rising inflationary expectations have forced the Reserve Bank of India (RBI) to adopt a tightening stance. The central bank has raised the cash reserve ratio by 75 basis points.

Though the effects on the banking sector will be seen with a lag, bond markets were signaling tightening of liquidity for a while as yields started to move up. The price of a bond and its yield are inversely related.

As a result, treasury income in the banking space has taken a hit in the last quarter as banks are required to hold 25 per cent of their assets in government bonds. As we go to press, 34 out of 47 listed banks have come out with their numbers for the December 2009 quarter.

Of 34, 19 saw their profits rising y-o-y. Axis Bank and HDFC Bank, both Outlook Money picks, managed to post net profit growth in excess of 30 per cent. However, ICICI Bank saw net profits dropping by about 13 per cent.

Interestingly, Axis Bank and HDFC Bank have also clearly outperformed the two biggest state-owned banks, State Bank of India (SBI) and Punjab National Bank (PNB), in terms of net interest margin. Although the expectations of rising rates may take away the sector's sheen in the next few quarters, we expect both Axis Bank and HDFC Bank to continue to perform well and maintain a hold on both these counters. Click NEXT to check out other shining sectors. . . 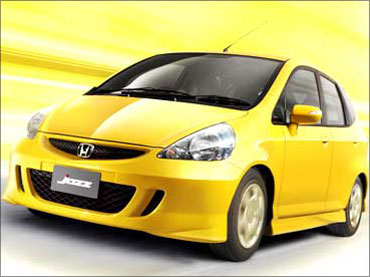 The revival in domestic demand in the last few quarters has been favourable for automobile companies.

Hero Honda Motors, an Outlook Money pick, reported better-than-expected numbers for Q3FY10. Total turnover and net profit saw growth of 32.82 per cent and 78.34 per cent y-o-y, respectively. Hero Honda kept raw material costs under check. Its EBIDTA margin expanded from 14.47 per cent in Q3FY09 to 17.27 per cent in the last quarter. Margins were stable on a sequential basis.

A similarity in the results of most auto companies was that toplines were boosted by domestic demand while bottom lines expanded on low raw material costs. This trend, however, is not expected to last long. Though leaders like Hero Honda and Maruti Suzuki should be able to grow sales, bottomline growth is likely to be smothered by rising raw material costs. . . . Outlook Money tracks most of the companies in the Bombay Stock Exchange's (BSE) FMCG index. Though rising commodity prices have been a concern, the Q3FY10 results do not indicate any sign of it. Most companies have reported healthy growth.

ITC, an Outlook Money pick, reported robust growth. Total income and net profit grew 19.27 per cent and 26.67 per cent y-o-y, respectively. Strong numbers came from both the core business (cigarettes) and non-core businesses (such as agro-products and paper boards).

With the economic slowdown withdrawing its claws, there is widespread belief that things are going to change for the better. The last quarter numbers cement this belief: sales have picked up, and healthy bottomline figures are no more solely dependent on cost-cutting drives. Some of the companies which had slipped into the red are now recovering lost ground.

Hindustan Unilever (HUL), however, disappointed the market somewhat due to its subdued growth. The company's total income and net profit grew 4.55 per cent and 5.42 per cent y-o-y, respectively, during Q3FY10. Although advertisement expenses on product launches impacted its operating margin, those promotions should boost its sales in Q4FY10.

Colgate-Palmolive (India) and Procter & Gamble Hygiene & Healthcare (PGHH), the other two Outlook Money favourites in the FMCG sector, posted strong numbers. Colgate's total income and net profit grew 17.26 per cent and 49.67 per cent, respectively, and corresponding figures for PGHH grew 20 per cent and 58 per cent. . . . 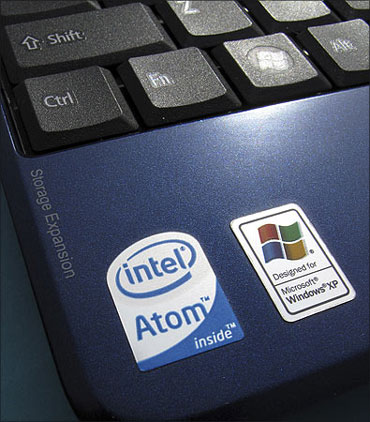 Image: The tide seems to be turning in favour of IT companies.
Photographs: Reuters

The sector has been surrounded by a fair amount of uncertainty in the last few quarters. That is not only because it derived the chunk of its revenues from the developed markets, but also because the concentration of its client portfolio is skewed in favour of banking and financial services -- the epicentre of the crisis.

All the frontline companies in the sector posted higher revenues and profits on a sequential basis. However, what has really boosted the market sentiment is the fact that managements sounded much more confident about the future this time around.

The other highlight for the sector was the renewed vigour of the banking, financial services and insurance (BFSI) segment. For example, Infosys got 14 out of its 32 new clients from this space. IT major Tata Consultancy Services saw revenues going up by 2.8 per cent sequentially and 5.11 per cent y-o-y.

Similarly, Wipro posted an impressive show with revenues up 5 per cent and net profits up 21 per cent on a y-o-y basis.

Another good sign for the sector was margin expansion. Margins, however, can come under pressure if the rupee appreciates sharply. In an interview with Outlook Money, V. Balakrishnan, chief financial officer, Infosys, said that his company can absorb the appreciation if it is gradual. Therefore, investors in the sector should keep an eye out for exchange rate.

Lately, some concerns have risen due to the left turn taken by the Obama administration on outsourcing. The view in India, however, is that such moves will not affect Indian companies. . . . 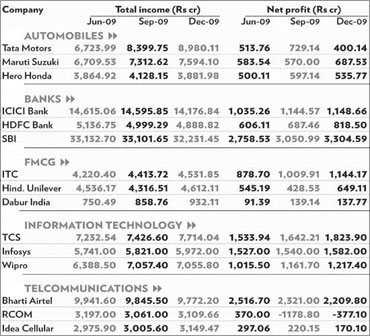 Bharti Airtel's Q3FY10 headline numbers look unattractive. Its total revenue and profit declined sequentially by 0.74 per cent and 5.03 per cent, respectively. The average rate per minute is down to 52 paisa compared to 56 paisa a quarter ago and 64 paisa a year ago. Offerings by new entrants have resulted in higher churning in pre-paid customers: from 2.9 per cent in Q3FY09 to 6.5 per cent in Q3FY10.

Despite these issues, Bharti stands strong on operational parameters. Customer addition to its network is strong (sequential growth of 7.42 per cent) and the churn in post-paid connections remains low at 1 per cent.

Its non-mobile businesses, such as telemedia, enterprise services and passive infrastructure services, are on a strong footing. The company's share in the overall industry revenue remains unaffected. Also, inorganic expansion through mergers and acquisitions is on the cards.

Bharti recently acquired a controlling stake in Warid Telecom of Bangladesh that will give it access to the country's underpenetrated market. To support such acquisitions, it has a strong operating cash flow.

Idea Cellular posted q-o-q total revenue growth of 5.72 per cent. However, this growth was driven by attractive, though unsustainable, low tariffs. The pressure on margins is evident from its bottomline, which fell 20 per cent sequentially.