When the world's first commercial magnetic levitation railway -- maglev, for short -- went into service in Shanghai in January 2004, connecting its downtown district with the international airport in Pudong, even many Chinese doubted the wisdom of such extravagance.

The authorities had spent $1.2 billion to build the 30-km, 431-km-per-hour connection so that passengers could commute to and from the airport in 7 minutes and 20 seconds to be precise. People wondered: Is this kind of time saving really necessary?

Six years on, maglev isn't a debate anymore. It's a trend that's clearly catching. Last month, South Korea tested a driverless maglev train at the Incheon International Airport and hopes to have a 6.1-km track ready there by 2013.

The government is seriously looking to use the technology in other places as well to improve mass transit services. 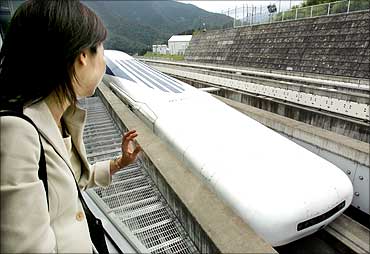 Image: A Japanese woman looks at Central Japan Railway Co.'s Maglev train, which is levitated and propelled by magnetic forces, at an 18.4 kilometre test track of in Tsuru, west of Tokyo.
Photographs: Yuriko Nakao/Reuters

Also last month, the US transportation secretary Ray LaHood went to Japan to ride a test maglev train operated by the Central Japan Railway on an 18-km track in Tsuru, west of Tokyo.

Japan has developed its own maglev technology that it wants to sell to other countries and also employ at home to build an extensive domestic maglev network. The plan is for a Tokyo-Nagoya service by 2027 and Tokyo-Osaka by 2045.

China itself has bigger maglev plans. This September, preliminary work starts on a proposed 22-km maglev subway line in Beijing, to be fully operational by 2014. Shanghai is keen to extend the Pudong maglev to its other airport, Hongqiao, and then all the way to Hangzhou, capital of Zhejiang province, more than 100 km to the southwest.

The main attraction of the maglev train is its technology. The fact that trains don't run on wheels and float in air over guideways using the basic principles of magnets means there is virtually no friction and journeys are smoother, quieter, safer, and speedier. Image: A labourer cleans the stairs beside a China Railway High-speed (CRH) train preparing for the operation ceremony from Wuhan to Guangzhou in Wuhan, Hubei province.
Photographs: China Daily/Reuters

Its only disadvantage is its higher cost relative to conventional high-speed railways. That's why, like the Japanese, the Chinese are currently engaged in developing their own maglev technology and are aiming to manufacture the trains themselves for the Beijing line.

They expect to bring down the cost to $35.7 million per km, against $40 million per km incurred on the Shanghai line. If further cuts can be achieved, we are going to see more cities falling for maglev to build up or upgrade their mass transit systems.

Since speed is the name of the game, a cost-competitive maglev is a better future alternative to wheel-based bullets. It's more than likely that Hong Kong will look at maglev for its proposed $8.6 billion hook-up with the Chinese high-speed railway network.

Even Indonesia is talking maglev for a 350-km high-speed connection between Jakarta and Bandung. A whole new market for high-speed conveyance is thus opening up, and Japan and China are cranking up to compete with the Germans and the French for a share of it. 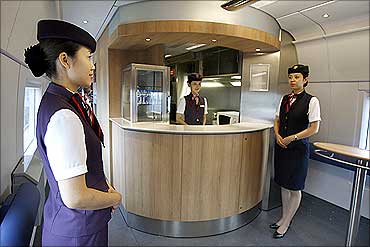 The United States, for example, has 13 regional high-speed rail projects in mind, including possible maglev links between Washington and Baltimore and between Tampa and Miami in Florida.

For China, in particular, speed is everything and time saved means opportunities gained. A key high-speed (380 km-per-hour) railway between Beijing and Shanghai is due to open in 2011, bringing the two cities within four hours of each other, against ten hours now.

By end-2012, more than 9,000 km of new high-speed lines are supposed to be in place, supporting speeds between 200 kph and 350 kph. Slower services are being phased out, even though they are cheaper and people don't mind having them.

By 2020, China's total high-speed mileage is to go up to 30,000 km. With that kind of a goal, it's not difficult to understand why China is so interested in having a maglev technology of its own. 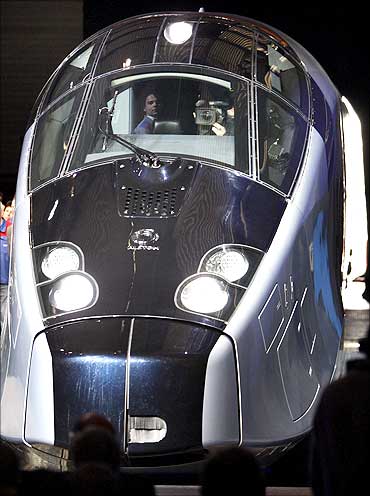 It's called the Evacuated Tube Transport, or ETT, and works like this: Instead of in the open, maglev tracks are enclosed in parallel tubes (one for each direction) from which all air is permanently pumped out (evacuated).

Pressurised passenger capsules, comparable to cabins of private business jets, hurtle through the tubes without any resistance, as if through space, at a minimum speed of 4,000 kph and using less than a tenth of the energy consumed by an aeroplane.

Crazy? Maybe to us, who think an 85 kph train is a Duranto. But the fact that ETT has already infiltrated the Chinese mind leaves no doubt about the direction they want to take and how far into the future they are prepared to look.