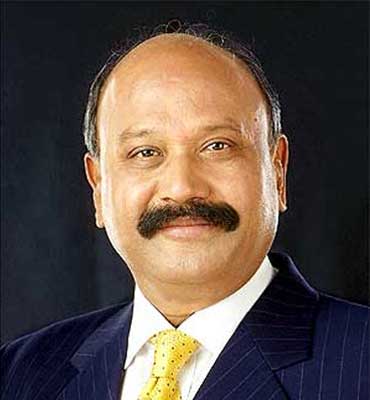 After Saturday's grand opening of T3 and before getting down to the nitty-gritty of closing down Delhi's old international airport terminal, G M Rao sits down for pesarattu, coffee and conversation

I invite him to join me for breakfast or lunch at my favourite restaurant, the canteen at New Delhi's Andhra Pradesh Bhawan! A perfect location for a conversation between two Telugus. He sends an SMS back, "Please come home, I will give good south Indian breakfast"!  I yield without resistance.

As I step into the Golf Links home of Andhra's newest star on India's business firmament, Grandhi Mallikarjuna Rao, chairman, GMR Group, the delightful smell of Andhra spices greets me.

I pay obeisance to good health by quickly tucking in some papaya before greedily eyeing the pesarattu - which restaurants in Delhi call an 'Andhra dosa' -- made with green moong dal. It doesn't have as many green chillies as I would have liked, but it is cooked well and the ginger pickle is just perfect. 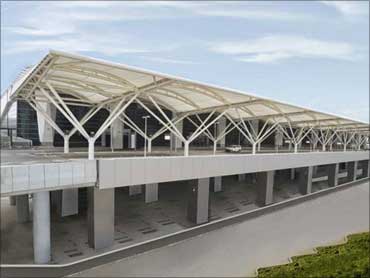 At 8.30 on Monday morning, 'GMR' looks relaxed and fresh, considering it hasn't been even 48 hours since the gala opening of his life's magnum opus, the new terminal at Indira Gandhi International Airport, T3.

"Today at noon we begin work on the transition process," he tells me. He is worried about "teething troubles", and would have preferred this conversation a week after the airport was up and running.

GMR is a stickler for detail and gives innumerable examples of how he always keeps a close eye on quality control, on technical processes, on the nitty-gritty -- be it in the sugar mill he runs in his home district of Srikakulam in Andhra Pradesh or the power plant on a barge in Mangalore, or the runway at T3.

So, where does this attention to detail come from? Clearly, it is in the genes of a man born into a family of gold merchants. Every tola counts! GMR is a Komati -- coastal Andhra's traditional merchant-moneylender caste.

When he failed his 10th class examination, his father suggested that he should forget about further studies, sit next to him and run the family's traditional gold business.

After two years of doing that, GMR implored his mother to get his father to send him back to school. He was missing the fun. "We had a gang of students who would get on to our bicycles and go away to watch movies. I would have seen every movie that was released at the time."

Returning to school, he gets a first class in the pre-university exam and another first at Waltair's engineering college. With the pesarattu done, the upma arrives. In some south Indian restaurants in Delhi, the upma is tucked into the pesarattu -- the upma's ghee dowsing the fire of the pesarattu's green chilly and ginger. But Mr Rao's cook serves them separately. "My wife has trained the cook," he tells me, noting my approval!

After his father's passing away, GMR moved from the family's gold and jute businesses in Srikakulam and worked briefly for A P Paper Mills in Rajahmundhry, where he recalls observing closely how an "experienced Marwari" businessman ran a company.

Handling the jute business gave him insights into managing diverse stakeholders. Seeking job security, like so many of his friends at the time, he joined the state's public works department as an executive engineer, gaining experience in infrastructure-building on the Vamsadhara project.

From gold and jute and through two salaried jobs, one in the private sector and another in government, GMR arrived at his first foray in manufacturing -- producing cotton ear buds! A brewery he started in partnership with Shaw Wallace, was sold off to Vijay Mallya. There was a sugar mill, which was one of the early mills to be conceptualised as a composite unit producing sugar, ethanol and bagasse for co-generation, which was sold to EID Parry.

From agro-business, GMR moved into finance, buying up shares in the Vysya Bank, of which he then became chairman. At Vysya Bank, his network widened into Karnataka and Tamil Nadu. He recalls with gratitude the "support" he got from "the vysya community in the three states."

There was a small-time insurance business on the side that was later sold to the Rahejas. The big time came with 1991. "Till then I was operating in the old 'licence-permit raj' world," he says. There was not much growth. "In 1991, I was one of the 'children of liberalisation', as Prime Minister Manmohan Singh once put it." He set up power plants in Tamil Nadu and Karnataka.

GMR speaks at length, and with pride, about his focus on technology and innovation. He was among the first few to diversify from sugar into ethanol and power, using the latest technologies.

His Chennai plant was among the first to use sewage as a coolant, thus saving on water consumption. His Mangalore power plant was the first to be built on a barge, a technology he first saw in Macau. At Delhi airport, he has used a range of cutting-edge technologies and he goes into great detail on each.

The Golden Quadrilateral opened up new opportunities for road construction. With more than a score different businesses, having built power plants and roads, he saw no reason why he shouldn't bid for an airport project.

"What experience do you have," the then Andhra Pradesh chief minister Chandrababu Naidu asked him. Says GMR sheepishly, "I thought an airport was nothing more than a runway and a building! I had built roads and factories, so I told Babu I can build an airport!" 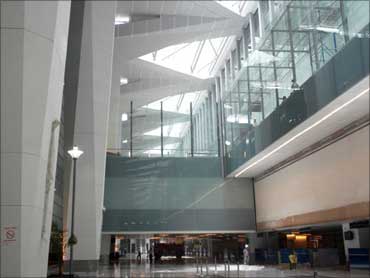 At this point the pongal arrives -- a gesture now to his pan-south Indian branches, as opposed to his Andhra roots -- and I decide I have eaten enough for the morning. I had two pesarattus, to his one. At 60, GMR looks young and in good health.

When he won the bid for the Hyderabad airport, beating L&T, GMR was not quite sure how to go about it. So he did what he now regards as the most important part of an entrepreneur's home-work -- he consulted experts, and the best ones in the business.

He invested time, energy and money in learning, and having his team learn, from experts in airport construction and management from Germany, Singapore and Malaysia.

"I then discovered that an airport is about people, not buildings. An airport is a very complex system," he says. That is why before throwing open the Delhi airport to the public he is testing it with "dummy passengers" - 3,000 men and women, each paid Rs 175 to come and play act, testing everything from baggage handling to security.

Once again, his obsession with technology is at play. He talks at length and in great detail about the security systems, the air traffic control and baggage-handling systems, the materials used for construction of the tarmac to prevent cracks.

He has hired the best brains in the business, he says, from around the world to check out if he is doing things right.

He is proud about two managerial ideas he believes in -- first, the idea of a "family constitution". At Vysya Bank, he paid close attention to defaulting business borrowers. "Almost every one of our NPAs owed its failure to family problems. Few business families have not been hurt by internal divisions," he says. 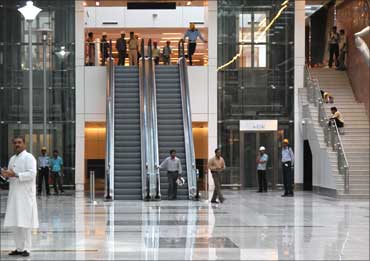 He asks for a book he has just finished reading, Managing for the Long Run: Lessons in Competitive Advantage from Great Family Businesses (Harvard Business School Press, 2005). A heavily marked copy comes from the bedroom and he signs it and gifts it to me, urging me to read it.

Managing the family is an important part of managing family businesses, he says, and so his brothers and children have drawn up a family constitution aimed at resolving internal issues and ensuring they don't hurt a rapidly growing business empire.

The second idea is more commonplace -- the importance of "shared values" within the organisation. His "cherished values" are: humility, team-work, willingness to learn, ensuring delivery, respect for individuals, and being socially responsible.

Who are his heroes, I ask, sipping a cup of piping hot south Indian filter coffee, with Delhi's first monsoon rain making it even more pleasurable. Pat comes the reply, Dhirubhai Ambani and J R D Tata -- the former for his "daring", the latter for his "institution building". You need both qualities to succeed and leave something behind, he adds.

I am taking off this week from the old airport, I tell him as I leave, I hope to return and arrive at yours! He sees me out with a big smile!