Sign in  |  Create a Rediffmail account
Rediff.com  » Business » That old rupee note in your wallet could make you rich 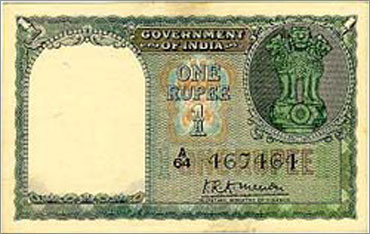 Image: A Rupee 1 currency note that was in circulation in 1950.
Photographs: Courtesy, Reserve Bank of India Masoom Gupte in Mumbai

Old is gold. More so, if it is an old rupee note.

Ask Mehraj Quraishi. Two years back, Quraishi, a trader in old coins and notes, purchased 30 one-rupee notes -- the first ones printed by the government after Independence -- bearing the signature of the then finance secretary of India, K R K Menon. He paid Rs 1,350 for each note.

But when Quraishi wanted a few more of these notes a few days ago, he had to dole out Rs 10,000 for each -- a 640 per cent increase in value in just over two years, something not many investment avenues can boast of.

There's more to it. Some of the Re 1 notes printed in 1964, bearing the signature of the then finance secretary, S Bhoothalingam, are at present available on ebay.com for Rs 25,500 each.

However, all old currency notes do not appreciate as rapidly in value. The availability of the note in the market is the main factor. For example: the Re 1 notes printed in December 1964 and signed by Bhoothalingam are very rare, but other notes signed by him in the subsequent months might be available in the market and may not fetch the same value.

Jayesh Gala, a collector and dealer of notes and coins, has some tips to help customers identify rare notes. "Check the period for which a particular RBI governor has been in office. If it is a short period, chances are that notes bearing his signature will be few and hence would command a high price."

The physical state of the note will also determine what price it can fetch. An uncirculated note, or UNC as it is known in numismatic parlance, will command a higher price compared to the used ones.

Click NEXT to find out how to assess the value of your note. . . 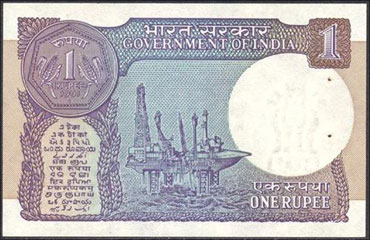 Collectors are interested not only in currency notes which are out of circulation but also those which are currently in use. Of course, they must have some special feature to be of interest to a collector.

Like the Rs 10 'star' note, or replacement note with former finance secretary and present RBI Governor D Subbarao's signature and a series number 000001. This note was bought for Rs 50,000 by Kishore Jhunjhunwala, a numismatist.

But how would you know if the Rs 10 note in your wallet can fetch you a fortune? Here are a few parameters that may help you assess the value of your note.

Each note bears a unique series number. For example: your note may have the following number printed on it: 01A 124578. Here, 'A' is the prefix letter and 124578 is the series number. You will also find a letter in the background of the series number, known as the inset letter, that identifies the mint it has been printed in. 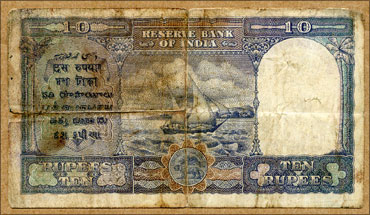 So next time you come across a note with a 'fancy number', don't be in a rush to spend it. It may be worth much more than its face value.

Usually, people are eager to palm off a misprinted note to an unsuspecting person. But if you find yourself in a similar position, don't rush to rid yourself of the error note.

Error notes are notes that are misprinted by the RBI and are supposed to be destroyed. But somehow they find their way into the market and in the hands of money changers and collectors.

Again, the value of an error note cannot be determined but it is certain that it will fetch you a decent amount. 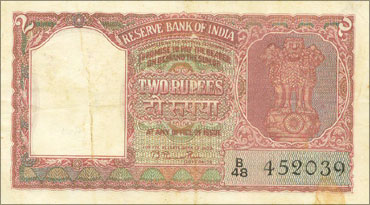 These notes are also known as replacement notes. During the printing of a certain series of notes, one of the notes in the bundle could be misprinted. The note which replaces the misprinted one in the bundle will not be serially numbered like the rest.

To identify such a note, a star sign is inserted in the number panel between the prefix letter and the series number.

"Such notes are rarely seen in circulation as they are in great demand from collectors," says Arun Sanghvi, a money changer.

Not surprising that even an ordinary Rs 10 star note with no fancy number or a particular governor's signature can be sold to a money changer for Rs 30. If you ever come across a star note, know that you are richer by a few rupees.

Moral of the lesson: do keep a close watch on all your notes henceforth. The value of the Rs 10 note in your wallet may actually be worth a few extra zeroes.