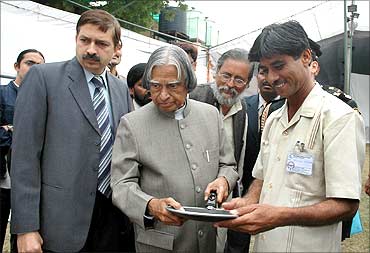 Image: Mansukhbhai Prajapati with APJ Abdul Kalam.
Manu A B in Mumbai

Former President APJ Abdul Kalam called him a 'true scientist'. Mitticool, a clay refrigerator that works without electricity had turned the world's attention to its creator Mansukhbhai Prajapati, a craftsman based in Gujarat.

Presenting the national award to Mansukhbhai in 2009, President Pratibha Patil appreciated his work and asked him for a Mitticool.

Scientists and journalists from across the world have visited his unit to see how he makes eco-friendly products at a low cost.

A school drop-out, he has achieved a feat that many in the world envy today.  The simple and unassuming Mansukhbhai is not keen on money. His ambition is to make more low-cost and eco-friendly products for the masses.

"A good majority of Indians cannot buy a fridge as it is expensive. Besides this, electricity bills and maintenance cost is also high. Mitticool is an eco-friendly product which has no maintenance costs. It also retains the original taste of vegetables, says Mansukhbhai who has sold 1500 units so far.

"I failed in the tenth standard. But I was not disappointed as I knew that I was capable of making something new," says Mansukhbhai who holds a patent for Mitticool.

People who considered him as incapable, now look up to him. They say, "you are the pride of our community!"

He has been popularising earthen products since 1988. The only drawback for him is the lack of stores to sell them.

The products are mostly available in Gujarat and in some stores in Mumbai and Pune only. Besides, the low-cost fridge, he has developed a water filter, non-stick tava and a pressure cooker all made of clay. And he has many more innovative ideas. 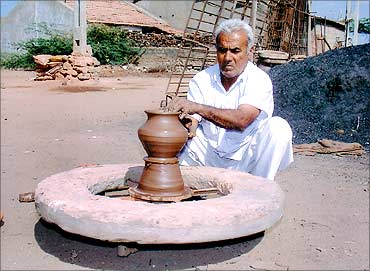 Pottery has been the Prajapati family's traditional business. Mansukhbhai's family belonged to Morbi in Rajkot district.

However, his father gave up the profession as it was not getting them any money. It was all hard work without much gain. He being the only son was sent to school on the hope that he would do well in academics and get a good life.

However, he disappointed them when he failed tenth standard. To make matters worse, he refused to take up construction work which his father had started doing. He was however forced to do all sorts of odd jobs. He even injured an eye working in a brick factory.

"I was fed up. I wanted to start my own factory. But there was no way I could do it without resources. I joined a tile factory. I worked there for sometime. This was a turning point for me," he says.

He found that tiles were manufactured at a fast pace with a machine which was quite expensive. 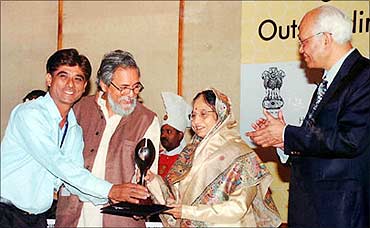 However, Mansukhbhai knew he needed to think differently and make innovative products. He took a loan of Rs 30,000 and started a small factory.

At the age of 18, he made a machine, which could make 600 tavas a day instead of 100 tavas they used to make manually. This gave him lot of confidence to explore and innovate.

He got the idea to make a machine for about Rs 4,000, which could help him manufacture more tavas than was being done manually. His initiative to restart the pottery business was not taken positively. But he went ahead despite opposition.

"Now all my family members actively take part in the work. They are very happy with what I have achieved so far. I owe a lot to my family. I am happy that my elder son is doing an engineering course in ceramic engineering." 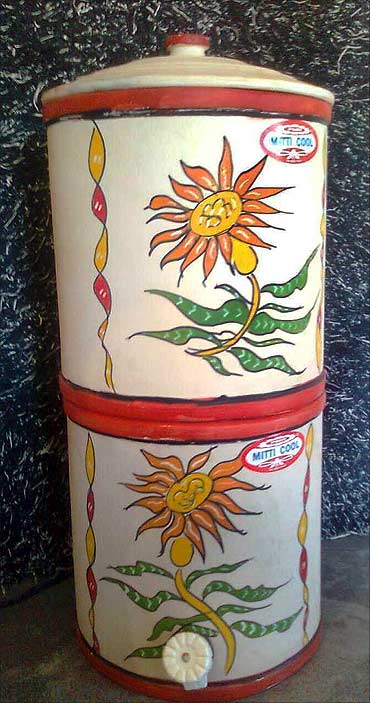 His only regret is that because of poor marketing his products are not reaching out to many people. He, however, makes it a point to parcel products to people who are willing to deposit money in his bank account.

It was a great beginning. "I also made a clay mixing machine. Till then, clay used to be missed with the legs. This machine also reduced the workload and improved the efficiency."

By 1995, he realised the need to build a water filter. The market had steel filters which were not very efficient. After months of research and hard work, he built a water filter.

Luck favoured him too. "A person who had settled in Nairobi heard about my project and approached me for 500 units. I was excited. I sold it making Rs 100,000 on the first sale. It was a good start. The product I developed was sold in Nairobi even before it sold in India," he says. The water filters priced at Rs 350 to 400 are quite popular. 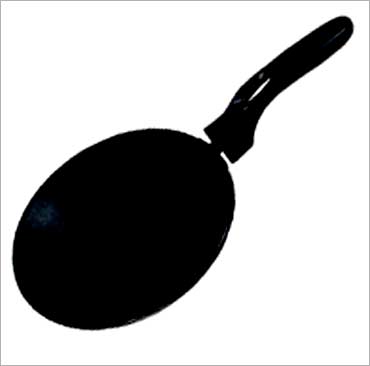 Later in 2005, he started the non-stick tava (pan) business. "My wife could not buy a non-stick tava as it was costly. So I thought many people would be facing the same problem.

That's when I designed the non-stick tavas, priced between Rs 50-100." It took him an year to research and experiment -- testing the material for the non stick coating etc. The food grade test for the pan was done by Tata Chemicals in Mumbai.

Mansukhbhai has sold more than 50,000 tavas. He had to make thousands of tavas before he made the perfect one.

He thanks the Gujarat Grassroots Innovation Network and professors at Indian Institute of Management, Ahmedabad and the National Innovation Foundation, who extended their help in the form of grant and guidance for getting the patent, making the packing box and lab testing of products. 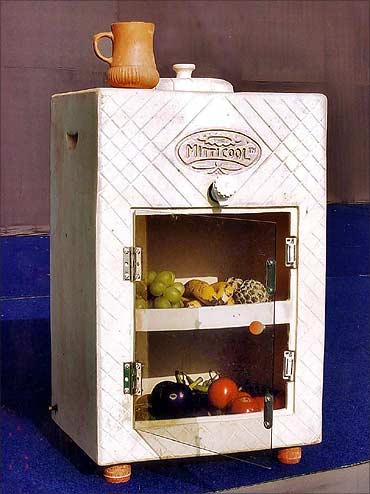 "When a foreign delegation came to meet me, we cooked food in clay vessels and served them in clay plates. They were very impressed and happy with our healthy approach."

In 2009, he made the clay pressure cooker. "It comes with a whistle too," he remarks. About 500 cookers have been sold so far.

During the 2001 earthquake, all earthen pots were broken. Some people told me the poor people's refrigerators are broken. They referred to the 'matkas'(pots) as refrigerators.

It struck me then that I must try to make a fridge for those who cannot afford to buy a fridge. The patent winning Mitticool has been the most challenging product for him. It needed a lot of experimenting. He started work on it in 2001, the product was finally ready by 2004.

It took him almost four years of hard labour and an investment of about Rs 10 lakh (Rs 1 million). An engineer who saw the fridge asked him to make 100 units. This was a great morale booster.

He had to take a loan of about Rs 10 lakh (Rs 1 million) for the Mitticool project. He is still repaying the debt. 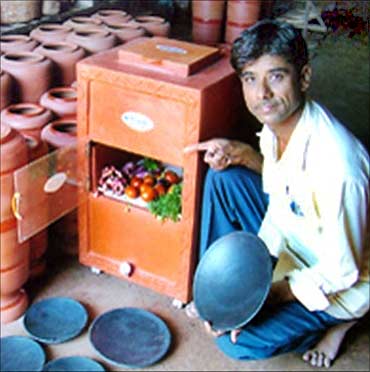 Image: Mansukhbhai with his products.

It takes 10 people to make a fridge in one day. Made from clay, the refrigerator can store water, fruits, vegetables for 8 days and milk for one day.

The upper part of the refrigerator stores water, while the bottom unit has space for fruits, vegetables and milk.
At present, he sells the clay fridges at Rs 2,500, at his unit. Most of the sales outside Gujarat are done during exhibitions.

In Mumbai and Pune, some of his products are available. Every year he takes part at the international trade fair in New Delhi in a bid to popularise the products. 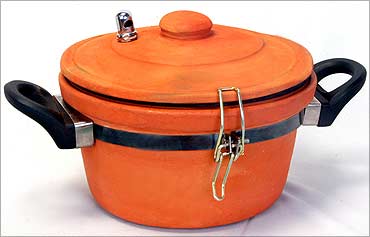 "I have also been getting lot of calls from the US. It is amazing to see so much interest from abroad," he says happily.

Mitticool was showcased at a conference organised by the Centre for India and Global Business, Judge Business School, University of Cambridge, UK in May 2009. Bosch and Siemens Hausger te (BSH), Germany, has also showed interest in Mitticool.

About 20 units of Mitticool have been exported to the UK, Africa and Nairobi. He has now been invited to Africa to set up a unit there. "I have not committed anything but the most important thing is the soil. Gujarat has the best soil for pottery," he points out. 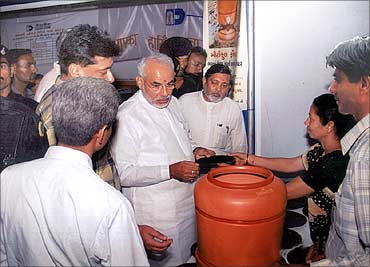 The recognition Mansukhbhai had never imagined that his products would win him so many accolades.

Nothing can be as rewarding as such compliments. Money is nothing compared to people's appreciation. "Gujarat Chief Minister Narendra Modi knows me by my name. He has been very supportive and told me to approach him for any problem," he says.

He says well-known activist and performer Mallika Sarabhai recently remarked that he should be made Gujarat's brand ambassador. 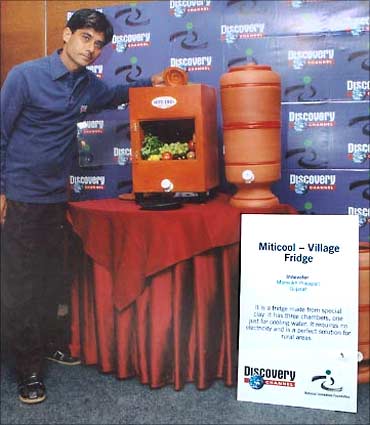 Image: Mansukhbhai to be on Discovery Channel.

He also enjoyed doing a shooting for a programme which will be aired on Discovery Channel.

"A team from the Discovery Channel took me around India. I enjoyed the trip. It was a wonderful experience. I had never imagined that I would ever be able to fly in a plane," Mansukhbhai says.

The media has been very supportive. It feels great to see my products on television channels, newspapers etc. 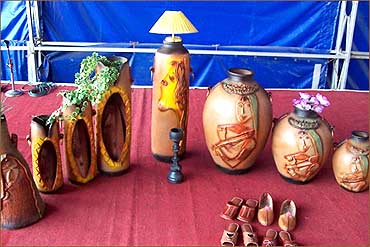 His goal Mansukhbhai wants every Indian to have access to his products. There is very little awareness about the products though I try to participate in 2-3 exhibitions every year.

"I wish I could strike a deal with a retail store like Big Bazaar to get better visibility. I am sure if more people use our products, it will create more awareness about such low-cost products that are a healthy and cost effective alternative in the long run."

His advice to budding entrepreneurs is: Never think about failures. Never give up.

Put your heart and soul into what you want to do. Always follow the right path and have patience. Keep working hard.