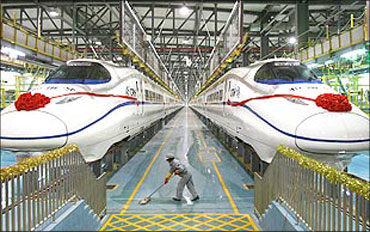 With an audacious investment programme, Chinese Railway, like the country's most dramatic burst of wealth creation, inspires awe as much as envy.

The Chinese railways trailed Indian Railways technologically until the 1980s. In fact, even in 1990, its 24,800-km core network with an annual density of 30 million gross tonnes or more had largely 50 kg/m and 43 kg/m rails; as many as 55 per cent of the wagons were with plain bearings.

Until 1980, steam locomotive continued to remain its mainstay, carrying 76 per cent of its traffic. Today, Indian Railway, lost in shibboleths of systematic self-destruction, lags way behind Chinese Railway, and has no tangible strategy for growth.

On the other hand, Chinese Railway, now the world's second largest freight railway system and the largest passenger system, has by far the highest traffic density (passenger-km and tonne-km per km of line) -- it is 10.5 times the world average. Its output per locomotive, per freight car, per passenger coach is among the highest. Chinese Railway's priority development plans have centred on high technology and a judicious mix of traffic routes for passenger trains running at 200 kmph and freight trains at 120 kmph.

Travel time has been reduced by increasing service speeds and reducing train stops. Between 1997 and 2007, Chinese Railway carried out six stages of 'speed raising': maximum train speed that was generally around 80-100 kmph in 1991 has gradually been raised to 160-200 kmph on popular passenger corridors.

The first 300-kmph electric multiple unit (EMU) train set was inaugurated in August 2008 between Beijing and Tianjin. CR is currently constructing 350 kmph passenger dedicated lines (PDLs). The combined length of PDLs by 2020 will be 16,000 route km; another 35 mixed traffic lines will be equipped to operate at 200-350 kmph.

Chinese Railway is busy developing its capacity and quality for freight and passenger traffic in line with the economy's astounding growth. 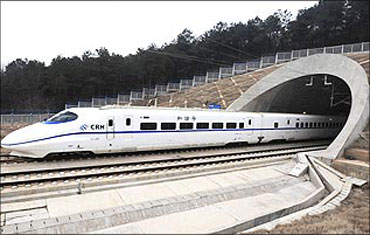 As Chinese Railway is poised to have the largest high-speed rail network worldwide, it will have a similar seminal infrastructure for heavy-haul freight transportation.

The principles underpinning the Mid-to-Long Range Railway Network Plan (MLRNP), 2003, approved for CR by the State Council, include: Coordination of rail development with that of other transport modes; separation of passenger and freight transport on constrained busy trunk lines to increase capacity and improve service; development of inter-city fast passenger networks; expansion of the rail network to support and encourage sustainable economic development, regional development and national defence; raising the local content of railway equipment and promotion of local railway manufacturing.

In 1991, the Chinese government enacted a Railway Law, which gave the ministry of railways overall control of policy, technical standards, planning, investment and finance, leaving just the day-to-day management and delivery of rail transport services and infrastructure to the regional railway administrations (RRAs).

For raising capital for new constructions, a surcharge was applied to all freight traffic in 1990. A second surcharge was introduced in 1993 for freight moving on electrified lines and was used for extending electrification over the network.

In 2005, China opted for public-private partnerships for new constructions, including the PDLs. Local railways in China came into being in 1960 essentially as feeder lines financed by respective local governments. Joint venture railways, established first in the 1990s, account for more than 50 per cent of the new constructions. 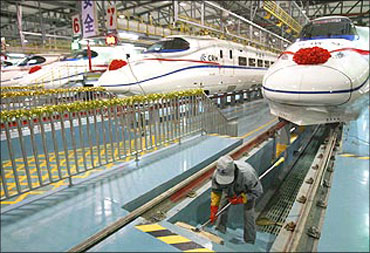 Chinese Railway's track structure is being constantly upgraded: PDLs will all have ballastless track and the heavy-haul high-density Daqin line, originally laid with jointed 60 kg/m rail in 25m lengths on the east-bound loaded track, is being replaced by continuously welded 75 kg/m rail on 2,600-2,700 mm long sleepers laid at 1,840 per km.

Four large equipment maintenance bases are due to be completed by 2013, one each at Beijing, Shanghai, Wuhan and Guangzhou. These will be aided by 35 modern satellite depots across the network. Concomitantly, several state-of-the-art signalling and communication systems have been planned.

China has emerged as a strong manufacturer of railway equipment as much as a burgeoning market for it. By 2020, China will potentially be the global leader in rail technology.

Technology transfer from Japanese and European companies has enabled China's railway supply industry to acquire the knowhow to build rolling stock ranging from 350 kmph EMUs to heavy-haul locomotives. Matching advancements have been made in track and signalling technologies.

On dedicated heavy haul corridors, such as Daqin line, wagons of aluminium or stainless steel body with 25 tonne axle load, fitted with rotary couplers, and for up to 120 kmph operation, are being introduced progressively. The whole approach has been pragmatic coupled with bold initiatives, clarity, and continuity. Major rationalisation measures initiated by Chinese Railway have entailed massive investments as well as drastic disinvestments.

Many railway stations with low volume of freight have been closed; short distance passenger traffic has been actively discouraged to release capacity for longer distance rail travel.

In an important reform in 2005, a whole tier in the Chinese Railway management structure, the sub-administration level of regional administration (akin to divisions on IR) was abolished, leaving RRAs with a direct line of management to depots, stations and yards.

By 2005, Chinese Railway transferred some 900 schools and colleges and 400 hospitals to local governments. Surplus staff not directly involved in railway operations were put on the RRA rolls in what are called diversified economy companies set up in 1985.