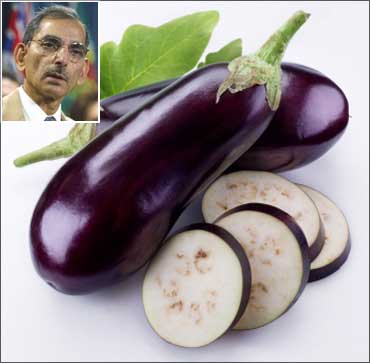 Dr Shiv Chopra, the 75-year-old, Canada-based microbiologist and well known human rights activist, was in India recently in connection with the release of his latest book, Corrupt To The Core - Memoirs Of A Health Canada Whistleblower, which is about how corruption in government endangers public food supply.

In the last 49 years that he has been living in Canada, Chopra and other fellow scientists have waged many a battle against successive Canadian federal ministries of health and helped protect food supply. One of his major successes was the banning of the Bovine Growth Hormone in Canada and in the European Union in 1999.

According to him, the five substances that are unsafe are hormones, antibiotics, slaughterhouse waste, genetically modified organisms and pesticides.

In an interview with rediff.com, Chopra talks about the frightening scenarios ahead for Indian agriculture, the dangers of GM seeds and food safety.

You have spoken at various platforms all over the world against genetically modified crops. Are they harmful to human beings, animals and other plants?

There is evidence that they are harmful. GMOs (genetically modified organisms), first of all, do not bring any benefit to either health or the economy in terms of increasing production.

Those who support use of GMO say they increase production, but they don't say that it is only because pesticides are attached to them. They kill insects which normally share some of nature's bounty.

You create seeds that are genetically dependent on some kind of pesticide and that pesticide will kill any kind of life.

What they do not want to tell is what has been destroyed and left in the plant. When you kill plants, on the plant there are insects, worms and nitrogen fixing bacteria; all that gets destroyed. This is happening year after year. If one herbicide stops working, they come up with another one. So, it is bad for the soil, other plants and those who consume it.

It was reported that these pesticide-herbicide injected seeds affect the nearby farms where there are no GMOs...

Yes, wind will blow seeds from one farm to another. Then, Monsanto will send their inspectors who threaten the farmers for growing their seeds when the seeds reached the farm having been blown by wind.

Then, Monsanto will say, either you pay me for using our seeds or I will take you to court. There are several such cases reported in the United States and Canada where they have taken farmers to court and ruined their lives. 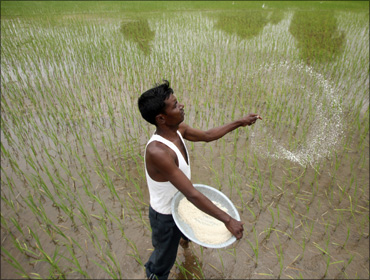 Is it because these multinational companies like Monsanto are so powerful that we do not hear many scientists or politicians talking about the harmful effects of GMOs?

Absolutely! This is why I call my latest book Corrupt To The Core. It is not just Monsanto owned by Pfizer; it is only that it is the company that has the nastiest name, but there are other companies doing the same thing.

If it is harmful to flora and fauna, is it not harmful to human beings who consume these crops?

Of course, it is! But nobody asks that question. Do you think the scientists do not know this? It is because the whole thing has become so corrupt in the hands of these companies.

In my book, I quote from a speech given in Canada in 1990 by a Monsanto executive. He said, 'MNCs will soon rule the world through intellectual property rights (IPR). We can take over the White House, the Parliament of England, France, Japan and Germany, and once we do that, we will see that China and India would come along and then we can take Africa for granted.'

I quoted this from a published paper in 1990. This is precisely what has happened.

Governments are being taken over by multinationals and governments are no longer listening to people and not working in public interest. 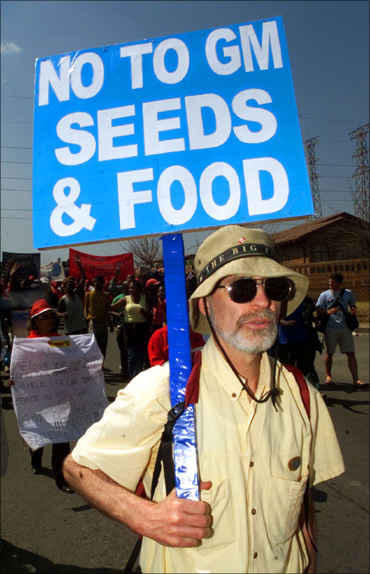 Is India the new attraction because a majority of the population is involved in farming?

First of all, America is not run by the American people any more; it is being run by these multinational corporations.

America and the other G-8 countries are on the verge of becoming bankrupt. America is a saturated economy, owes so much money to the world and is still burning a billion dollars a day on war and there is no hope of any recovery. Naturally, their next target will be countries like India.

Why did they choose Bt brinjal to market first in India: a simple vegetable that many people do not even like?

Exactly, that is the question. Many people don't eat brinjal, children hate it. Still, why do you think brinjal was chosen to be the first Bt food crop?

This is a very calculated move on their part.

Brinjal is an unimportant vegetable but it belongs to the Solanaceae family, that also has popular vegetables like tomatoes, potatoes and chillies. The Bt gene is capable of spreading to other crops from the same family when it is being blown in the wind. This way, they contaminate the entire food and vegetable supply.

Agriculture Minister Sharad Pawar and the others have already started talking about Bt sweetcorn and Bt sugarcane. Although Environment Minister Jairam Ramesh has rejected Bt brinjal for now, his colleagues are after his skin.

The prime minister has, for the first time, ordered to look at whether Bt cotton was good or bad. Why do you do it after all the fiasco? It should have been done earlier. 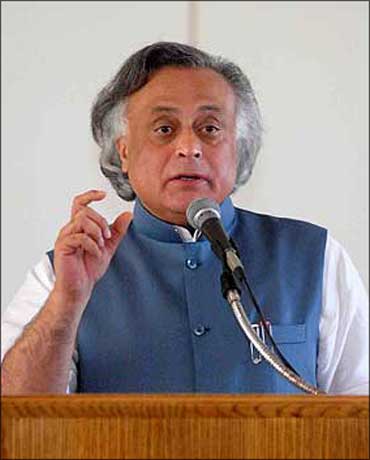 Why is it that the scientific community is not raising its voice against GM seeds?

There is corruption everywhere. It is no different in the US or Canada. Their jobs depend on this. Sadly, neither the media nor the scientific journals are reporting the facts.

Your name is synonymous with food safety. Is there food safety in any of the countries in the world?

Cuba will take the lead; their food is completely organic. India is a mixed bag. China is very corrupt, whether it is food or milk.

You said not only GMOs, but hormones, antibiotics, pesticides and slaughter house wastes also have to be banned. . .

Yes. The latest is the GMOs. For the last fifty years none of these products has been proven to be safe. It is the responsibility of the company to prove that they are safe because they are going to make money.

We now know that with the use of all these, not only cancer but other chronic diseases like reproductive disorders, neurological disorders, diabetes, and other new diseases have reached epidemic proportions.

Because of this, the European Union, led by Denmark, has banned three of these products (hormones, antibiotics and slaughter house wastes) entering the food supply.

But the US and Canada say they are alright. Yet, no country wants to buy Canadian beef. Australia and New Zealand now export food materials free of these five substances to the EU. 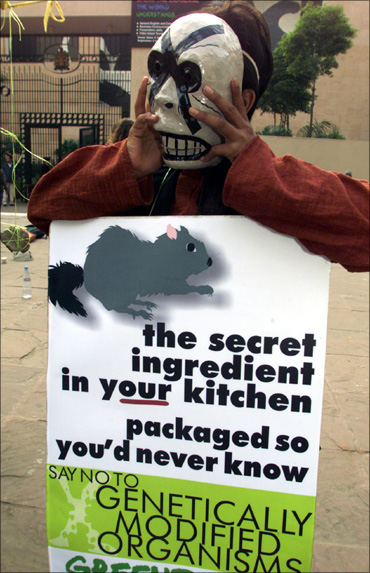 You said at a function in India that the release of Bt brinjal will be the beginning of the end of Indian agriculture. That's a scary statement. . .

In no time, potato, tomato, chilli will contain the Bt gene and there will be no ordinary tomato or potato crop that can be grown by the farmer. Only the Bt species will thrive. Even crops like rice and maize can get contaminated.

With only Bt seeds in the farms, all the seeds needed for Indian agriculture will be owned by a private company and your thousands of varieties of, say, brinjal will automatically get wiped out. That is because you will be forced to buy only one kind of seed.

That will be the beginning of the end of Indian agriculture. Remember they are not in India to help India fight hunger; they are here to make money.

How frightening is the situation for Nature and human beings?

Very frightening! The main reason America is going bankrupt is the huge expense on healthcare. They spend 16 per cent of their GDP on healthcare. If the new bill passes, it will become 20 per cent. Americans do not live any longer than other people in the world.

The fundamental question everyone asks is, what does every living being live for? Every living being lives only for food, the rest are all luxuries. We have started depleting our agricultural sector. From 80 per cent of the Indian economy, it has become 60 per cent. Now their plan is to make it 50 per cent in ten years.

The government thinks it is a good idea as there will be more progress in the cities. But who will feed all these people?