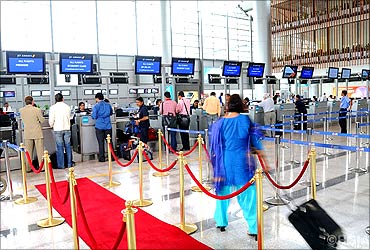 India's airports are making a mark on the international aviation map. Two airports from India have bagged the top honours from the Airport Council International.

While the Rajiv Gandhi International Airport (RGIA) in Hyderabad has been ranked as the world's best airport (in the 5 to 15 million passengers category), Delhi's Indira Gandhi International Airport (IGIA) was conferred the fourth best airport award in the world (in the 15-25 million category) and 'Best Improved Airport' in the Asia Pacific Region in recognition of its substantial improvement in passenger amenities.

The Airports Council International (ACI) is an autonomous and independent body that rates the airports on 34 parameters which included services of key regulatory agencies at the airport like customs, immigration, security, ground handling, ambience of the airport, cleanliness of the terminals, passenger satisfaction etc.

The awards were presented in China by the Airport Council International, which has 575 members operating over 1,633 airports in 179 countries. 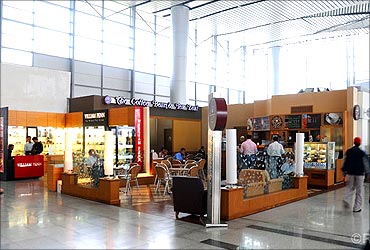 Hyderabad's Rajiv Gandhi International Airport (RGIA) has been rated the world's number one airport in the category of airports handling 5 to 15 million passengers by the Airport Council International.

The Hyderabad airport has also been voted as the fifth best airport worldwide.

P Sripathy, chief executive of Hyderabad airport, said the prestigious award will motivate the staff and other stakeholders in the airport to improve its services further. "It is an important recognition for us, which will inspire us to improve our operation even further," he said.

With one of India's longest runways (4260 metres), the airport is designed to handle 12 million passengers, more than 100,000 metric tonne of cargo and 90,000 ATM (air traffic movements) per annum in the initial phase.

RGIA is also the first airport in Asia and second in the world to be awarded LEED (Leadership in Energy & Environmental Design) Silver Rating for its eco-friendly design. Austin, Cancun, Nagoya, Jacksonville are the other airports that won in the 5-15 million passengers-per-year category. 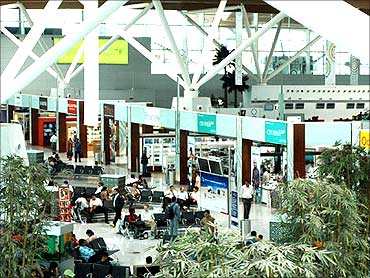 In the Asia Pacific region, the New Delhi International Airport has been voted as best airport in terms of improvement.

The award recognises those airports that have made the most progress in improving service quality. Delhi International Airport Limited is a joint venture consortium led by global infrastructure major GMR which took charge of the airport in May 2006 under the public private partnership initiative of Civil Aviation Ministry.

The upcoming T3 terminal will have a capacity of 34 million passenger traffic per annum and will become operational in July.

The 2009 passenger ratings show that despite the economic crisis, overall satisfaction at airports increased by almost 3 per cent worldwide compared to 2008. It is gratifying to see that 82 per cent of the airports were rated with stable or improved performance, the SCI survey said.

"This dual distinction is a great motivating factor for us. The achievement is a result of the effort put in by all the stakeholders at the airport and I would like to thank them all for their support. We are confident that with the opening of the swanky T3 terminal in July, IGAI's rating will improve even further," P S Nair, CEO, Delhi International Airport, said after receiving the award.

Here's a look at the world's top airports... 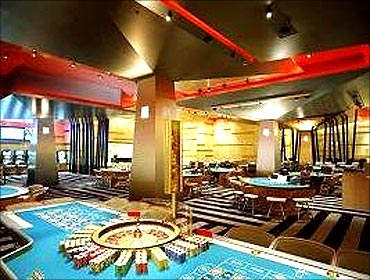 One of the largest and busiest airports in the world, the Incheon Airport is voted as the world's best airport.

It has been consecutively rated as the best airport in the world by the Airports Council International since 2005. It has received the full 5-star ranking by Skytrax, shared only by Hong Kong International Airport and Singapore Changi Airport.

In 2009, Incheon International Airport had been voted as the world's best airport by Skytrax. The airport has unique luxury features such as a golf course, spa, private sleeping rooms, a casino, and indoor gardens. 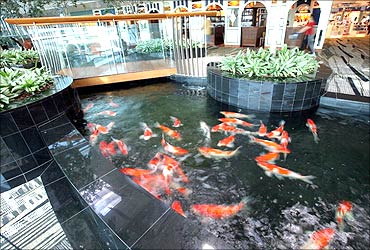 With over 300 awards, the Changi Airport ranked as the second best airport, is truly Singapore's pride.

Recognised as one of the best airports in the world, it has 80 airlines serving 200 cities in 60 countries. The airport now has an annual handling capacity of more than 70 million passengers.

The Changi Airport handles more than 4,500 arrivals and departures weekly and over 37 million passengers a year. 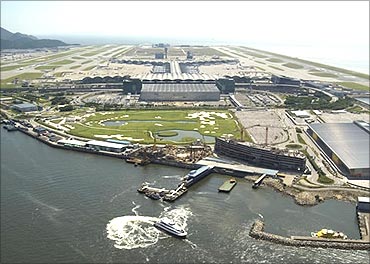 About 90 airlines operate flights to around 150 destinations worldwide. HKIA also operates one of the world's largest passenger terminal buildings.

Direct ferry services are available from the airport to various destinations throughout the Pearl River Delta.

The Airport saw a passenger movement of 46.1 million in 2009. The Airport offers a great shopping and dining experience. 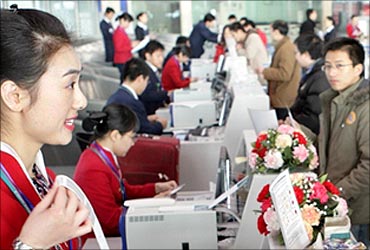 The Beijing Capital International Airport is the largest and busiest airport in China.

In 2009, it won the Cond Nast Traveler magazine's World's Best Airport Award for factors such as cleanness, speed of security/immigration clearance and luggage handling.

More than 5,000 scheduled flights are available to 88 cities in China and 69 cities abroad.

Beijing Capital added the huge Terminal 3 in 2008, the second largest airport terminal in the world after Dubai International Airport's Terminal 3, and the third largest building in the world by area.

An indoor garden in the Terminal 3 waiting area is designed in imperial style. The T3 food-service area offers the best dining experience at the same prices as in Central Beijing.