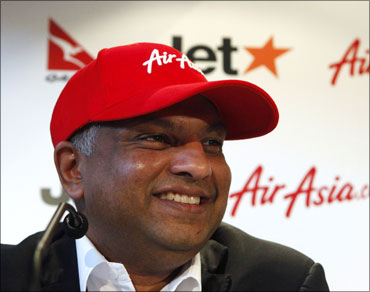 The lobby of Hyatt Regency hotel in Mumbai is teeming with youthful AirAsia staff. They're in a terrific mood, making plans for the evening; one of them is boisterously complaining that he hadn't gotten to see Preity Zinta or Aishwarya Rai.

Their irreverent exuberance is very much in character with their millionaire boss Tony Fernandes, pioneer of low-cost flying in Asia, with whom Dinner with BS had to be changed to Tea with BS and eventually to Water with BS because that's all he opted for.

Mumbai is the sixth Indian destination for AirAsia X, the Malaysian airline's long-haul company (which Fernandes describes as "AirAsia on steroids"), but it's made a media splash because Fernandes has accompanied it.

Near the hotel, a huge hoarding, presumably put up by a vendor, welcomes him. He hasn't seen it but someone has sent him a photo with the question "Have you become a politician?"

It's probably just as well 46-year-old Fernandes, who is AirAsia's group CEO, didn't choose a political career. He's about as politically correct as his former boss  Richard Branson (now 16 per cent shareholder in AirAsiaX) and as audacious in his conversation. He has a heavy cold coming on, but retains his flippant good humour through our chat. 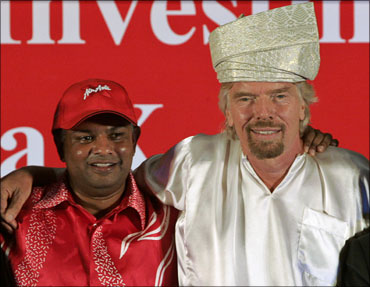 His connection to India goes beyond inbound flights or plans to set up budget hotels. It turns out that his father was Goan and studied at La Martiniere school in Kolkata. He recalls his father's house at Circus Range, playing cricket and football at Mohun Bagan and hanging out at "Calcutta Sporting Club" with Vece Paes (father of tennis player Leander), who was a family friend.

He remembers the club as "a great place, everyone drank like a fish," which fits the description of Calcutta Cricket & Football Club (there's no Calcutta Sporting Club in the city), that can still boast some awesome drinking talent.

Fernandes' father was a doctor with WHO and met his mother when he was posted in Malaysia. "My mother was a Fernandez as well, with a 'z', and her ancestors were Malyalee," he says. "Whenever my parents fought they called each other 'Goan bastard' and 'Malyalee bitch'. So you see I figured India's actually a continent with 15 countries or something."

His education, though, had little to do with aviation or India. He went to boarding school in England at age 12.

"My father was a nutcase who went to boarding school when he was five -- so he packed me off on a plane with 50." He remembers school being "like a borstal but I loved it", principally because he was good at sports -- cricket, rugby, football. 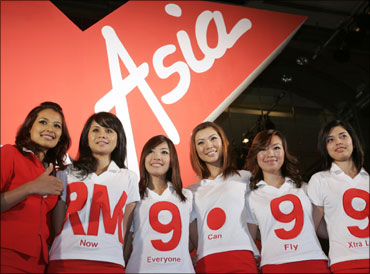 After graduating from the London School of Economics, the question came up of what he wanted to do. "My father wanted me to be doctor. I rebelled and told him if he made me do this I would fail. He said no respectable Indian boy would do that, so I just wrote my name on the examination paper and fell asleep."

After he "bummed around" the US and Australia for two years, his father insisted he do accountancy. "I agreed since he was paying for it but I hated it so much, though I passed at the first attempt."

Fernandes started his career as an accountant but "auditing drove me completely nuts" so after six months he wrote to every record company because he was a musician as well. He says he plays the keyboards "but give me a beer and I can play most things".

What kind of music did he play? "That depends on the price of oil," he jokes, "I play blues if the oil price is high and rock n'roll if it's low."

Anyway, most record companies told him to "go to hell" except Virgin. "Branson was already a legend then and he took a liking to me and offered me a job that I never should have got." 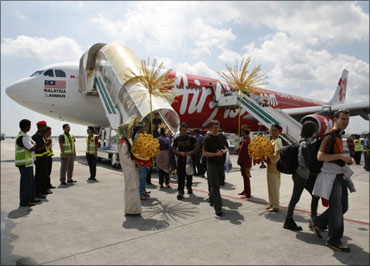 Then followed ten "fantastic" years in Warner. He knows Mumbai (he still calls it Bombay) through the music industry where he used to "hang out with Salman and Shah Rukh".

Businesswise, he recalls being in a "very unique position because I managed to convince both Tips and T-Series to sell their music to me even though Tips was accused of murdering Gulshan Kumar" (the T-Series proprietor).

He remembers Kumar's son, who took over the business as a teen after his father died, as a "nice boy with lots of Ferraris", but recalls T-Series as a "loony kind of organisation, but they made great music and we sold lots of it".

In his official CV, Fernandes' name is prefixed by Dato' Sri. He explains it's the equivalent of a knighthood in Malaysia, which is nominally a monarchy. 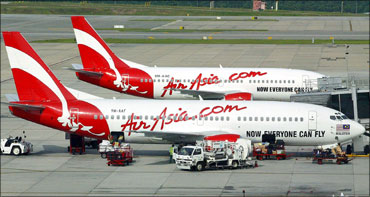 We chat about how India abolished the use of titles and he recalls that he's due to meet Ratan Tata the next morning (stream of consciousness: Tata was appointed honorary Knight Commander of the British Empire last year). "Nice guy?" he asks of one of India's most powerful industrialists. I tell him Tata is a qualified pilot and occasionally flies his own aircraft. Did Fernandes fly? "No, don't have the balls," he replies.

This despite the fact that he's taken bigger risks than most people would, acquiring AirAsia in 2001 when it was $100 million in debt for 25 cents. What made him do that?

"I always wanted to own an airline," he replies, adding, when he sees my disbelieving look, "I know, it's one of those things people say but I think of airports as essentially happy places and I find flying exciting. Also, I guess deep down I'm a left wing kind of person and I think you can be a caring capitalist. One thing led to another, I saw Stelios of EasyJet on TV and thought, wow, if I can make flying more affordable. . ."

Despite the worsening cold, Fernandes is more animated now, talking about the "miracle of AirAsia", which he managed to turn around by 2002. "It is unbelievable how we built this airline. I never really had time to think about it until people asked me questions about it."

How did he make it work, when India's own low-cost airline guru Gopinath had to sell out in a welter of losses, I ask. "We were very aggressive marketing-wise and it helped that we had a product everyone wanted. We capitalised on that with low costs," he replies. 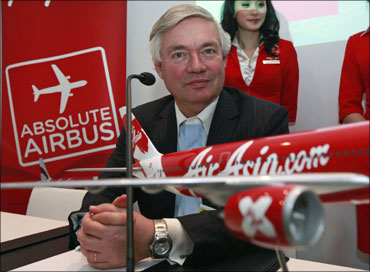 None of the incumbents -- not least Malaysian Airlines -- took him seriously. By the time they did, AirAsia was too big, "In my first year we carried 200,000 passengers and we had two planes. This year, we'll carry 27 million passengers and we have 92 planes."

Nor has it been a joyride. "We have been through every calamity known to mankind -- Sars, bird flu, tsunami, earthquake, terrorism, airports closed, red shirts, coup d'etats, you name it, we've faced it."

"But we always managed to find a way around the crises by being very innovative." For instance, after Sars, most airlines cut flights. "But I knew Malaysians well; if you lower fares enough they'll risk their lives. So 400 ringitt -- there's Sars; 40 ringitt, who cares about Sars! We didn't make a lot of money but we did cover our costs."

How did he keep costs low on a regular basis? "Just focus and discipline." He says he works on the shop floor. "I walk around. I used be a cabin crew and carry bags though I don't do that so often now."

He claims salaries are higher (the communications manager laughingly shakes her head) but productivity is higher than most airlines. "We do everything ourselves. Our cabin crew will clean the planes, will do boarding in some places, and we do our own handling." He claims AirAsia has 68 employees per aircraft, among the lowest ratios in the world. 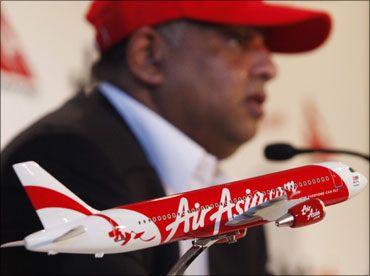 In August, he'll be in Delhi to launch another AsiaAsiaX flight, then there are plans to add Hyderabad and Bangalore to the network. "Everyone says low cost won't work in India, but we have made it work. All you need is focus and discipline to build a new market," he says.

You'd think all this would have kept Fernandes busy, but no, he's extended his tenure as team principal of Formula 1 team Lotus Racing. He's bet Branson, who also has a team in this season's competition, that whoever loses will serve as a steward on the other's airline. Neither team has any points but Lotus is ahead on finishes and is confident that it will be Branson who'll do the serving.

By now he's yawning and sniffling and his communications manager is panicking because he's late for a dinner downstairs. We head down and as Fernandes enters the restaurant, he places an AirAsia cap on his head.