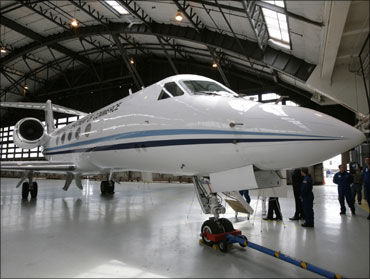 Although the Indian aviation sector is finding it tough to manoeuvre smoothly through the storm churned up by high operating costs, falling passenger numbers and tough competition, Indian Inc seems to be flying high in more ways than one.

Gone are the days when big cars were the fancy of the business glitterati; now it is sleek business jets and luxury yachts that rivet their attention. Not only is corporate India acquiring international companies, but it is also picking up private jets along the way.

More and more global executive jet makers are eyeing India as one of the strongest markets for these airplanes.

Even businessmen from Tier-II and Tier-III towns are interested in owning a private jet. The mining town of Bellary, in Karnataka, has earned the epithet 'the private aircraft capital of the country'.

Click NEXT to take a look at the exclusive club of businessmen with their own private jets in India . . . 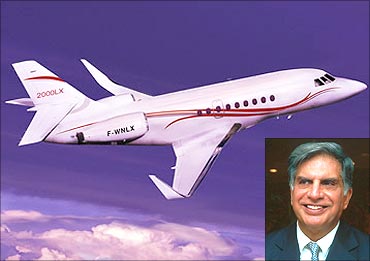 The Tatas are not new to aviation. The legendary JRD Tata is celebrated as the father of India's civil aviation.

The current Tata Group chairman, Ratan N Tata, clambered on into the cockpit when he was only 14; he made his first solo flight at 17, the legal age to fly an aeroplane.

He had become a cleaner at the local flying club to gain flying hours when he was as an architecture student at Cornell in the United States.

His under-17 classes were taken at the Bombay Flying Club, where he learned to fly a two-seater Piper-Cub aircraft.

Tata likes to fly his private jet himself. He has a Falcon Jet that is no longer used for commercial aviation. The Falcon made by Dassault, the French aviation major, is run by Taj Air, a company owned by him.

He had also flown F-16 and F/A-18 planes at the Aero India 2007 air show. Tata had said in an interview that aviation is his first love and only passion.

"The idea of flying an F-16 excites me. I am a trained pilot for both planes and helicopters." The F-16 Tata flew belonged to Bloc 50 of the US Air Force. 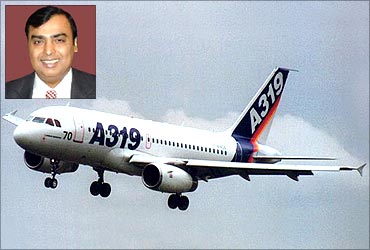 Ambani is also the 4th richest man in the world, according to Forbes.

In 2007, Mukesh Ambani had gifted his wife, Neeta Ambani, a Rs 2.4 biilion (Rs 242 crore) Airbus 319 Corporate Jet on her 44th birthday. It is a luxury jet with entertainment cabins, a sky bar and fancy showers.

Ambani also owns a Boeing Business Jet 2 which is worth $73 million and also a Falcon 900EX.

Ambani's Airbus 319 is custom-fitted with an office and a cabin with game consoles, music systems, satellite television and wireless communications. 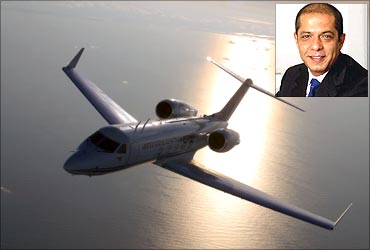 Atul Punj, chairman of the $2-billion Punj Lloyd Group, too owns a Gulfstream IV which has an aerodynamically and structurally improved wing with 30 per cent fewer parts.

The aircraft has provisions for two beds.

It also has an in-built shower and a luxury living room space - to make sure the journey is a relaxed one. 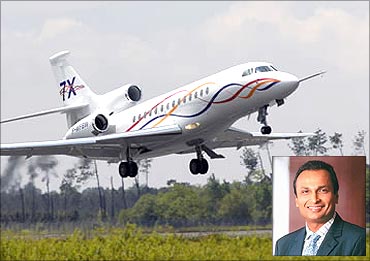 Like his elder brother Mukesh, Anil Ambani too owns a Global Express, besides a Falcon 2000, and Falcon 7X.

Anil's Global Express is the ultra-long range business jet developed by Bombardier Aerospace. Bill Clinton and Steven Spielberg are other owners of such jets.

Reliance ADAG chairman Anil Ambani had used two of his jets -- Falcon and Bombardier -- for conducting roadshows for the Reliance Power Ltd's IPO, the first in his group since the Reliance demerger.

The Bombardier can fly over 5,950 nautical miles. Bombardier's 14.73 m-long cabin boasts of a noise and vibration cancellation system, which makes it easier to hold meetings on board.

It also has a customised interior layouts include office, stateroom and a conference-style area. 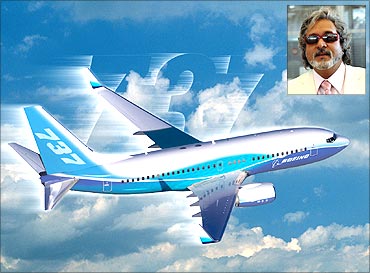 Mallya uses his aircraft as office-cum-home. Apart from the A319-13-ACJ, he also owns a GulfStream, a Hawker and a Boeing 727.

The A319 is one of the smaller members of Airbus' highly successful single-aisle airliner family.

Mallya's Airbus A319 can fly to London or the United States with a single refuelling halt.

Boasting of plush interiors, it has the capacity to seat 24 people and has 6,000 cubic foot of living space. 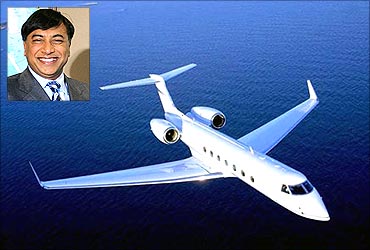 NRI steel baron Lakshmi Mittal, owner of the world's largest steel company ArcelorMittal, is the richest Asian in Britain for the year 2010 with an estimated wealth of 17 billion pounds.

The steel baron uses his Gulfstream G550 to traverse three countries in a day.

Mittal's Gulfstream G550 is regarded as the Rolls-Royce of private jets. It can reach speeds of 675 miles per hour, and can carry eight passengers. 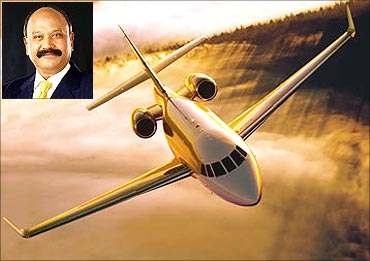 G Mallikarjuna Rao, the GMR chief whose company has won contracts for privatisation of the Delhi, Hyderabad and Istanbul airports, logs at least 100 hours every month flying the Delhi-Mumbai-Hyderabad route on his Falcon 2000.

"Rao spends several hours of waking time in his plane," says an executive of GMR. Two sets of pilots optimise the use of his aircraft.

His Falcon 2000 has the same fuselage width as the Falcon 900B while the cabin is slightly shorter. He also holds meetings aboard his plane. 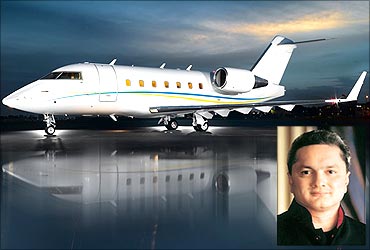 Singhania, the chairman of the Raymond Group, has driven a Formula 1 car in France: a Ferrari 360 Modena in rally across Europe.

He owns a Challenger business jet and a helicopter. International aircraft refurbisher Eric Roth is behind the beige and brown interiors of Singhania's Challenger and an 18th century jamawar shawl of Singhania's choice apparently served as the inspiration. 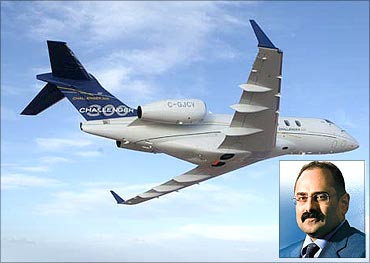 Entrepreneur-politician Rajeev Chandrashekhar was always a keen flier and own a private jet.

Recently, he bought a Bombardier Challenger 300 for Rs 1.4 billion (Rs 140 crore). The silver-coloured aircraft is a 9-seater and has plush beige interiors.

It has the latest generation glass cockpit, a flying range of 3,500 nautical miles (6,475 kms) with luxurious cabin fitting and customised music, sound and video system. 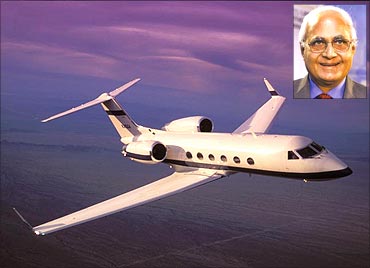 The Gulfstream IV is a significantly improved, larger, longer range and advanced version of the earlier Gulfstream II and Gulfstream III models. It offers long range luxury transport for up to 14 passengers.

The most noticeable improvement on the G-IV over the earlier Gulfstream models are the Rolls-Royce Tay turbofans, which significantly reduce fuel consumption and noise pollution.