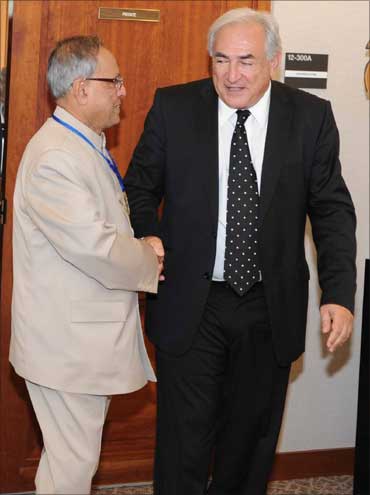 Finance Minister Pranab Mukherjee has asserted there's been no pressure by the United States for India to enact financial sector reforms, particularly in the banking and insurance sectors, on the eve of President Obama's visit and argued that lack of movement on such reforms was solely due to the Congress party having no majority in Parliament.

In an interaction with the media in Washington at the conclusion of his participation at the annual World Bank-International Monetary Fund meetings, Mukherjee said, there's "no question of pressure coming from any side. Why the legislations are being held up, you are fully aware of it -- the Congress party does not have the clear majority of the floor of the House to get the legislation started."

"Legislations cannot be done only on the basis of intention," he said. "You require the number -- majority on the floor of the House, and we do not have 272."

Mukherjee said, "It is because of that the Pension Act could not be legislated. Even though the proposal was before Parliament, it could not be passed. Same is the story of the Insurance Act." 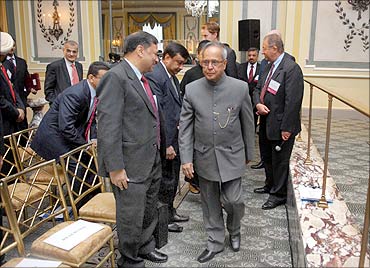 Thus, he reiterated that "it's not a question of anybody putting pressure," and pointed out that "long before the visit of President Obama -- it was in January 2004 Pension Fund was created before the United Progressive Alliance government came into being. And, thereafter, the legislation was adopted and introduced on the House."

"But we could not get it passed because there was no consensus. Same is the story with the insurance. So, it is not linked to anybody and we do feel that these reforms are necessary for the betterment of our economy -- that is our own understanding and it is not linked with anybody's visit," he said.

Asked as one of the longest serving Cabinet officials to assess the progress of Indo-US relations over the past three decades, from the Reagan era though the George W Bush period to the Obama administration now, Mukherjee said there's no denying the exponential growth of the relationship economically and politically with the signing of 'some major instruments'.

For example, he said, "In the case of defence, there was a time where we never contemplated of having any cooperation in the defence sector. But when I was defence minister and during my visit to the USA, we signed the Indo-US Defence Framework Cooperation Agreement on the basis of which now government-to-government FMS (foreign military sales) route, defence exchanges have taken place -- talks are going on." 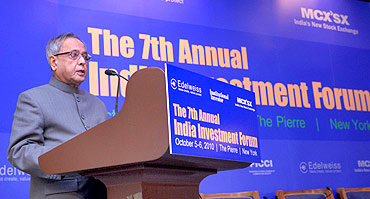 "Some of them (US companies) are also participating in the open bids when the requests for proposals are being circulated. So, this is one major area."

Mukherjee said, the second major highlight of significant during the past three decades, "is of course, the civil nuclear cooperation agreement. So, institutional framework has expanded to accommodate the growing relationship -- this is a major change."

But when reminded of continuing US export controls on dual-use technology to India and the Entities List which still has on it even government agencies like DRDO and ISRO that are denied such technology despite the so-called Indo-US strategic partnership, Mukherjee said, "We are talking and this is one area we do feel that number of Indian units which are in their Entities List should be removed. So we are talking and exports controls also; we are in the process of dialogue."

On the currency controversy, particularly vis-a-vis China, over which the IMF has predicted that very soon there could be a currency war worldwide, Mukherjee acknowledged that the G-20 summit in mid-November could possibly be a forum where it could be discussed, since "China is an important member of the G-20, USA is there and all the other major economies of the world are there and nothing is preventing of bringing it up." 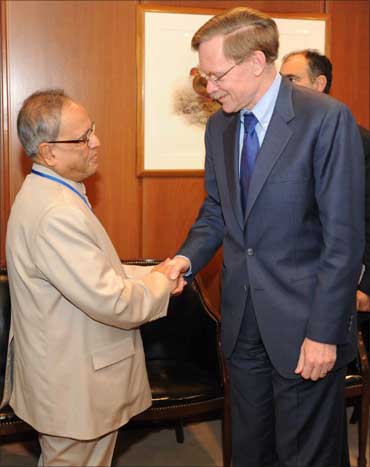 "But whether it will get the priority or if it will be on the agenda or not, that will be determined when the G-20 finance ministers are meeting in the third week of October and they will make recommendations to their leaders."

When pressed if they should, Mukherjee said, "I do not know because I have not yet got an indication that in G-20 finance ministers' meeting this is going to be a top priority area."

A large number of developing countries, which are completely controlled currency prices -- which are not market-related -- they have different views. Therefore, you cannot have a formulation when you are on the transition phase. And, you cannot sit on a value-judgment," he added.