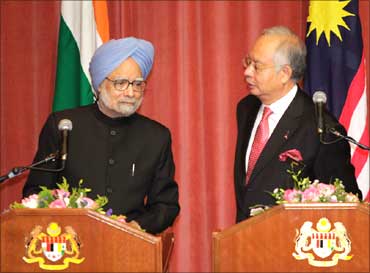 "The world is large enough to accommodate the growing ambitions of both India and China," Prime Minister Manmohan Singh said on Wednesday in Kuala Lumpur.

He was answering a question on how the impressive rise of India and China was changing the global economic order and how would India share this growth.

The prime minister said that both the Asian giants are very fast growing economies, and Beijing is New Delhi's largest trading partner.

While India welcomes competition from China, enormous possibilities of working together too exist, he added. 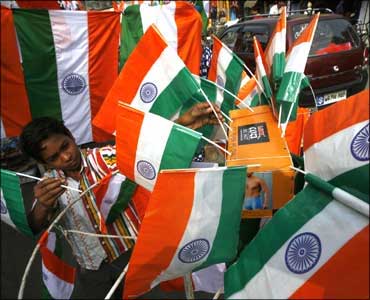 Dr Singh said that after gaining independence in 1947, India's principal challenge was to fulfill the aspirations of such a large and diverse society and civilisation that is home to all the great religions of the world, and has been so for many centuries.

But over time India's growth began to lag behind that of other newly industrialising countries of Asia. "Our economy got stifled with bureaucratic control," he said.

"However, India's policies began to change, gradually at first in the 1980s and much more decisively in the 1990s. New Delhi liberalised the domestic economy and opened up to foreign trade and investment. It also recognised the need for market forces. The private sector was increasingly freed to get on with its business," he said.

And although these steps were initially met with resistance, soon they were widely accepted.

The economic reforms of the 1990s unleashed the creative and entrepreneurial spirit of Indian industry.

India's growth combined greater openness with an ability to withstand external turbulence as it was not buffeted by the East Asian crisis in 1997. 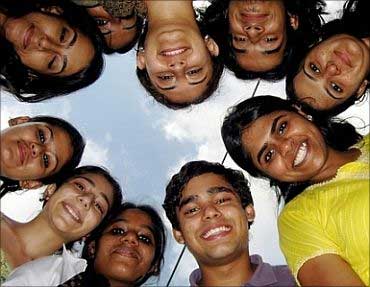 India's biggest asset is its people, the prime minister said. At a time when the industrialised world is aging rapidly, India has the advantage of a young population.

The dependency burden in India is expected to keep falling for another 20 years.

He, however, cautioned that a young population is an asset only if it is educated, skilled and finds productive employment.

"If this were to happen, our objective of realising India's potential to grow at 10 per cent or more per annum for a substantial period of time can become a reality," he said.

The future of the global economy in the 21st century lies in the knowledge economy, he added.

More recently, India's economic performance has shown further improvement. The gross national income of India grew at over 9.5 per cent per annum for three consecutive years starting in 2005. 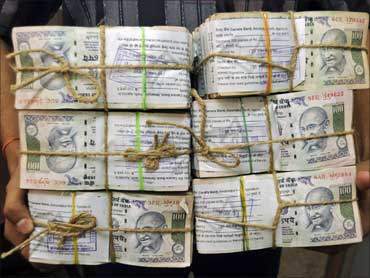 After the global crisis exploded in 2008, India's growth rate slowed down but India was even then among the three or four fastest growing nations in the world.

"We took a number of measures to stimulate the economy and we expect 8.5 per cent growth in the current year," he said.

Rapid economic development requires high rates of savings and investment. For a long time it used to be common wisdom that only an East Asian country could save and invest more than 30 per cent of its national income.

"If that be true then, geography notwithstanding, India is today an East Asian country!  India now saves and invests well over 30 per cent of its GDP," Dr Singh said.

He also said that New Delhi has initiated a number of far-reaching programmes that have the potential to change the face of rural India and to make our growth more inclusive.

These cover rural health, employment guarantee, urban reforms and rural infrastructure and focus on people's participation and empowerment and the quality of services. 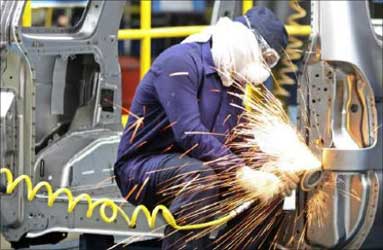 Inadequate infrastructure is a major constraint on our performance and we are determined to overcome it.

In the Eleventh Five Year Plan that ends in 2011-12, India had targeted investment in infrastructure of $500 billion.

"We hope to step this up to $1 trillion in the 12th Plan. Malaysia has well known strengths in building infrastructure and we welcome greater Malaysian participation in this sector," Dr Singh said.

There are big plans afoot in India to set up special investment funds that can be used to finance long-gestation infrastructure projects. "We hope to attract Indian and international funding into these projects," he added.

He said that he was convinced that if this and future generations of Indians and Malaysians remain true to the ideals of those who secured national independence and forged new nationhood, India and Malaysia will continue to prosper as good neighbours.

"Together we can and we will contribute to the prosperity of Asia and the world," he said.