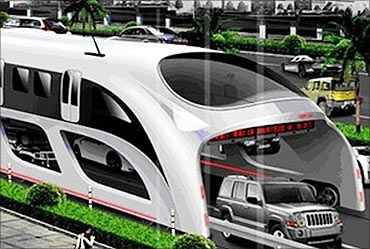 Chinese officials has found that the monster 'straddle bus', a newly developed design of a vehicle which can ply over the road leaving enough space for a two-lane traffic underneath, has proved to be workable, its designer said.

A working group led by Professor Zhang Jianwu from the School of Mechanical Engineering at Shanghai Jiao Tong University conducted the research that proved it could work, Song Youzhou, the vehicle's inventor told the official media in Beijing.

The 'straddle bus' spans two traffic lanes and sits at a height of 4.5 metres. It would be used on major roads in cities and could reduce road traffic by 20 to 30 per cent, according to Song. 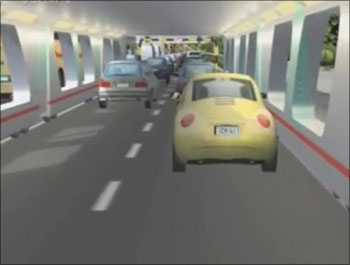 The bus would run along special tracks set up on a pair of stilts on both sides of the road so that ordinary cars can pass underneath it.

Some people had safety fears about the concept, but the designer says that proper measures have been taken to avoid danger and laser scanners between the legs warn vehicles to keep a safe distance. 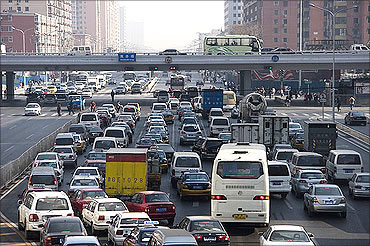 The cost of manufacturing the bus and building the road facilities would be 50 million yuan ($7.3 million) per km, about one-tenth the cost of a subway line of the same length.

The time it would take to build its tracks is three times faster than that of a subway.

The emission-free vehicle would run on 700 volts of electricity supplied at stops and overpasses through solar energy.

Blueprints for the vehicle have been forwarded to a combustion engine manufacturer in Changzhou City, Jiangsu Province, and a rail wagon producer in Shijiazhuang City, Hebei Province. 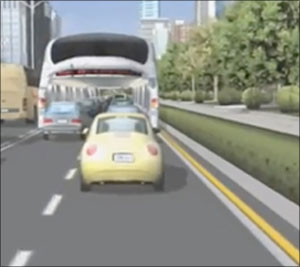 "If things go smoothly, the bus is expected to hit the road by the end of next year," he said.

At the end of 2009, China's urban population hit 620 million and the number of vehicles totalled 63 million.

Rush hour in major cities like Beijing and Shanghai is horrific, and parking places can be hard to find.

Despite the invention being hailed as a breakthrough, Luo Jiade, a sociology professor at Tsinghua University, is sceptical.

"Cities like Beijing have already built a subway and bus system. It will be difficult to integrate so many means of public transportation into an organised network," he said.

Due to its potential efficiency and cost savings, Beijing is now considering the bus as part of the city's long-term traffic design in which Beijing will have more than 1,000 km of rail track, Song said. Powered by electricity and solar power, the straddle bus can travel up to 60 km per hour.