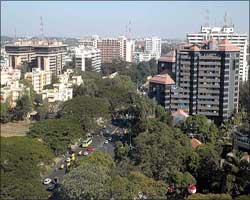 Mahatma Gandhi had once famously said, "India lives in its villages". With the urbanisation of China in the last 20 years, India is the last major country with a rural majority (65-70 per cent of the population still lives in villages). However, this is changing very rapidly.

Within 15 years, states like Tamil Nadu, Maharashtra and possibly Gujarat and Punjab will have an urban majority. By 2040-45, we can expect the country to have an overall urban majority. This transformation will have important implications for the country's social, cultural, economic and political landscape.

Environmental sustainability is a critical area that will be affected by the shift. To the lay person, it may appear that urbanisation is an unmitigated disaster for the environment. International experience suggests, however, that what really matters is the type of cities we build.

Take for instance, Barcelona and Atlanta - both former Olympic hosts with populations of around 2.8 mn and with roughly the same standard of living. Yet, studies have shown that the per capita ecological footprint of Atlanta is four times that of Barcelona! Indeed, Barcelona's per capita environmental impact is lower than that of many rural areas of Europe. So, how can we ensure that India's future urban trajectory follows Barcelona rather than Atlanta?

The importance of urban form

There has been much discussion in the media recently about "green" buildings. A plethora of "green codes" have been initiated including LEED, GRIHA and so on. My discussions with leading architects suggest that these codes typically give us energy savings of around 15 per cent (higher savings are possible but they involve sharply higher costs). This is a useful saving but it cannot account for the difference between a Barcelona and an Atlanta.

The problem with so-called green codes is that they exclusively focus on maximising the efficiency of individual buildings whereas the real gains come from the overall design of the city: Is the city dense or sprawled? Do people live in apartments or free-standing houses? Is the city designed for public transport?

For instance, energy use drops by over 30 per cent just by moving people from houses to apartments even if we ignore the green codes. Similarly, public transport systems do not work efficiently when the city is spread out and commuters cannot easily walk to the bus/metro stop.

Atlanta has a metro network of 74 km while Barcelona's is 99 km. These may seem comparable, but per capita CO2 emissions for Atlanta are ten times Barcelona's. The difference is mostly explained by urban form. Barcelona is compact and dense while its American rival is spread out. The longest possible distance within the city is 137 km while in Barcelona it is only 37 km.

As a result, less than 4 per cent of Atlanta's population lives within a reasonable walking distance of a metro station compared to 60 per cent for Barcelona. Not surprisingly, a large proportion of Barcelona's citizens walk or use public transport while in Atlanta one is forced to use a car.

Interestingly, the very same factors affect environmental, economic and social sustainability. Manhattan is not just the densest urban area in the US, it is also an economic powerhouse, a lively socio-cultural centre and has the lowest per capita ecological footprint in North America. In Asia, we see the same factors at work in Tokyo, Hong Kong and Singapore.

As India transforms into an urban majority country, we will need to accommodate another 350-400 mn people in urban spaces. The existing large cities are already bursting at the seams and we will have to expand existing towns/cities, urbanise villages and build brand new towns.

This requires a sensible template for urban planning. The above discussion shows that urban form, particularly density, must be a critical part of the thinking. The implications of this line of thinking, however, can be counter-intuitive. For instance, it suggests that the crowded bazaars of Mumbai are more environmentally sustainable than the green lawns of Lutyen's Delhi.

So what should we do? First, we need to give up creating flat urban sprawls based on outdated ideas about American suburbia. We are still expanding cities by carving out small plots and parceling them out to individual owners (as happened in Gurgaon). In turn, this is gobbling up farm and forest land. This must stop.

Second, public transport must be built into the urban design. In particular, we need to recognise that the most important form of public transport is "walking". Even in a city like Mumbai, half the people walk to work. The ratio is even higher in small towns.

In addition, the last mile of all other forms of public transport has to be walked. This means that the vast majority of people walk all or part of each journey. Yet footpaths, pedestrian crossings, and over-bridges are rarely given priority in Indian urban planning. On the contrary, road widening (a euphemism for narrowing the side-walk) is given high priority.

Finally, we need to get away from designing urban spaces according to the sterile aesthetics of real estate brochures. It is no longer meaningful to design for separate "zones" for commercial and residential activity (except for hazardous industries). Successful cities are an evolving mix of all kinds of activity and we need to allow for this.

Even the much maligned street hawkers are a part of the city and a part of Indian urban tradition. Urban planners need to design them into the urban landscape (for instance, Singapore has created a successful network of hawker-centres across the city).

It's not just the mega-cities

India's future urbanisation is not just about migration to mega-cities like Delhi, Mumbai and Bangalore. In an earlier column, I had argued that it is essential that we revive small mofussil towns as economic, social and cultural centres.

The above principles of sustainable design apply equally to them even if the details have to be modified to local circumstances. In other words, we should not be building sprawled developments in small towns just because land is cheap.

To conclude, we need to build next-generation cities on the basis of density and walkability. This needs to be internalised in our urban thinking as soon as possible because it is very difficult to change urban form retrospectively. According to the World Bank's World Development Report 2009, for Atlanta to achieve Barcelona's metro accessibility it would require 3,400 km of new tracks and 2,800 new stations.

Similarly, if we retrospectively densified Lutyen's Delhi, we would severely strain the infrastructure and probably gridlock the rest of the city (imagine driving from Vasant Vihar to Connaught Place without being able to speed down Shanti Path). Thankfully, much of urban India is yet to be built and we have an opportunity to change our model in time for the coming urban boom.