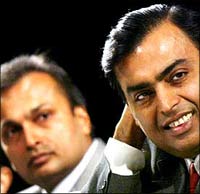 The waters in the Reliance Industries Ltd (RIL) D6 gas block in the Krishna Godavari basin got murkier on Wednesday with the office of the Comptroller and Auditor General (CAG) denying that it had completed the audit process of Reliance-Niko's expense gas expenses.

The Director General of Hydrocarbons, V K Sibal, had Tuesday said the CAG has completed its audit of the expenses that RIL-Niko claims to have incurred in bringing the KG D6 block to production.

This led to repeated requests by the Anil Ambani group, embroiled in a dispute over supply of gas, to make the CAG report public.

An official spokesperson of the CAG office, talking to DNA Money on Wednesday night, said the audit is not yet complete as some documents have not been provided.

"We went there after the petroleum ministry asked us to audit the accounts. We have also gone through some of the documents, but audit is certainly not over," the spokesperson said, adding that the audit cannot be closed till some documents that had been requested are furnished.

"We are waiting for the documents and until they reach us, we cannot reach a final conclusion. At this stage, we cannot say anything more," the spokesperson said.

However, Sibal, who on Tuesday said CAG had completed its audit, re-affirmed his position on Wednesday.

"The audit has been completed. They take their time in making it public, first they have to submit their report to the Parliament. Whatever recoveries are mentioned in the report will be made [from RIL-Niko]," Sibal told DNA Money.

The CAG spokesperson said the agency always submits the results of any completed audit "without any delay" to the Parliament.

Sibal's comments were prompted by an 'expose' by the Anil Ambani group of links between 'independent' auditors appointed by the government and the subject of the audit - RIL.

In a hurried press conference, Reliance Power CEO J P Chalasani presented proof that both the government's 'independent' directors were associated with Reliance Industries or its promoter Mukesh Ambani.

"The first independent appraiser, Dr P Gopalakrishnan, is a faculty at a college where the chairman is Mukesh Ambani," Chalasani, one of the seniormost officials in the Anil Ambani group, said.

According to the website of Ahmedabad-based School of Petroleum Technology, verified by DNA, the board of governors is headed by Mukesh Ambani as the chairman.

The website, www.iptg.ac.in, also lists the name of P Gopalakrishnan as an adjunct faculty specialised in the subject of reservoir evaluation and modeling, enhanced oil recovery, operations and production of petroleum.

Chalasani also named other functionaries common to RIL and the institute, pointing out that there was a conflict on interest in Gopalakrishnan being asked to check the accounts of Mukesh Ambani promoted RIL.

Chalasani also attacked the credentials of government's second 'independent' appraiser, the Texas-based Mustang Engineering. Quoting media reports from 2006, he suggested that Mustang was the subject of abortive acquisitive designs of RIL just before the petroleum ministry roped it in as an 'independent' external auditor of RIL's accounts.

Chalasani also pointed out that shortly after Mustang had given RIL's its green signal for the accounts related to the D6 block, Mustang was given a contract for providing "detailed engineering services" for the Panna oil field off Mumbai. RIL holds a 30% interest in the field.

When asked whether the government knew of the previous relationships of the independent assessors with RIL, Sibal said he did not want to get into an argument on the matter with Anil Ambani.

"Let us close the issue. We are a government agency. People who are saying these things are either ignorant or malafide," he said.

Besides the status of the 'external auditors', Chalasani also kept up the attack on the rise in the exploration and production costs shown by RIL.

"The revised expenses are many times the initially approved expenses, even though the equipment utilised in the operation did not show any great increase," he said.