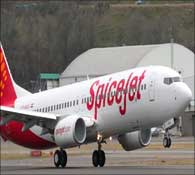 Private airlines, who called off their strike threat after the government contemplated action, continue to argue they backed down because they didn't want to inconvenience passengers, but maintain that their reasons for striking remain as valid today - a very high aviation turbine fuel price and high airport charges in the country.

Much of this is untrue, and what the larger airlines are not saying is that there was a split in the Federation of Indian Airlines - under whose aegis the strike threat was announced - with the budget carriers unwilling to go along with the larger full-service carriers who, incidentally, also offer low-fare services.

Indeed, just how justified the airline grievances are is best brought out by the sharp contrast in the performance levels of the two sets of airlines.

First, not everyone in the aviation business is making losses - it is the full-service carriers who are losing the most.

Interestingly, this has taken place while aviation turbine fuel prices in India, though much higher than those internationally, have fallen by almost half - from Rs 71,028 per kilolitre in Delhi in August 2008 to Rs 36,992 in August 2009.

SpiceJet's revenues rose and its losses of Rs 129 crore (Rs 1.29 billion) in the June 2008 quarter got transformed into profits of Rs 26 crore (Rs 260 million). None of this jells with the argument often made by private airline companies - that since aviation fuel comprises around 40 per cent of costs, India's higher aviation fuel costs are the reason for their losses.

Of course fuel costs matter, but what matters more is how efficiently the airlines are managing other costs; if the plane is flying anyway, are they getting the maximum number of passengers they can, and so on.

Once again, this is where the budget carriers score over their full-service counterparts. Air India has a passenger load factor of 67.9 per cent, Jet Airways' is around the same and Kingfisher's is 72 per cent - SpiceJet, however, is 77.3, GoAir 85,1 and IndiGo 81.6 per cent (all figures for June 2009).

That is, the budget airlines are getting in more passengers per flight. Since they have lower costs of flying, this means their costs per passenger seat are much lower than those of the full-service airline.

As a result, SpiceJet has added 20 more flights in existing routes and leveraged the fuel price reduction by cutting fares by around 30 per cent to 40 per cent. SpiceJet has bought three new aircraft this year and there is no change in its original delivery schedule.

Jet Airways, on the other hand, has cut capacity by 20 per cent and deferred eight aircraft deliveries. Kingfisher has deferred the delivery of 32 aircraft and reduced capacity by 26 per cent.

The other bogey, of high airport charges, is not fully true either. Airport charges went up in India after privatisation of major airports, but they're still lower than those in comparable countries.

Typical charges for a Boeing 747 on an international flight are around Rs 277,000 in Delhi and Mumbai - this is higher than Dubai's Rs 188,000 but lower than Changi's Rs 337,000 and Incheon's Rs 406,000. A study by TRL which indexes airport charges to 2005 levels shows that the hike in airport charges in India is among the lowest in the world.

The good news here is that full service carriers are planning to expand their low-cost services. The problem here, though, is that offering lower fares is not the same thing as having low-cost operations.

Will Jet Konnect, for instance, pay its employees the same salaries that low-cost carriers do and will it remove service trollies which add to the fuel-burn in an aircraft?