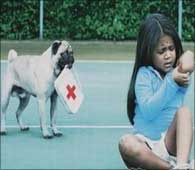 'Love Aaj Kal' was the latest Hindi film release this weekend. It is another love story from the Bollywood stable. However, its promotion is interesting.

Instead of using one standard visual across billboards, the film has used eight stills. This is surely a reflection of progress in vinyl printing technology - you no longer need quantities to get a cost benefit.

It's also a reflection of innovation - a creative cut-through device to make the film stand out. However, digging deeper, it also reflects the emergence of Indian branding into film promotion. The concept of having a standardised visual design in a very western concept of bringing unity; the eastern concept is actually keeping the spirit the same, while being flexible in form.

John Graham and Mark Lam in their thought-provoking piece 'Chinese negotiation' in Harvard Business Review provided insight into why American negotiators tended to fail in China.

In any negotiation process, an average American businessman went in with, say, ten points and discussed one point after another until resolution. He could never understand why a Chinese after reaching agreement to the first seven points, re-opened point one for re-negotiation.

Investigating the two cultures, Graham and Lam discovered differences in the way western and eastern cultures approached problem-solving. Americans think sequentially and individually, and so tend to break up negotiations into a series of smaller issues; the Chinese on the other hand tend to talk of all issues at the same time, skipping from one to the other. Fundamentally, the westerner - the American - is reductionist in thinking while the easterner - Chinese included - tends to be more holistic. One's focus is on objects; the other's on contexts.

Not surprisingly, brand building and advertising principles in the two parts of the world are different. It's hard to think of a western brand running two distinctly different-looking campaigns for a brand almost concurrently like Vodafone does in India.

For value-added services, there is the famous 'zoozoo' campaign on air; for service - 'happy to help' - the 'girl and dog' commercials. The commonality is the spirit of being 'warm, endearing, charming' and the logo at the end. For a culture comfortable with symbols and forms, this would be sending two different 'images' for the same brand.

Cadbury Dairy Milk's 'Real taste of life' campaign of the early 1990s is today part of branding folklore. It's often seen as both a 're-positioning' and a  brand 're-invention' exercise.

While the re-positioning is perhaps true - the marketer was attempting to make it relevant to a newer audience - the 're-invention' is true only from the western point of view. For the easterner, it was just a case of making the soul of the brand 'child-like happiness' relevant to a new audience. While the audience expanded, the spirit was the same and is perhaps still the same, even today.

The key to global campaigns transferred from one market to another has always been transfer of formats. In the print medium, it's often about where the logo has to be placed, what colours have to be used and what typefaces and fonts. 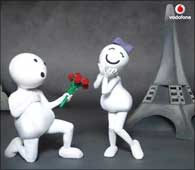 In the audio-visual medium, it's often the case of sticking to similar stories and definitely having the same base line. This has been the means of building brand unity.

Many global brands - McDonalds, Coke, Dove, Colgate - have been built by using such standardisation techniques and models. The same principles have often been adhered to by Indian (and eastern) marketers as much as marketing and brand thinking have emerged from the experienced and evolved West.

However, this has resulted in brands with global presence i.e. being present in many markets but with variable equities in each of those markets. Perhaps, restriction by form  symbols - limits the strengthening of equity at the local level.

As the centre of gravity of marketing moves eastwards and marketing becomes more and more localised, it may be worthwhile to revisit definitions and see the 'name, term, sign, symbol' to be a summation of a soul, spirit and values of a brand rather than the starting point.

The differentiation and the consumer connect comes from the soul and spirit rather than just the symbols. This may sound semantic but the difference is important to note. The soul should take precedence over the form!

This will enable brands to get liberated from forms and structures and become more holistic entities, the way many iconic brands unconsciously have managed to take shape in the East.

It allows brands to take cultural nuances into account and connect more strongly across individual localised markets. This could mean baselines can change, colours can change and so too can execution elements. Brands unfettered this way could actually become 'truly' global.

Even within a market, it allows for brand communication to take multiple forms to engage and excite consumers. In the 1980s, a Colgate commercial, 'Fights bad breathe, prevents tooth decay' ran for nearly a decade.

The Complan commercial, 'He is a growing boy' survived for more than five years and was still enjoyable. That was the age of single-channel media. However, media today has got more cluttered. We now live in a world of communication overload and creative fatigue.

There is constant need for renewal, and limiting oneself to new executions of the same format may not be refreshing enough. It's interesting to learn from how Vodafone (erstwhile Hutch) has played with formats to build itself, ensuring both the message and how it's said are constantly looking and feeling new.

Even the logo of Hutch changed colours during the period it was in existence and the brand equity only got strengthened rather than weakened. That's the way to go.

To conclude, there is something to learn from what 'Love Aaj Kal' has unconsciously done - different pictures but the same soul. Consistency in spirit is more important than consistency in symbols for brand-building. It is time to set our own Indian rules.

Something worth thinking about.