Interest rates may rise due to high fiscal deficit 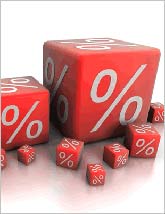 One of the ill effects of a high fiscal deficit, which leads to large borrowings, is high interest rate. To curb this problem, the government is shifting a large part of its borrowing to the first half of the fiscal.

This, according to the government's assumption, won't affect private sector borrowing and interest rates in the second half, when credit growth is likely to pick up.

Some experts suggest that a high deficit will not affect rates as the banking system currently has ample liquidity. But the captains of the banking industry expect rates to move up.

What shape the yield curve takes in the medium term remains to be seen, but this debate on interest rates leaves observers with some interesting questions.

The government wants to get back to the 9 per cent growth figure -- that's the argument for higher government spending. But, at the same time, lending rates are still at around 13 per cent, even though inflation is in the negative territory.

Lower rates, traditionally, have been a preferred tool for fighting a slowdown. So, something, somewhere is wrong with policymaking.

If rates remain the same, or go up, long-term sustainable recovery will be difficult. Advocates of higher spending argue that there is not much activity in the private sector.

So the government needs to intervene with higher spending to boost demand. But, in a situation where households and businesses are not confident about the future, a lower interest rate is required to bring them to the marketplace.

Other things remaining equal, you would agree that there is considerable difference between borrowing at 7 per cent and 13 per cent. For businesses, too, it is important to have a lower cost of capital, especially in times like these.

Currently, the prime lending rates are between 12.75 per cent and 13.25 per cent. Typically, banks will add a couple of percentage points as risk weightage, depending on the nature of the business.

This will take the cost of money to about 15 per cent. Now, the entrepreneur will expect some return for setting up a business, let's say 5 per cent. To get that return, the venture should have a return on capital employed (ROCE) above 20 per cent.

But there are few businesses that generate such returns. Among all listed companies on the NSE, with a market cap above Rs 250 crore, only 30 per cent had a ROCE over 20 per cent in FY08.

So, if the cost of capital is not brought down, it will be difficult for businesses to survive and new ones to come in. It is important that demand is supported by increased economic activity.

Or else, once higher government spending is withdrawn, we will be in trouble again as markets are not sufficiently developed to support themselves.