Who do investors turn to in case of fraud?

What do investors do when, as in the Satyam case, the management perpetrates a fraud on them, when independent directors are unable to detect the fraud, or when auditors either connive or are lulled into certifying the accounts as true? 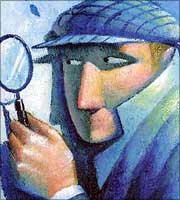 File against the company in the Company Law Board, you might say. But the law there does not recognise shareholders as people who have any locus standi in the matter, never mind if they lost Rs 5,000 crore (Rs 50 billion) on account of the collapse of the company's share price.

You could go to the police and file a case in the Economic Offences Wing, but that's a path whose success depends on whether your children and even perhaps grandchildren wish to pursue the case, after your time has passed.

In any case, there is little doubt that action by a group is always going to be taken more seriously than anything done by individuals. Sadly, as the investor group Midas Touch found out when it went to the consumer courts with a case against Satyam, its directors and auditors, the court was not inclined to take up the matter. Nor was the Supreme Court, given that the law does not specifically allow for the possibility of class action suits in the manner that it does in the United States.

In the case of Worldcom, for instance, all those involved in the fraud (including the investment banks which helped the company raise funds and therefore should have been aware of the true state of affairs), paid over $6 billion to investors to avoid lengthy trials and even larger potential damages.

In the case of Enron, where banks like Citibank paid out $2 billion in damages, the total settlement added up to over $7 billion.

In a way, India already allows class action suits since this, in the final sense, is what Public Interest Litigation is. If PILs are allowed, it might be asked, why bring in a separate law to allow class action suits?

But PILs tend to be cases where there is no obvious commercial interest involved, for it might be argued that investors filing suits because they have lost money is a matter of private (not necessarily public) interest.

It must be stated that the government has already accepted class action in principle, but the change has been made only in certain laws, not others. The telecom law, for instance, recognises consumer groups as an explicit body which can take action against telecom firms for deficient service.

Indeed, most telecom consultations actively seek the views of bodies representing consumer groups. The consumer courts, of course, recognise consumer bodies which, as a matter of course, file what can be classified as class action suits on behalf of nameless/faceless consumers.

The electricity law, on the other hand, does not recognise consumer groups as an explicit group. What this means is that, if the government is serious about the rights of small investors, it needs to make the necessary changes in the law to allow for class action suits.

This would ensure that all those complicit in large-scale fraud - like auditors - can be suitably punished. The current practice which involves dealing with the Institute of Chartered Accountants to deal with auditors, is long and so tedious, and in practice offers practically no remedy at all.