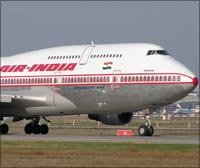 The austerity drive is dead. At least, at Air India. It is another matter that the state-run airline is gasping for funds and survival to keep from crashing.

Air India's top brass will now travel like kings with the austerity drive having been given a quiet burial. The airline issued an order on November 27 saying that the airline's chairman and managing director Arvind Jadhav and his spouse can travel first class on its flights, whether on work or on vacation.

Not only that, parents and children of the serving chief executive can travel business class during vacation on Air India flights.

Senior officers, who had earlier been told to fly only economy class, need no longer go 'cattle class'. The Air India order, in total disregard of the state of the airline's financial position, has reversed its earlier order and allowed officers of the rank of general manager and above to fly business class.

Deputy general managers too can fly business class when travelling for work, subject to availability of seats. 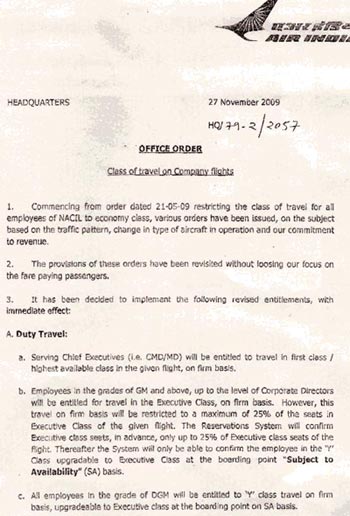 For the record, the national carrier incurred a loss of Rs 7,226 crore (Rs 72.26 billion) during the last two fiscals.

Even retired CMDs or MDs of Air India or Indian Airlines will be entitled to fly business class along with their spouses, parents and children. The same will apply to people who retired from the posts of DGM to corporate directors.

All other employees will, of course, fly economy class.

The order (HQ/79-2/2057) was issued 'with the concurrence of the CMD' on November 27 night even as the beleaguered airline was grappling with the issue of a pilots' strike.

The pilots called off the strike on Sunday night following assurances that they would get a pay hike.

The number of seats that Air India officials can occupy in the business class has, however, been limited to 25 per cent, with the rest being for the 'paying passengers'.

The latest AI order only lends credence to the charge made by opposition parties that the austerity guidelines issued by Finance Minister Pranab Mukherjee some time ago were just a case of 'bizarre tokenism'. Nobody really cares for cutting costs, least of all the cash-starved Air India.